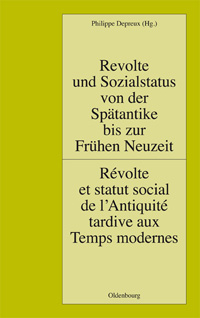 Forty years ago, a collection of essays on social status and pre-modern rebellion, especially one authored by continental scholars, most likely would have presumed that rebellion was grounded in class antagonisms. Twenty years ago such a collection might have insisted so strongly on the contingency of events as to decouple the political and the social altogether. The fourteen essays in this collection, originally presented at an October 2005 conference in Paris, take a stance that is at once more moderate and more modest. The revolts under consideration are studied not as illustrations (or falsifications) of universal historical laws, but as elucidations of particular local circumstances. The rebels who appear on these pages are fundamentally conservative, seeking not so much to remake the world as to preserve a traditional way of life against unwanted innovations. Most of them, indeed, are elites of one sort or another, and one of the social dimensions of greatest interest to the authors is the impact of political unrest on the subsequent circulation of elites. Thus, while social structure is no longer the fons et origo of political events, the political is nonetheless an occasion for an open-ended 'social reconnaissance,' here conducted more under the aegis of Pareto than of Marx.

Most of the essays focus on medieval western Europe, but all together the authors explore an impressively broad range of rebels and revolts, from the circumcellions of late Roman North Africa (Bruno Pottier) and seditions of medieval Byzantium (Jean-Claude Cheynet) to the German Peasants' War of 1524-6 (Werner Trossbach) and the urban rebels of the Catholic League during the French Wars of Religion (Olivia Carpi). It is encouraging to see at least one contribution on the non-Western world, François Martin's exploration of the failed rebellion of Sun En and Lu Hsün [Lu Xun] between 396 and 412 CE. And although the essays here are all written in either French (eleven) or German (three), they also draw extensively on recent scholarship in English.

On the central question of the precise relationship between social status and rebellion, we have clearly come a long way since the Porchnev-Mousnier debates of the late 1950s and early 1960s. None of the authors represents the revolt under study as class warfare, and several feel the need explicitly to deny that this was the case. It is widely recognized that most of these revolts, whether in Jin Dynasty China (Martin), in Byzantium (Cheynet), in early medieval Frankland (Philippe Depreux), in high and later medieval England (Jörg Peltzer), or in late medieval Hungary (Marianne Sághy), were of aristocratic inspiration. Even in the towns, the risings of medieval communes against aristocratic power monopolies in France (Alain Saint-Denis), Italy (Claudia Zey) and central Europe (Kai-Henrik Günter) were not attempting to overturn a 'feudal order.' Neither was the frustration of a blocked 'bourgeoisie seconde' at an entrenched parasitic magistracy the principal antagonism behind the rise of the urban Catholic League during the 1580s (Carpi). These rebels were instead trying to establish civic peace and protect town dwellers from brigandage, arbitrary exactions, or (in the case of the bourgeois Ligueurs) the threat to urban autonomy posed by the crown itself. In all cases, the uprisings' principal beneficiaries were themselves the members of a commoner elite.

Yet these revolts were never merely status conflicts between rival elites. Broad-based popular support was essential to the success of urban communal risings (Zey, Carpi); Uwe Israel's analysis of revolts in late medieval Rome observes more specifically that long-term growth in the economic power of commoners meant that by the 1450s a purely nobiliar revolt (in this case the attempted coup of Stefano Porcari) had no hope of success. Several of the contributions, especially Günter's essay on fourteenth century urban uprisings, also insist that we take rebel ideology seriously. Günter argues that these uprisings were touched off by aristocratic violations of a norm of equity, here understood as a kind of corporate parity, in contradistinction to the modern sense of universal equality. This concept of equity found expression in the mutual oath of the citizenry to the city and was an important foundation of the sense of personal honor. Thus, though led by guilds which were themselves inegalitarian corporations, the revolts were still political processes which enjoyed the support of large numbers of the citizenry.

Furthermore, the rejection in these essays of a class interpretation of pre-modern rebellion by no means entails an endorsement of the Mousnieriste vision of a harmonious society of orders in which those at the top of the hierarchy personify the common good. Thus Vincent Challet's thoughtful piece on late medieval French peasant revolts accepts that these uprisings were predicated on local vertical solidarities and saw substantial participation by the lower clergy, judicial officials and the lower nobility. At the same time, Challet emphasizes the profound ambiguity of the political position of these rebel elites. As privileged interlocutors with royal power, they were indispensible to the rural masses, and could in any case hardly afford to stand aside from the uprisings without undermining their traditional position of local political dominance. They were just as useful to the crown, however, as brokers for negotiations with the peasantry, a role which helps to explain the relative clemency (i.e. by comparison with the fate of peasant rebels) with which they were treated during the retributions which inevitably accompanied the final suppression of these revolts.

Similarly sensitive analysis distinguishes Werner Trossbach's article on the social context of the German Peasants' War. The rebellion was clearly anchored in the village communal institutions. Its programmatic statements primarily reflected the interests of peasants, and the rebels often expressed profound and articulate hostility to aristocratic elites (Trossbach is less categorical about the economic origins of the Peasants' War than historians once were; he sees the case for a pre-1525 seigneurial reaction as still unproven). Yet the late medieval German village commune was marked by considerable internal social differentiation, with the most important communal offices dominated by a village elite and often administered for their personal benefit. The rural elite were also over-represented in the revolt's leadership; the rebel drive to protect the commune often looks like an elite effort to protect a privileged status. Since it would not have made sense to engineer a supraregional conflict for the sake of protecting local interests, some historians (among them the present reviewer) have tried to distinguish an earlier, more moderate phase of the revolt led by village elites from a later, more radical phase in which the rural poor, who had much less of an investment in the traditional sociopolitical order, came to the fore. Trossbach sees some virtue in this approach, but cautions that a two-phase model is only applicable in some regions.

The volume is generally well-produced, although the final page of the first essay (Pottier) has been omitted, and the copy-editing has sometimes been a bit careless, especially with regard to the spelling of historians' names. I am myself unbothered to be referred to as 'Gowind;' the Virginia-based scholar of the French Wars of Religion may perhaps be less amused to see his name rendered as 'Mack Pee Holt.'