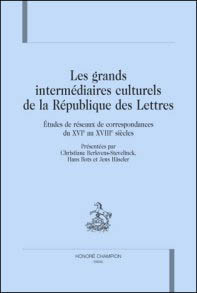 Over the last twenty years cultural and intellectual historians have taken an ever growing interest in the structure of the early-modern Republic of Letters, and none has contributed more to our understanding of its evolution than one of the three editors of the volume under review, Hans Bots. The present work, prefaced by a short editorial introduction, consists of a series of chronologically-arranged discrete studies of the correspondance networks of fifteen of the leading members of the Republic across the period 1500 to 1750.

The book begins with Erasmus, uniformly identified as the father of the Republic of Letters (essay by Chris Heesakkers), and ends with Samuel Formey (1711-97), the French Huguenot refugee, who was for many years secretary to Frederick the Great's Berlin Academy (essay by Jens Häseler). Each chapter gives brief details of its subject's life, then describes the size, geographical spread and publication history of the scholar's surviving epistolary exchanges. Most of the chapters are accompanied by useful maps and tables, although it must be said that the detail on the map at the end of Nora Gädeke's study of Leibniz (301) cannot be read by the naked eye.

The correspondence circles surveyed fall into two kinds. The first, epitomized by the networks of Erasmus and Marin de Mersenne in the first half of the seventeenth century (essay by Hans Bots), were the circles of private individuals, whose role as intermediaries was largely determined by their contemporary renown as scholars or their geographical location (Mersenne was based in Paris). The second, the larger number, were circles orchestrated by individuals whose 'drawing-power' was greatly enhanced by an institutional attachment. Either, like the Bremen born secretary to the Royal Society in the 1660s, Henry Oldenburg (c. 1617-67), and his opposite number at the Paris Académie des Sciences, the abbé Jean-Paul Bignon (1662-1743), they were officers of the new scientific academies (essays by Jean-Pierre Vittu and Françoise Bléchet); or, like Otto Mencke (1644-1707), they were editors of scientific journals, in Mencke's case, the editor-in-chief of the Leipzig Acta Eruditorum (essay by Huub Laeven).

Not surprisingly, Formey, who was both a scientific bureaucrat and journalist (he edited the Bibliothèque germanique) had the largest known number of correspondents (2,427; Erasmus only had 666). Institutionalised correspondence circles (provided they were of the right kind) understandably also usually had the widest geographical spread. Private circles tended to be more circumscribed. Gassendi's friend, Nicolas Claude Fabri de Peiresc (1580-1655), who was simply a lawyer based at Aix-en-Provence, had predominantly a Mediterranean network (essay by Peter Miller); Johann Christoph Gottsched (1700-66), also the centre of a private correspondence circle for he drew little benefit internationally from the fact that he was professor at the University of Leipzig, mainly corresponded with the Protestant parts of the Holy Roman Empire, even if, admittedly, he was one of the first republicans to have important contacts with eastern Europe (essay by Detlef Döring).

Private circles, too, with an international character, appear to have been difficult to form unless the individual travelled widely in his youth; the intellectual Grand Tour, studied by Willem Frijhoff and others, was a prerequisite of later epistolary exchange. Secretary Bignon, though, could correspond with large parts of Europe, including the largely excluded Iberian peninsula, without ever having left the French capital. Furthermore, most private correspondence circles included many letters from family members and were thus not exclusively focused on the learned interests of the scholar at their centre (though in Huygen's case his close family was also part of his scholarly network: essay by Edwin van Meerkerk).

This division into private and institutionalised correspondence circles, however, seems to have only coloured their character to a certain degree. In all cases, it is necessary to distinguish between major and minor correspondents, those with whom the scholar had a lengthy epistolary conversation and those with whom contact was ephemeral. The former were always few in number, confirming the view of the sociologist of science, Bruno Latour, that scientific sets, 'centres of calculation', are always small. Mersenne for one only exchanged ten letters or more with eighteen of his 100 correspondents; and fifty or more with two (one of whom was Descartes) (168-69). In the pre-modern period, the difficulty of keeping in touch was made all the harder by the vaguaries of the nascent postal service, and the fact that the receiver of a letter had to pay the cost of delivery: the philologist, Graevius, spent a fifth of his salary on post (20).

In all cases, too, there is uncertainty as to how much of an individual's correspondence has survived. Only two or three of the fifteen had part of their correspondence published during or immediately after their lifetime. Erasmus may have been the father of the Republic of Letters but his readiness to place his correspondence in the public domain (ever the self-publicist, as Lisa Jardine emphasised in her 1993 biography of the humanist) was not a characteristic of later republicans. Letters between the learned were not necessarily confidential, for they were often read out to other érudits (see the essay by Jérôme Delatour on the brothers Dupuy and their learned circle in Paris in the first half of the seventeenth century), but their contents were often religiously and politically heterodox and were not for all eyes. In consequence, many letters, it is assumed, have gone missing or been destroyed. Above all, the archives frequently contain only incoming letters and it is seldom that two sides of a correspondence survive (in the case of Mersenne only three of his eighteen close contacts).

As a result, the authors are all aware that their sociological pronouncements must always be tentative. Those who are working from printed collections (and a large proportion of the fifteen individuals' correspondence is published or in the process of publication) have the confidence that they are studying all the letters available. But those, like the author of the study on Mencke, who are piecing together a correspondence from the survivals in many archives over Europe, are not even sure that they have exhausted the search.

The essays in this collection are clearly written and extremely informative. For the most part they contain information about the correspondence networks of specific scholars, which is not easily obtainable elsewhere. The book then is a treasure trove, one which will be frequently mined by anyone interested in the Republic of Letters in a European perspective. The volume, though, is not without its limitations.

First, the volume has a narrow geographical focus. With the exception of Henry Oldenburg, all the individuals surveyed were based in France, the United Provinces and the Holy Roman Empire. Were it not for the total absence of Italy (where there were many significant members of the imaginary state), it might be concluded that the editors thought the boundaries of the early-modern Republic of Letters were coterminous with those of the original EEC. This is unfortunate because there is a lot of ongoing work on the correspondence networks of the most prominent republicans in Britain and Ireland especially, and this would have been a good opportunity to introduce this research to a wider European audience. This work, though, seems to be unknown to the editors. There is no reference in their introduction, for instance, to Michael Hunter's edited volume, Archives of the Scientific Revolution. The Formation and Exchange of Ideas in Seventeenth-Century Europe (1998), which has chapters on a number of these projects, particularly Sheffield University's online publication of the papers of the mid seventeenth-century 'intelligencer', Samuel Hartlib (d. 1670).

Secondly, the correspondence networks discussed, even within the narrow geographical framework that the editors privilege, seem to have been chosen rather arbitrarily. All the fifteen individuals were prominent members of the Republic of Letters in their day, but they were not necessarily its most famous representatives. There is no chapter, for instance, on two of the most important correspondence networks of the eighteenth century in the French and German speaking worlds - that of Voltaire (1,392 correspondents) and that of the German Swiss physiologist, bibliographer and naturalist, Albrecht von Haller (1,200 correspondents). Voltaire's network, of course, is well known through the 108 volumes published by Besterman (1953-65). But Haller's is only now becoming accessible to historians, thanks to the twenty-year-old Bern Haller project, which has produced inter alia the two-volume Repertorium of his letters, published by Schwabe in 2002. Like the Hartlib project, there is no reference to the extremely important ongoing work on Haller in any chapter in the volume.

Thirdly, the information provided in the fifteen essays, though useful, is not cutting edge. Over the last twenty years the structure of early-modern correspondence networks has been studied in extenso. While the essays reveal interesting details about the networks of the individuals selected, they do not greatly alter the overall picture that can be gleaned from existing monographs. It is time for the study of the Republic of Letters to move in a new direction, but there are few signs in this volume that its historians are contemplating a change of focus. One obvious way forward, given the long established interest in discourse history in the Anglo-French world, would be to study the rhetorical structure of the correspondence of leading republicans, in order to understand how it became possible for individuals of different nations, confessions, and social backgrounds to have meaningful exchanges with one another. Of this possibility, though, there is really only one sign in the book: Antony McKenna's essay on Pierre Bayle, which discusses how the Huguenot initially imitated the style of Guez de Balzac, but then adopted a more ironic style associated with figures at the French court of Louis XIV, such as La Fontaine (327-29).

This, then, is a book that will be given an honoured position on the bookshelf of the early-modern cultural historian and will be well-thumbed. But it is a work in its scope that looks back to the last decades of the twentieth century, and is best a summation of where the historiography has reached.