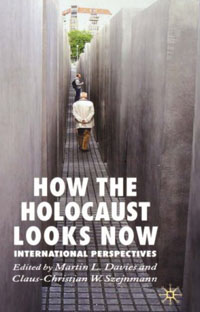 The last fifteen years have seen a significant growth of scholarly interest in the Holocaust. Following an initial focus on empirical analysis on the atrocities of the Nazi regime, a whole branch of study has turned to issues of memory in recent years. Why did societies wait for such a long time to study the horrible past systematically and try to make sense of what happened? The collection of essays at hand, edited by Martin Davies and Claus-Christian Szejnmann, focuses on the role of the Holocaust in such different fields as popular memory and commemoration, representation in art and literature, and survivors testimonies and education. The volume struggles a number of imbalances: it presents itself as an international project, yet eleven of twenty-three contributions have German authors and five are written by Swedish contributors (all of them associated with a single institution). Some of the authors offer descriptive accounts, while others pursue a more analytical examination. Also, some authors' attempts to relate their analyses to theoretical concepts are more successful than others. In the following, I shall discuss the strengths and weaknesses of the volume in greater detail on the basis of four articles, concentrating on the more successful ones, which deserve the attention of wider public.

Olaf Jensen examines how different German postwar generations perceived their families' past in the Second World War. The essay summarizes a larger project that spawned a vivacious discussion in Germany upon its publication in 2002. [1] An interdisciplinary research team conducted over 180 interviews with 40 German, non-Jewish families; they talked to grandparents (witnesses), their children, and grandchildren. Examination of the interviews produced some genuinely ironic results. According to the author, the generation of grandchildren tend to see their grandparents as "good guys," largely ignorant about the Nazi crimes. The grandparents, however, provide a more complex narrative and often acknowledge their own crimes as soldiers or their knowledge of them. These findings are even more striking, as they occur before the background of the thorough Holocaust education common in German schools. The second and third generations of interviewees were well aware of the criminality of the Nazi regime. Jensen explains this paradox with the way the children assign meaning to family narratives. Endowing individual narratives with meaning takes place within a social discourse that precedes prevailing patterns in education and commemoration. Children understandably do not want Nazi grandparents and unconsciously attribute aspects of the narratives of suffering they know from school to their grandparents.

Jensen's article is particularly rewarding because it makes us aware of the extent to which German grandchildren's treatment of family narratives is nothing specifically German. All narrators strive to give their narratives identity and inner logic; these stories are shaped by the autobiographic specificity of the protagonist ("my grandfather was the only lucky one who survived the battle"). We can see the same patterns in other narratives, for example, in those by Holocaust survivors. Veronika Zangl, whose article I discuss below, mentions similar aspects. These findings are also confirmed in Isabella Matauschek's essay on interfamilial narratives in Denmark and the Netherlands. As in the German case, Danish and Dutch youth interpret the past in a black-and-white manner and attribute to their grandparents the roles of overwhelming heroes. To be sure, there are national specificities: In the Netherlands and Denmark more than in Germany, the Holocaust in general and the story of Anne Frank in particular provide the dominant frame of reference. Family memories persist, but the ways in which they are interpreted and by which they are assigned meaning is influenced by a larger framework about the Holocaust.

While Jensen and Matauschek analyse the shifting of memory as a phenomenon per se, Barbara Törnquist Plewa's essay takes a more partisan and alas less discerning approach. In her contribution, she analyses how non-Jewish inhabitants of Szydłowiec, a town in Mazovian Poland, dealt with the memory of the large Jewish community that had lived there before the war. After years of neglecting "the Jewish marks in the urban landscape" (117), as she calls them, young Warsaw intellectuals began to discover the Jewish cemetery in the 1970s. This, together with post-1989 signals from the Polish government to take care of the Jewish heritage, changed the municipal leadership's attitude toward the town's Jewish past. The author argues that, on a small scale in Szydłowiec and on a large scale in Poland as a whole, Jewish memory is currently becoming part of the Polish national memory. Törnquist Plewa explains Szydłowiec's historical amnesia as a consequence of Polish anti-Semitism and the local population's belief in the early postwar era in the existence of a close link between the communist regime and Jews.

Plewa's article is problematic for two reasons: the superficial usage of a theoretical concept that she misunderstands, and a tendency to draw simplistic conclusions. The goal of the article is to "find out how local decision makers organise collective memory, of what they choose to remind people, and what is suppressed" (116). For one, collective memory is never explicit, nor can it be planned. Inherent to a group identity, it is an emotionally charged, instrumentalising view of the past used to make sense of the present and of the "self." To explain it, we should analyse how and what people remember, if and in what way they commemorate a different group, and try to find its function. As far as the latter task goes, much material remains to be studied regarding Polish-Jewish postwar remembering and interaction, but it demands greater openness for complexities and a more thorough theoretical background. [2] I find Törnquist Plewa's depiction of the present Polish interest in former Jewish neighbours as a positive development ill-conceived: Does remembering minority groups make us better people? And can this sort of "memory" really serve as an analytical category? Moreover, the author's moralizing approach leaves the reader uncomfortable. For example, she relates how local youngsters used the site of the Jewish cemetery as a venue for their "drinking orgies" (120). Marking this activity as symptomatic of anti-Semitism without further discussion of the significance of cemeteries in the town seems out of place to me: Teenagers worldwide look for an undisturbed spot to experiment with alcohol; it is a rite of passage.

In contrast, the last piece to be mentioned here makes an abundant use of theoretical concepts, and is possibly the most exciting one in the volume. In it, Veronika Zangl discusses the nature of survivor narratives and problems of Holocaust representation. The author argues that the Holocaust narratives, to a large degree, are influenced by surrounding social structures. Holocaust survivors, like all narrators, relate to existing narrative frames in formulating their individual narratives. What makes a narrative an individual one is the specific way in which the material is arranged. According to Zangl, Holocaust testimonies are a narrated entity, but at the same time they represent a narrative void. Existing language is not capable of capturing the horror of one's experience, and words are pushed to the edge of their possibilities, and become comical. Before the Holocaust, meta-narratives steered individual and collective narratives. If old narratives failed to do justice to fundamental changes in society and individual life, new "great stories" (such as the Odyssey) emerged. Referring to Jean-François Lyotard and Walter Benjamin, Zangl argues that the time of "great stories" had passed in the high modern era, at least before the outbreak of World War II. Hence, the survivors' failure to describe the Holocaust "adequately" appears to have two causes: the nature of event itself, and the specifics of narrative framework conditions. At the same time, the Holocaust can be depicted by the eyewitness on the poetic level: it can be narrated, but not described.

Zangl's article offers much food for thought. She makes clear that Holocaust testimonies share the same factors of every autobiographical story: the construction of identity, narrative frameworks, and the use of literary genres, topoi, and motifs. I am not entirely persuaded by her argument about the Holocaust as narrative void, in which existing languages becomes unsuitable to tell others about the Holocaust. Some in-depth analysis of examples would help readers to understand the argument better. It deserves readers' attention.

Overall, Zangl's text, like those by other authors, would have benefited from more stringent editing. Most of the authors are not native speakers of English and come from different cultures of academic writing, some more easily accessible than others. It is not reasonable to expect the reader to read passages repeatedly to make sense of them. Although the editors sought to reach beyond a specialist readership, they did not achieve this goal, and the price of the volume is too high to reverse the impression created by the essays. [3]

Hence, my reaction is ambivalent. The book offers several remarkable contributions, making intriguing scholarship available in English. Altogether, the volume is a mélange of essays of differing heuristic quality, level of abstraction, and consistency. The more felicitous essays offer readers insight into the current state of research on the historical culture of the Holocaust and its methodological and conceptual trends. Moreover, the gaps in consistency mentioned above are possibly not only a problem of the volume at hand, but also of the entire research branch. In future, such specialised collections of essays should seek to pursue greater theoretical and conceptual precision.

[3] See the CfP at http://hsozkult.geschichte.hu-berlin.de/termine/id=2627