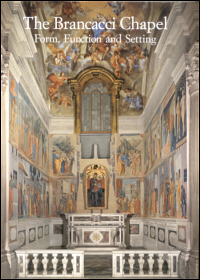 This volume is based on papers given at a conference held in 2003 at the Harvard University Centre for Italian Renaissance Studies in Florence. As well as an introductory essay by the editor, Nicholas Eckstein, it contains nine contributions, more-or-less equally divided between art historians and historians, each of whom brings his or her particular expertise to bear on the interpretation of the Brancacci chapel. This format is partly reminiscent of the Cambridge University Press Masterpieces in Western Painting series, which brings key essays on individual works of art together in the same place (the volume on Masaccio's Trinity, for example, was published in 1998). The important difference here is the opportunity for cross-fertilisation between contributors that a conference brings, and as with other edited volumes, gives us a snapshot of the recent state of the field.

There was no attempt, as the editor makes clear, to enforce a "unanimous vision" amongst the contributors, and it is true - as with most edited volumes - that this is something of a mixed bag. However, several of contributions do share a similar intellectual approach, that could be described as the "religious turn" in Florentine fifteenth-century studies. It seems that interpreting devotional art mainly in terms of patronal identity and, particularly, politics, is out of fashion. Indeed, Anthony Molho's 1977 article on the politics of the chapel frescoes - perhaps the classic article on the interpretation of the chapel to date - comes in for some reassessment.

Megan Holmes and Peter Howard's essays, for example, place the spotlight firmly on the friars as key influences on the iconography of the frescoes by Masaccio and Masolino. Holmes focuses on the juxtaposition of money and miracles that she sees as a central theme of the chapel. She considers this in relationship to apostolic poverty, and also stresses the importance of negotiation between church authorities and lay patrons in the planning of chapel decoration. Howard argues convincingly for the "open" reading of the frescoes as a dialogue between the painted image and preached word, adding to our knowledge of the kind of "period eye" that might have viewed the chapel. I use this term advisedly - thirty years after Baxandall's Painting and Experience in Fifteenth-century Italy, this volume indicates that we are still learning much from his approach towards devotional imagery. Rona Goffen takes a fresh look at a classic comparison in art historical pedagogy, placing the differing styles of Masaccio and Masolino in the Brancacci's Temptation and Expulsion firmly within a contemporary devotional context. She relates their message to the iconography of the rest of the chapel and argues that they should be seen, like St Peter, as "Christ's gatekeepers [...] they embody the promise of redemption of all sinners". Carl Brandon Strehlke also reconsiders the perceived differences between the two artists' styles, showing why Masolino's skill in landscape and portraiture may have made him attractive for the commission, and how that by working with Masaccio, together the two artists created a new sober "Carmine style" that "soon became a Florentine export".

Local religious practice is also highlighted by several contributors. Christa Gardner von Teuffel, for example, considers how Carmelite and lay confraternity's devotional needs help to explain the presence and possible contemporary meaning of the thirteenth-century devotional panel known as the Madonna del Popolo, the chapel's altarpiece since at least 1460. An emphasis on the lay community is also stressed in Eckstein's essay, where he considers "the local context" of the chapel, especially the importance of charity in this deprived area of Florence. He argues that we can understand the meaning of the frescoes more fully if we take into account the career of a neighbourhood figure, the Blessed (later Saint) Andrea Corsini who, like St Peter "formed part of the gallery of familiar symbolic personae that inhabited the Florentine collective memory". In a different take on neighbourhood, Cecelia Frosinini (who writes the only chapter in Italian), discusses the relationship of painters to their home and work neighbourhoods, and uses the scant evidence available to consider the links between Masaccio and Masolino and the quarter of Santo Spirito. It was good to get a concrete sense of the impact of the neighbourhood on the Carmine's appearance in Nerida Newbigin's essay. She discusses how the annual Ascension festival staged in the church effectively dominated the space for much of the year with the scenery for the spettacolo. Then, using a later fifteenth-century play of St Peter and Paul, she goes on to consider how viewers may have understood the role of these saints in the Brancacci chapel, particularly after their miraculous intervention in the Battle of Anghiari in 1440.

Perhaps Dale Kent's essay on Felice Brancacci, the likely patron of the chapel, however, is the best indication of how far the interpretative focus has shifted. Here she eschews the close examination of Felice's political affiliations and instead concentrates on an analysis of his devotional life, as revealed in his letters. Indeed, Kent - quoting Eve Borsook approvingly - argues that the aim of chapels was to articulate a broad religious vision, and that the role of politics as underlying the iconography of chapel decoration has been overstated: "in the fifteenth century, debates took place rather in civic councils or in the exchange of learned treatises than in devotional narratives on the walls of chapels". Only politics understood in the broadest terms - the importance of charity and piety for civic wellbeing - is considered here.

This emphasis is welcome in many ways. It is good to see lay piety taken seriously, emphasising that the key motivation for patronal investment in chapels and churches was a religious one. Particularly important is the acknowledgement of the role of the friars themselves, who have sometimes played a bit-part in discussions of the renaissance decoration of churches, implied to be the passive recipients of patron's demands. This volume certainly sheds more light on the activity of the Carmelites and credits them with real agency. It also allows commentary to shift away from the Brancacci family and other members of the Florentine elite, to consider the broader community of believers in the neighbourhood of the Carmine, including the many confraternities that met in the church.

There is always potentially more to say in edited volumes of this type, and there were areas that perhaps could have been covered in more detail. It would have been useful, perhaps in the introduction, to establish more explicitly what we know about the actual appearance of the chapel for much of the fifteenth century, and how it changed over this time, something that is rather papered over in some of the iconographical analyses here. For half a century or more, the chapel was left incomplete. It was probably defaced for political reasons sometime after 1434 when the Brancacci family were expelled - chapel walls could, it seems, sometimes be implicated in political debate. The frescoes were only "finished" by Filippino Lippi in the 1480s, complete with several new portraits of local dignitaries in the Raising of the Son of Theophilus. Indeed, the unfinished nature of the chapel may well have had implications for its suitability for a place of worship and veneration of an important icon. Both Newbigin and von Teuffel give a picture of a church that would have been rather shoddy in this period - cluttered with equipment for annual spettacoli, dogged by a leaking roof and a lack of money for repairs, and looking rather ramshackle in comparison with the grand new church of Santo Spirito being built nearby. The editorial decision not to address the 1480s additions is understandable, though perhaps a missed opportunity in that these later changes shed light on the original appearance of the chapel; it may have been instructive to consider in more detail how the changes in the chapel over the century reflected broader religious, artistic and social developments at local and civic levels. Moreover, the long genesis of the volume is sometimes apparent in a bibliography that is not always completely up to date, with little engagement with the publications on Florentine patronage of the last five years or so. One contributor claims that the 2002 Cambridge Companion to Masaccio was not available at the time of writing, for example, despite the fact that this volume was published in 2007.

Overall, however, the editor should be congratulated in putting together a volume that will be essential reading for students of fifteenth-century Florentine painting, and is valuable both in adding to the state of knowledge about the Brancacci chapel, and in providing thought-provoking new analyses of the frescoes.