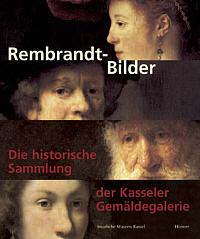 For proof that art historical study can be physically demanding as well as intellectually rewarding, one has only to make the pilgrimage to Schloss Wilhelmshöhe, the imposing classical palace, set in its spacious park that houses the Kasseler Gemäldegalerie. Hiking up the hill from the tram stop on a hot summer afternoon, the tired traveler might be tempted to wonder whether a leisurely browse through the exhibition catalogue might have sufficed. But once inside, all doubts are dispelled. An hour in front of Rembrandt's Jacob blessing the Sons of Joseph alone repays considerable caloric investment.

34 Gemälde "Rembrandts" in Kassel! Die historische Sammlung von Landgraf Wilhelm VIII. (20 May - 20 August 2006) was the second in a trilogy of exhibitions held at the Gemäldegalerie in 2006, the "Rembrandt Year" marking the four-hundredth anniversary of the master's birth. The show followed the focus exhibition Rembrandt in contrast - The Blinding of Samson and Jacob blessing the Sons of Joseph (3 November 2005 - 5 February 2006) and overlapped with Rembrandt's Landscapes (23 June - 17 September 2006). While the latter show, the first on this topic since the exhibition of Rembrandt's graphic landscapes held in Washington in 1990, caused a greater stir, 34 Gemälde offered a special opportunity to viewers interested not only in Rembrandt, but also in the history of taste. By reuniting paintings assembled in the eighteenth century, some of which are now considered to be by other hands, the exhibition offered a rare opportunity to see through the eyes of an earlier generation of connoisseurs.

With twelve Rembrandt paintings to its credit, the Kasseler Gemäldegalerie houses one of the largest collections of the master's painted works in Germany. The history of the collection and its impact mirror the vicissitudes of Rembrandt connoisseurship over several centuries. Of the original thirty-four "Rembrandt" paintings brought together by Landgraf Wilhelm VIII von Hessen-Kassel largely between 1748 und 1756, two thirds are either lost or no longer attributed to the master himself. The exhibition catalogue presents both a reconstruction of the original collection of the Landgraf and a study of the existing Rembrandt paintings in the Gemäldegalerie. For this reason, it is divided into three parts. The four essays at the beginning (discussed below) are followed by a systematic catalogue of the works in the historical collection (77-237) and an appendix of the other paintings by Rembrandt and his followers held at the Kassel museum since 1744 (240-270). Added to this, the essay by Everhard Korthals Altes (27-46) supplies a representative inventory of 1752 that lists all of the paintings thought to be by Rembrandt appearing at auction during the eighteenth century (43-46).

The first two essays prepare the reader with useful background information on the historical collection. Thomas Ketelsen's introductory remarks on Rembrandt's style and its teachability in the context of the exhibition are predicated on the Landgraf's special interest in the painter's brushwork (8-26). As Everhard Korthals Altes, in the second essay, makes clear, Landgraf Wilhelm VIII admired the rough execution displayed by Rembrandt's late works - an audaciously unconventional preference for a collector of his era. The third essay, contributed by the initiator of the exhibition and curator of Dutch paintings in Kassel, Gregor J. M. Weber, addresses how eighteenth-century connoisseurs differentiated between paintings by the master himself and by his students, and in turn sheds light on Thomas Ketelsen's analysis of Rembrandt's atelier and its dynamics (47-64). In focusing on the terms handeling and modus and their aspect of inheritance, Ketelsen is able to add new insight to recent research on Rembrandt's students by other scholars such as Ernst van de Wetering, Walter Liedtke and Dagmar Hirschfelder. [1]

The way in which Wilhelm's unusual collection was brought together forms the main content of Korthals Altes' text. Drawing upon the correspondence Wilhelm maintained with art dealers and agents, Korthals Altes paints a lively picture of the trade in Dutch art during the eighteenth century. Continuing in this line, Gregor Weber investigates the criteria for acquisition and arrangement of paintings in the Galleriesaal. Because there is no document that can show us the hanging during Wilhelm's lifetime, Weber calls upon an inventory of 1775 and the first catalogue of paintings from 1783 to reconstruct the context in which Rembrandt's paintings were displayed. By this means, the author reveals what the arrangement of the paintings can tell us about the eighteenth-century response to the Dutch master's art. In the first place we learn that pictures thought to be by the same artist (in this case Rembrandt) were often arranged as pendants - a practice that motivated certain acquisitions. A prominent example is the combination of the two large history paintings Jacob Blessing the Sons of Joseph of 1656 (cat. 30) with The Blinding of Samson from around 1636 (cat. 32). The latter, now known to be a copy, must have been bought in 1755 with an eye to the first, which is now the highlight of the collection.

As several copies prove, the majestic Jacob Blessing the Sons of Joseph was already popular two centuries ago. The closing essay by Julia Gierse documents the esteem individual paintings by Rembrandt enjoyed on the basis of records of copies between 1866 and 1990 as they were compiled by museums (65-76). This is a new and fascinating approach giving insight into the "Rembrandt-Bild" developed in the century that rediscovered Rembrandt as an introspective genius. The results are mostly predictable, but include some surprises: Rembrandt was the most copied artist in the gallery, while the painting of the Apostle Thomas (cat. 6) emerges as the most copied painting until 1923, when it was revealed to be not by Rembrandt, but by Nicolaes Maes. Not only Wilhelm VIII but later beholders assumed that such a masterful representation of pensiveness only could have been created by Rembrandt himself.

The above-mentioned works are extensively discussed in the section of the catalogue devoted to the historical collection of Landgraf Wilhelm VIII. The listing follows the order of Wilhelm's inventory (begun in 1749), and gives both the modern and the original descriptive titles of the thirty-four putative Rembrandt paintings. The catalogue provides us with detailed information on provenance, restoration, subject matter, interpretation and state of research of each work. Given the breathtaking idiosyncrasy of Rembrandt's touch, so much admired by Wilhelm VIII himself, the book is no substitute for a first-hand view, but it will take its place as an insightful case study in the history of collecting Dutch art.