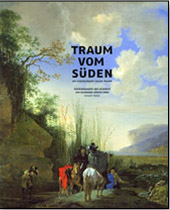 This exhibition catalogue includes the paintings of 48 artists of northern Europe whose work reflects the real or imagined landscape of Italy, from the 16th and 17th centuries. A collaboration of the Gemäldegalerie der Akademie der Bildenden Künste Wien and the Liechtenstein Museum, with loans from many public and private collections, the group of paintings exhibited is especially interesting because it features many lesser known artists and paintings. The catalogue covers a broader range than the 2002 exhibition at Dulwich Picture Gallery, and the publications complement one another. [1]

The introduction sets forth the meaning of the "south" for artists of the Netherlands in the sixteenth century. Exchanges between the north and Italy begin early. Two of the most famous instances of fifteenth century Italian patronage of Netherlandish artists are Hugo van der Goes' Portinari altarpiece, destined for the family chapel of Tommaso Portinari in Santa Maria Nuova, Florence (now in the Uffizi), and the Last Judgement Triptych painted by Hans Memling for Angelo Tani, which was unfortunately lost to pirates at sea. Michelangelo's Bruges Madonna, purchased from the artist by Jan Moscroen and still in situ is the best known Italian sculpture in the north. These cases demonstrate a reciprocal appreciation by patrons. Yet artists themselves were fascinated by the works of the other region, and would themselves travel. The northerners went to the south, and in fewer numbers and usually due to patronage, the southerners to the north. The northerners had many reasons to go south: to enjoy the weather and brilliantly warm light; to study Renaissance Italian art and the ruins of antiquity; to draw and paint landscapes as settings for history, mythology and genre; and to have experiences that were free from the constraints of their native countries.

Intelligently organized into eight parts, according to type, the catalogue commences with the discovery of antiquity in the sixteenth century, from Marten van Heemskerck to Johann Heinrich Schönfeld. The second part concerns artists who painted luminous scenes with shepherds, travelers, hunters and low life; Herman Saftleven, Jan and Andries Both, Claude Lorrain, Jan Asselijn are among those most identified with the actual features of the campagna. In the third part, the landscape is a setting for the gods, both pagan and Christian, with paintings by Hendrick van Balen, Cornelis van Poelenburgh, and Bartholomeus Breenbergh. The fourth part presents the image of Italy at second hand, by artists who never went there: Nicolaes Berchem, Adam Pynacker, Aelbert Cuyp and others. The fifth section, devoted to low life and street scenes in Rome, includes Pieter van Laer, Breenbergh, Asselijn, and Both. The following section examines the social habits and status of the Bent Vueghels; comprising the northern artists in Rome, the Bent was not an association with statutes, although it included those who interacted with the Roman establishment of artists, the Accademia di San Luca. Coastal scenes with boats are in the seventh part. Finally, paintings with an ordered and calm structure of classicistic tendencies are in the eighth group. A contemporary artist, Valery Koshlyakov, represents Roman antiquity in the present with an installation of a temple, combining classical and postmodern elements.

There is quite a bit of overlap of artists in these eight divisions. Berchem, who apparently never went to Italy, and Dujardin, who went only late in his career, appear in several sections. How these and other painters could create scenes that looked as if they depended on the Italian experience is no mystery. Dutch artists returned from the south with drawings which they shared with friends. And why such luminous landscapes were so popular in the Netherlands would seem to depend on a taste for beautiful light, whether or not it was Dutch.

There is no comprehensive survey of the northern artists who went south, or of northern artists who painted as if they had gone south. Such a project would be far larger than any single volume. It would include many more artists, of whom some of the more interesting are Jan van Scorel, Hans von Aachen, the Caravaggisti, Adam von Elsheimer, Pieter Lastman, and Joachim von Sandrart. It would indeed be useful to have a chart of those northern artists who traveled south and their itineraries. And on the other hand, it might also be extremely useful to have a chart of those Dutch artists who did not travel south, for among these is Rembrandt, who studied Italian art and antiquity with an intensity unmatched among his fellow Netherlanders.

This catalogue is very welcome, for it includes some overlooked and fine painters, such as Anton Goubau and Lieve Verschuier. It examines the essential topic of what the northerners saw in Italy that was specific to the place, how they incorporated those aspects of reality into their art, and why the Italian experience was so vital to their art.