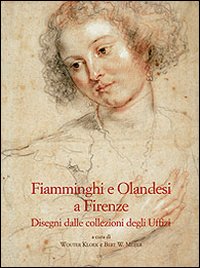 The works by northern artists in Italian collections are finally receiving the attention they deserve. Much credit belongs to Bert Meijer, who initiated the project of cataloguing northern art in Italian collections, and recently retired as director of the Dutch University Institute for Art History in Florence. The fiftieth anniversary of the Dutch Institute is celebrated by this exhibition and accompanying catalogue, edited by Meijer and Wouter Kloek, with contributions by 45 other scholars. The catalogue presents full analysis and interpretation of 88 Dutch and Flemish drawings, approximately ten per cent of those in the Uffizi. A checklist by Kloek, published in 1975, provides a guide to the complete northern holdings. Previous exhibitions of this material were held in 1947 and 1964 (with catalogue by Emil Karel Josef Reznicek). These northern drawings in the Uffizi do not provide a general survey, but offer a stunning display of draughtsmanship.

The division between north and south of the Alps was solidified by Vasari's formative and convenient method of organizing the history of art up to 1568, and then continued by Filippo Baldinucci, among others. Vasari's Italo-centric attitude became entrenched in the historiography of art, and only fairly recently have concerted efforts been made to correct this inherent bias toward northern art. Current research focuses firstly on the reciprocal admiration and appreciation of artists on one side of the Alps for those on the other, and, secondly, on the northern patronage for Italian artists, and Italian patronage of northern artists.

One measure of Tuscan recognition of northern art was the Uffizi's 2007 exhibition on Dürer's graphic art and his copyists, both Italian and northern. [1] When Dürer went to Venice to protest Marcantonio Raimondi's engraved copies after his own woodcuts, he gained only some satisfaction from the Venetians with an injunction against Marcantonio. However, he might have been less aggrieved had he known how revered his prints would come to be, by artists and collectors in Italy, in the following decades and centuries. This is evident in the Uffizi collection by several drawings that were likely considered as by Dürer when acquired by Cardinal Leopoldo de'Medici (1617-1675). In very general and limited terms, Dürer represented northern art around 1500 to the Italians.

Cardinal Leopoldo de'Medici formed the nucleus of paper art at the Uffizi; he assiduously collected this material, and had a network of agents looking out for his interests. One of these was Jan Philip Happart, Canon of the Cathedral of Antwerp, who purchased nearly all of Rubens' drawing collection in 1657, and sold ten sheets to Leopoldo (nos. 3, 8, 54). Upon Leopoldo's death, the drawings passed to Cosimo III, and eventually to the Gabinetto Disegni e Stampe degli Uffizi. Of Leopoldo's over 12,000 sheets, approximately 400 were by 70 Dutch and Flemish artists, according to the 1687 list compiled by Filippo Baldinucci (1624-1696). He served as curator for this collection which was kept at the Palazzo Pitti until 1704, when it was moved to the Uffizi. Leopoldo had acquired beautiful drawings by Gossaert, Pieter Bruegel, Denys Calvaert, Paul Brill, Rubens, Van Dyck, Matthias Stom, and Herman van Swanevelt. Not surprisingly, these artists had traveled to Italy, and some had worked there for extended periods. Artists working for the Medici are well represented in Leopoldo's acquisitions, especially Stradanus and Suttermans. The Uffizi's holdings have also benefited from several other donations, notably that of Emilio Santarelli, 1866.

Understandably, some of the Uffizi sheets went under various authors. The earliest drawing is of the Punishment of the Visigoth Queen Brunhilde, whose arms and legs are tied to four horses pulling in different directions (no. 1). Inscribed in an Italian 16th-century hand with the name of Dürer, it was unmistakably listed by Baldinucci as by "Hans Hemelinck," or Memling. It is now considered "artista fiammingo (o veneto?)" ca. 1510 - an indication of both the uncertainty and open-mindedness of the authors. Another drawing, acquired by Leopoldo, was listed as by Dürer until fairly recently; the beautiful landscape with houses and broken tree is now recognized as by Jan van Scorel (no. 7).

Rubens is present as former owner as well as artist. Of those three drawings here shown, which came through Canon Happart's hands, one is by a Leiden master of ca. 1500, it depicts the Crucifixion of Saint Andrew and is retouched by Rubens (no. 3). One sheet from Rubens' collection, of Elijah Fed by a Raven (no. 8), bears a false monogram of Dürer, and probably was acquired by Leopoldo as by that artist; it is now attributed to Pieter Cornelisz Kunst. How Leopoldo acquired these two, and Rubens' grand Assumption of the Virgin (no. 54) is interesting in itself. In Antwerp, 1659, Giovanni Battista Bolognetti acted as intermediary between Leopoldo and Happart. As an art dealer, Happart was keen to sell the Rubens drawings, offered Leopoldo nine sheets, and gifted the tenth. The first two on this list, the Assumption and the Supper at Emmaus (no. 54a), were evidently the most impressive, and also served as modelli for prints by Hans Witdoeck. Despite Leopoldo's interest in prints, his acquisition of these modelli seems unrelated to their function. One wonders why Leopoldo did not take advantage of this opportunity to purchase more of the Rubens cache.

Indeed, a number of drawings here, and in the larger Uffizi collection, are preparatory designs for prints. Some of these were acquired by Leopoldo, who may not have connected them to the published prints. Spranger's Hercules and Omphale (no. 28) apparently entered his collection as by Goltzius, and it was not correctly attributed until 1964. The composition of Stradanus' Christ Casting out the Merchants from the Temple (no. 35) was published by Philips Galle, but probably from another, similar drawing.

Although Leopoldo purchased etchings by Rembrandt, he seems to have had little interest, or luck, in owning drawings by the master and his associates. The Foot Operation (Touch), now attributed to Lievens, entered the collection under Leopoldo as by one Johannes Bacler, according to an inscription on the sheet which probably refers to The Hague collector Johannes C. de Backer, whose collection was sold in 1662 (no. 62). In one list of 1663, several drawings were listed as by "Rembrans d'Amsterdam" but are not even by artists close to him. One exceptional sheet, worthy of further study, is Jacob Pynas' Joseph thrown down the Well by his Brothers, a small, finished pen sketch (no. 61), which entered with the Santarelli collection.

The Uffizi Dutch and Flemish drawings provide not only excellent examples of their kind, but also insights into the history of collecting paper art and the historiography of attributions along the north-south divide. The catalogue, with introductory essays that trace the collection's formation and with full discussions of the exhibited drawings, including attributions and uses, is an essential and very welcome contribution to the field.