Petra ten-Doesschate Chu: The Most Arrogant Man in France 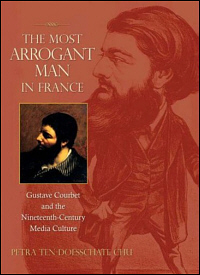 2007 has been a major year for Gustave Courbet with the major retrospective at the Grand Palais in Paris which will move on to the Metropolitan Museum in New York in March 2008. A substantial catalogue of current scholarship was published, as well as books by Segoléne LeMen and a collection of the writings of Linda Nochlin on Courbet.

Petra ten-Doesschate Chu takes an original approach to Courbet, raising issues and suggesting ideas not previously considered. In Chapter 1, she reviews the growing presence and importance of the press in 19th century France and with it, a greater concern with publicity and emphasis on monetary success. Courbet, like the press, is committed to "giving expression to the here and now." Chapters 2 and 3 further develop the idea of self-promotion and the creation of a public persona through numerous self-portraits as well as portraits of important artistic contemporaries, done, according to Chu, to indicate the company he kept. In Chapter 4, Chu analyzes the "rhetoric" of Courbet's major Salon paintings, emphasizing the role of irony and the place of allegory and metonymy. Chapter 5 concerns Courbet's paintings of women and the way they were addressed to a "bi-gendered" audience, displaying a kind of bisexuality, also seen in the writings of Balzac, Sand, and Flaubert. In the conclusion, Chu restates the idea of how Courbet structured and marketed his work in ways linked to that of the newspapers. She also discusses how his choice and presentation of landscape paintings were intended for maximum sales to a broad audience, done in a period of financial pressure. The Epilogue shows how Courbet's participation in the Commune, and his advocating the destruction of the Vendome Column, lead to his ultimate destruction.

The title of the book, The Most Arrogant Man in France: Gustave Courbet and the Nineteenth-Century Media Culture, is a clear indication of Chu's thesis. The first phrase "the most arrogant man," is Courbet's, the emphasis on media culture is particularly 20-21st century. Courbet may have played with the proliferating press to get maximum attention, but that does not sufficiently explain the content or style of his painting.

Chu does not discuss why certain subjects may have had a deep appeal for Courbet, the fleshy nudes, the deep caverns. She denigrates him as a publicity hound, an egomaniac, and, on the other hand, praises his autonomy and independence, which is somewhat undercut by her argument about his painting to sell. She quotes the sociologist Pierre Bourdieu who addresses the issue of the artist's new position that came about with the great changes in the relationship to the public, and a "dual effect of alienation and liberation." Chu notes that a tension exists between alternatives: on the one hand artistic autonomy, on the other, "submission to the dominant culture." (1)

Chu writes as if it was new and radical for an artist to consider his audience. Artists have always done so in some degree, whether to a pope, a king, a Salon committee. She seems ambivalent whether Courbet is selling out in considering his clientele or a hero for going directly to the viewers and not courting the government, the official institutions, the salon etc. The new artist-producer, Chu points out, was reliant on exposure, "a necessary element in gaining artistic freedom and autonomy." (9) Courbet "grasped the cultural implications of the contemporary media expansion" which, at least partially, explains his outrageousness. (12)

Courbet, in an unusual manœeuvre for the time, chose to publish in the newspaper his condemnation of "historical art" and to call for an art that concerns itself with the reality of the artist's own place and time. By doing so he could reach the widest readership in his assault on accepted views of art. This leads Chu to argue for the "primacy of the verbal over the visual, of text over image," which "marked his cognition of modern life. His own painting was conceptual rather than perceptual." (16) I find this assertion arguable. Courbet's painting was particularly material with its thick impasto, realist in the very means of painting, and visceral rather than conceptual. That Courbet wrote a Realist Manifesto does not mean he was primarily verbal rather than visual, because he painted an "Allegory of the last 7 years in his studio" and a few other works with ambiguous references does not make him conceptual. His ideas are rather blunt and should be placed in the context of the emergence of Realism, in which Courbet played the key role.

Chu writes "I intend to argue, thinking of Courbet's paintings in terms of language and rhetoric is a fruitful way to approach his œuvre." (16) She discusses Courbet's use of rhetorical means such as irony, metonymy and allegory, especially in his major Salon paintings of the 1850s. This allowed Courbet to "preserve his artistic sovereignty without being erased or marginalized." By using such "strategies," Courbet could make "controversial visual statements in indirect and ambiguous ways." (78)

There have been many interpretations of Courbet's most complex and ambitious painting, The Painter's Studio: Real Allegory Summing up a Seven-Year Phase of My artistic Life, most notably those of Linda Nochlin, Werner Hoffmann, Klaus Herding, and in the recent publications mentioned above. Chu quotes Nochlin that the painting is "an allegory of the unfinished, of the impossibility of ever finishing in the sense of imposing a single coherent meaning on a work of art." (105) Chu offers a novel sociopolitical reading with its "secondary" meaning related to Courbet's complex relationship to the imperial government of Napoleon III. She points out that both Courbet and the Emperor shared the status of being "successful parvenu" in Paris. Both emerged from obscurity in 1848, the Emperor by winning the election, and Courbet by winning a Salon medal early in 1849. When Louis Napoleon held an International Exhibition seven years into his reign, Courbet, despite urgings, refused to participate in it and rather countered with an exhibition of his own, because he considered himself "a government." It was on this occasion that he wrote "I am the proudest and most arrogant man in France." (106) Chu argues that as Napoleon wanted the world to come to Paris, Courbet wanted them to come to his studio. In The Painter's Studio, Courbet "recast himself in the role of emperor, the model as Eugenie, the little boy as the prince impériale, his friends as the emperor's courtiers, and his eccentric models - Irishman, Jew, and "red-tail" - as the exotic foreign dignitaries that had flocked to France." (107) I am not convinced.

Many of Courbet's other works, Chu argues, were the "production of commodities." She cites Courbet's letter to Théophile Gautier "if I am making art, or rather, if I am attempting to make it, it is first of all to make a living from it." (13) There is something in the very flesh, painting, the facture, the impasto, the stuff of painting, its very material and materialty which is at the heart of his work. To reduce Courbet's painting to "the production of commodities" (13 ) is overstated and over determined, a fashionable adoption of Marxism, without citing of Marx. She points out that financial pressures lead Courbet to have to produce many landscapes for sale and that he read his market well.

Chu discusses the increasing role of women as an active part of the viewing, reading and collecting public. Courbet sought to appeal to both sexes in his choice of subject matter. To discuss this desire to reach a "bi-gendered" public, Chu adopts Naomi Schor's phrase "Bisexuality," a rather awkward term to indicate the appeal both to the feminine and masculine. Chu's surmise that Parisian women may have responded positively to Courbet's hefty nudes because they allowed them by contrast to feel positive about their own slender fashionable bodies is a stretch.

Despite my criticisms, this is an interesting and lively book that presents new arguments about the changing role of the artist in an age of emerging media, a subject particularly relevant today. The book is richly illustrated with not only the paintings but caricatures and popular prints. It is a worthwhile contribution to the literature on Courbet in its shift of emphasis in the artist's work and its novel interpretations.