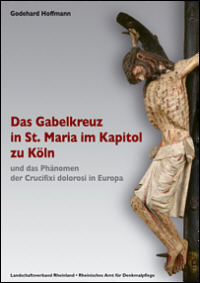 As anyone who has stood before the large wooden Gabelkreuz in the erstwhile Benedictine convent church of St. Maria im Kapitol in Cologne can attest, this sculpture, with its rich and shifting interplay of curving arcs and jagged angles, concave and convex volumes, linear surfaces and protruding forms, is one of the most artistically spectacular plastic works of the European Middle Ages. It is also, paradoxically, one of the most difficult to look at in a sustained way, for its unrivalled artistry has been put to the service of making visible the most atrocious bodily duress. From the bashed and swollen eye-sockets to the cramped and broken toes, the figure "delivered to its [original] audience a sobering test of their capacity for horror" [1] - and continues to do so today.

Godehard Hoffmann and his colleagues thus deserve great admiration and gratitude for creating this volume on the Cologne crucifix and its relatives in the Rhineland and beyond - a volume whose material sumptuousness (with 222 mostly color photographs on thick, glossy pages) does full justice to the scholarly analyses within. The texts - Hoffmann's thoroughgoing discussion of not only the Kapitol example but also "the phenomenon of Crucifixi dolorosa in Europe," along with technical reports on several recently restored examples in Germany - offer specialist readers an unparalleled wealth of information. Rigorous in its presentation of the material, balanced in its treatment of the earlier literature, and refreshingly readable despite its technical focus, this book supersedes anything yet written on this quintessentially late medieval genre of art, and will form the essential starting-point for anyone wishing to pursue the topic along more interpretative and contextual lines.

Hoffmann opens with a brief and somewhat perfunctory overview of "history and art around 1300" before moving to a historiographical survey of the crucifixes, noting that both the social anxieties arising from warfare and natural disasters and the extreme religious fervor that characterized fourteenth-century culture have traditionally loomed large in scholarly interpretations of the sculptures. Although the notion that they are responses to the horrors of the Plague (a view reflected in the misnomer Pestkreuz) has been long debunked, modern perceptions have until very recently been shaped by no less misleading anachronisms - specifically, the nineteenth-century overpainting of the Cologne figure and others with dusky brown washes that affirmed romantic views of the gloomy aspects of late medieval mysticism.

One of Hoffmann's missions is to dispel such myths. Quite literally, through his and his colleagues' restoration work, he has now revealed what the makers of the Cologne crucifix wanted people to see. Most spectacular is the medieval polychromy, which has emerged in two layers. What remains visible now is a second coat of paint added in the late Middle Ages (probably in the fifteenth century), which, in keeping with the period's obsession with blood, features a stomach-churning array of that substance's manifestations: blood drizzles from holes and raised welts scattered across the body's white surfaces, it gushes from the side-wound in great gesso globs, it speckles the loincloth in thin smears and races down the veins of the skeletal, jutting legs. Much to their surprise, the restorers discovered an earlier (original) layer of paint beneath this, which has been left partially visible on the torso; here, blood trickles in three wavy rivulets from each black wound, while tiny red dots fill the intervening surfaces, giving these a more densely packed and ornamental appearance.

Although, in his close comparisons of these painting styles with the polychromy on other crucifixes, Hoffmann takes some note of the differing effects of the various depictions of wounded flesh, his highly scientific descriptions tend to neutralize the grimness of what Blutmalerei (as he calls it) actually represents. Readers of a cultural- or religious-historical bent may find the author's technical discussion of "blood-painting" somewhat jarring in its reification of signs of pain. Nonetheless, Hoffmann deserves our gratitude for undertaking the unpleasant task of differentiating and articulating the manners in which blood can be pictured running out of raised welts or flat punctures - an issue that was clearly of central importance to late medieval artists and their patrons but that more squeamish modern interpreters have long preferred to ignore.

The unflinching close-up photographs of the Kapitol figure's ravaged body parts force us to confront the representational aspects that, to judge from this sculpture's progeny, contemporaries found most powerful: the flesh skimming over the broken nose in three loose folds, the palms of the hands shredded into thick vertical gashes, the feet flexing under the tendon-crushing force of a single nail, the ballooning ribcage that canopies the emaciated belly. These gory details mask an assembly process of extraordinary refinement - a process that the artists evidently did not want beholders to notice but that is explained with admirable lucidity by the restorer Hans-Wilhelm Schwanz. A series of diagrams and X-ray photographs show how both arms, portions of the legs, the head, and the Crown of Thorns were attached separately to the corpus with wooden plugs and iron nails; the face and hair, with their intricate juxtapositions of protruding and receding details, were likewise assembled of small parts seamlessly locked together. In the case of the Crown, thorns not only project outward but also penetrate invisibly into the figure's head. Even in its concealed parts, then, the sculpted corpus emerges as a material simulacrum of the body of Christ evoked in so many contemporary Passion texts, a body whose surface, made ugly through unthinkable abuses, shelters a heart filled with redemptive love.

The Kapitol crucifix may not contain a heart, but it is filled with holy objects: within an open cavity in the figure's chest lie fragments of saints' bodies and sacred ground, wrapped in pink silks and labeled with parchment authentica. The presence of relics within the torso had been known for centuries - a 1636 document notes that they were deposited there on the occasion of the crucifix's consecration on December 4, 1304 - but only in the course of Hoffmann's investigations was their presence in the chest discovered. Endoscopic photographs, taken by instruments inserted into the side wound, make the little relic-packets visible for the first time since their original deposition.

Whereas Hoffmann calls into question the traditionally assigned date of 1304 as a firm terminus ante quem for the Kapitol crucifix, he does conclude that in both geographical regions where this type flourished - the Rhineland, Westphalia and southwest Lower Saxony on the one hand, and Italy on the other - all the major examples arose during the first two decades of the fourteenth century, a period in which, paradoxically, the intensified desire of the pious to visualize Christ's torments at the Passion ran up against the decline in quality of large-scale stone sculpture. Against this background, delineated in the book's final chapter, individual Wanderkünstler came to the fore; these were skilled artist-technicians who specialized in the carving and assembly of various kinds of local woods, fashioning crucifixes on site for a variety of institutional patrons. In contrast to many of his forerunners and peers, Hoffmann resists the temptation to assign primacy to any one nationality in originating the type, though he does posit the maker of the Kapitol crucifix as a unique personality whose hand is not perceptible in works made either before or after. This artist may have come from Italy, the Rhineland, or elsewhere; what is clear, judging from the lack of earlier or contemporary parallels in the area, is that he did not stem from Cologne. Hoffmann remains open to the possibility of a now-lost Urbild from which sculptors in various regions of Europe learned; this would explain the emergence of similar crucifixes in areas as disparate as Spain, Italy, the Czech Republic and Denmark. Be that as it may, the surviving works analyzed by Hoffmann makes clear that the Kapitol crucifix was directly and enormously influential in its own day - a fact that suggests the accessibility of this work to viewers outside the closed community of nuns who owned it.

Specialists may quibble with some of Hoffmann's new dates or his refusal to define the Kapitol master's national identity - but, like the crucifix itself, his and his team's accomplishment stands as far more than the sum of its parts. Their revelation of the long-hidden but central aspects of one masterwork of Western sculpture, and their introduction of many related works that have hitherto had little place in the art historical canon, has opened the doors wide for future generations of scholars who wish to understand better the nature of late medieval Passion piety and artistry alike.

[1] Mitchell B. Merback: The Thief, the Cross and the Wheel: Pain and the Spectacle of Punishment in Medieval and Renaissance Europe, Chicago 1999, 15.