Silke Trzcionka: Magic and the Supernatural in Fourth-Century Syria 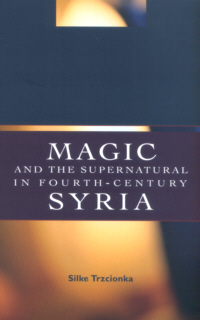 Silke Trzcionka, an Australian Research Council Senior Research Associate at the Centre for Early Christian Studies of the Australian Catholic University, has produced a well-thought, critical presentation of magic and its related activities as part of the turbulent lives of Christians and pagans in Syria and Palestine of the fourth century AD. In this book the author has shaped her doctoral dissertation into a clearly presented and thoroughly discussed case study that illustrates the ideology and practise of magic during an historical era marked by the rule of Christianized Roman rulers under whose wings the Christian Church rapidly spread in the Eastern Mediterranean.

In Chapter 1 the author describes the aims and scope of her book and offers a brief outline of what will be discussed in the main chapters. Among other points, the author justifies her choice of Syria and Palestine during the fourth century AD as the focus of her study by presenting it as the result of an ongoing need for "... more temporally and regionally focused studies of the material, especially as the social context becomes increasingly acknowledged and examined" (2). Hence, the author, from the very beginning of her study, puts a justified stress on the role of the social context in the examination and the interpretation of ancient historical and cultural material, a stress the author preserves throughout the main analysis of her study.

In Chapter 2 the author introduces magic and the supernatural as a subject of scholarly theoretical discussions, emphasizing the responsibility of the student of such ancient material for avoiding modern preconceptions and prejudices against the nature and use of magic and for understanding the way the ancients viewed magic and applied its notion in their everyday life. Thus, the author observes, "... acceptance of the belief in the practices and powers of the supernatural, combined with a dismissal of the credibility of that belief, is avoided in this study. In contrast, an acknowledgement is made that their practices involving the supernatural could possess both meaning and efficacy in their antique context" (10). In the same chapter the author offers a wide definition of her subject matter to replace the misleading, monolithic label 'magic' (10).

As a loyal follower of contextual analysis, the author moves on in Chapter 3 sketching out the historical and cultural profiles of fourth-century Syria and Palestine, which serve as the wide context of the material investigated. In the course of her description of the society in fourth-century Syria and Palestine the author touches briefly upon the administration of the Roman government; economic activities and sources of wealth; ethnic diversity and interaction between the Mesopotamian, the Jewish and the Greek cultures; the religious policies of the Christianised rulers; the advance of Christianity and the increasing power of the Church; and monasticism and asceticism.

In the next chapter the author begins her analysis of the material, starting off with the examination of magical activities and supernatural beliefs revolving around the towns' hippodromes, which were not only places in which the popular horse races were hosted but also centres for socio-political interaction among the townsfolk. Within this chapter the author discusses a number of examples illustrating the important role magical activities played on the stage of fierce competition not only between the horse racers or their supporters but also between paganism and Christianity. The material presented in this chapter is followed by a discussion of the motivations behind magical activities in the hippodrome, touching once again upon the social context of these activities.

The method of clearly distinguishing between the presentation of the material and the discussion of its nature and its context is followed by the author in the next five chapters (i.e. Chapter 5 to Chapter 9), each of which focuses on a sub-topic of the matter of magic and the supernatural. Specifically, in Chapter 5 the author discusses examples of curses and invocations ensuring success in various aspects of everyday life, in addition to 'sorcery' accusations, most of which were made to harm a personal enemy or the status of a prominent individual. In the case of magic employed for ensuring success, the author mentions an interesting fragment from the Codex Theodosianus in which permission is given to farmers to use benevolent magic in their work, marking the distance between the value of magic during that period and modern conceptions (see 55-56).

In Chapter 6 the author discusses the popular use of love charms, examples of which were also associated with the activity and skills of Christian monks and holy men praised in the hagiographical sources (as, for instance, with the skills of Aphrahat, 81-82). In the course of the discussion of such magical activities, the author stresses the important role gender and public opinion played in the use of magic as a tool for invoking love ad desire among individuals.

In Chapters 7 and 8 the discussion turns to apotropaic devices and magical healing practices. These types of usage of magic were very popular in both the Christian and the pagan communities of fourth-century Syria and Palestine. In the case of magic used as a tool for healing, the author raises an interesting question about the relationship between magic and medicine in that historical context. Given that in all examples brought forth it is evident that magical activities were not considered to belong to the same category as medical practices (although they were sometimes combined as shown in the example from Libanius, 126), it would be interesting if one compared this with the uses of magic and medicine in earlier societies that were not yet exposed to, and influenced by, classical theory and science. Thus, for instance, in Ancient Egypt magical ideas were embedded in most medical remedies, weaving together a mixed picture of healing practices [1]. Such a mixture of magical practices with medicine can also be found in popular remedies circulating in the Middle Ages [2].

In Chapter 9 the author presents the last type of evidence for magical activities: accounts of demonic possession and expulsion. The sources discussed here are all hagiographical, describing Christian holy men communicating with demons and exorcising believers. In the discussion following the presentation of the evidence the author analyses the nature and motives of demonic possession in the light of psychological and sociological theories. Hence, for instance, the author promotes the interesting idea that the holy man who expels a demon functions as a judge and an executioner, while expulsion is metaphorically seen as a law court (158).

Finally, in Chapter 10 the author presents her conclusions on the status of magic and the supernatural in fourth-century Syria and Palestine. Among other points, the author observes that no apparent differences between the two bodies of material examined can be detected (161) and that the supernatural was evidently an integral part of late antique world-view (162).

The main body of Silke Trzcionka's work is followed by extensive endnotes, a bibliography of primary and secondary sources, and a brief subject index. In my opinion, either in this part of the book or within the text the author should have inserted a selection of illustrations that would have aided the reader to digest more easily, for example, observations about artefacts with magical symbols, such as those discussed on pages 102-106.

In general, this is an important scholarly book that discusses fascinating late antique folkloric and religious traditions in a confident and well-thought manner that could serve as an exemplary model for all students and scholars of ancient culture. Silke Trzcionka's book will greatly contribute not only to the study of magic and religion in ancient societies but also to our wider understanding of the ancient mind.

[2] See R. Kieckhefer, Magic in the Middle Ages, 2nd edition, Cambridge 2000, 65. The same book could offer some interesting comparisons with ideas and practices circulating in the Middle Ages, supporting those made briefly by the author on pages 15 and 63.