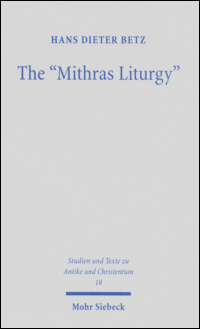 Hanz Dieter Betz, Professor Emeritus of New Testament in the University of Chicago Divinity School, known for his expertise in the religion of the Graeco-Roman world, and especially for his interest in its syncretistic manifestations, has offered the wide audience of scholars of the Bible and of the Hellenistic and Roman Orient and its religions this remarkable re-examination of one of the most famous religio-magical texts, whose origins and purpose are a mixture of Gnostic ritual, Egyptian magic, and Iranian theology. And I say "re-examination", because the text of the "Mithras Liturgy" has been edited, analyzed, and considered before by a number of scholars, such as Franz Cumont, to whom the study of Mithraism owns its main fundamental theories, Karl Preisendanz, who first edited the text of the magical papyrus of Paris National Library (Suppl. grec 574), and Albrecht Dieterich, who baptized this text: "Mithras Liturgy", and offered its first complete edition, text commentary, and translation into German. [1] Betz expresses in every opportunity his admiration for Dieterich's work, reminding the reader that most of the credits for the reading and interpretation of this text go to Dieterich.

In this book Betz presents an edited version of the Greek text dated to the 4th century AD (39-49), in which he presents not only the amendations proposed by Preisendanz, but also his own readings (cf. note on page 39). The text is divided into small sections, most of which bear a different formal and semantic character. Thus, the text begins with a prayer, followed by the main body of the ritual called immortalization, which in its turn contains a variety of types of religious expression, such as voces magicae, petitions, invocations, didactic explanations, and so on. One of the most important parts of this ritual is the so-called ascension narrative, which describes in rich imagery seven stages of mystical initiation. The last section of the "Mithras Liturgy" contains supplemental rituals that end with a concluding statement of the ancient writer.

The Greek text is followed by an English translation (50-59), which slightly revises that made by Marvin Meyer and presented in Betz' "The Greek Magical Papyri in Translation, Including the Demotic Spells" (Chicago 1986). This is succeeded by an original literary analysis (60-87) that sketches out the complex structure of the text based upon the contents and purpose of each part.

The most significant contribution made by Betz to the reading and interpretation of this difficult text is, however, made with the other two main sections of his book: namely, with the introduction (1-38) and with the long commentary following the text (88-226). The introduction is divided into five sub-sections in which he presents and discusses the importance of the text (section I), the history of the discovery and scholarly readings of the papyrus on which it has survived (section II), the life and work of Albrecht Dieterich, recognizing him as the patron-scholar of this text (section III), the genre and form of the text (section IV), and the religio-historical context of its composition and its assumed uses (section V). Of these, in the discussion developed in the last two sections Betz raises a number of issues, which can be of great interest for the student of the language, form, and purpose of texts similar to the "Mithras Liturgy". For instance, Betz addresses the long-debated issue related to the insertion of the parts of the liturgy in between a number of Homeric verses, stressing the fact that this was done by the copyist either by mistake or for some undetectable reason (27). Another interesting point that Betz makes is the fact first that the text definitely shows signs of redaction (31-32 and 112) and second that none of the existent titles of the sections could serve as a title of the whole (28), due most probably to the absence of any thematic coherence between the various identified sections of the text. Finally, in the last section of the introduction Betz, while discussing the context in which the nature and purpose of such a text could fit, underlines the fact that the ideas discussed in this text are not strictly part of the cult of Mithras, which was known and followed in many lands living under the sceptre of the Roman emperors, but they are rather syncretistic in character, bearing an Egyptian ideological backbone that would suggest that the author of this text could have been an Egyptian learned priest/magician (32-35). [2]

While in the introduction of his book Betz addresses the main questions about the general nature of the "Mithras Liturgy" and its relationship to the milieu of Hellenistic and Roman cults, in the commentary he focuses on the main themes of each section of the text, drawing parallels to other ancient religious or literary works, and offering his interpretation of parts of the text in which obscure references to religious ideas are made. An example of his suggested parallels is found in the very beginning of the commentary where he compares the so-called exordium of the text to the preface of the Apocryphon of James found in the famous archive of the Nag Hammadi (88). With such comparisons Betz is able to set the text in its right Graeco-Roman context and connect it to other writings of similar religious traditions, as of Gnosticism in this case. An instance of his original attempts at interpretating parts of the text is that which is related to the metaphors employed in the so-called Prescription of the breathing ritual, which Betz proposes that refer to religious ideas known to both Greek philosophers and Egyptian priests (130-132). Betz ends his well-structured commentary with an innovative suggestion for separating the last two lines from the rest of the text, which he takes as being the epilogue of the liturgy, in which the author / redactor strangely calls the text a memorandum. In this way Betz leaves out the last Homeric verses as not being an integral part of the "Mithras Liturgy".

Finally, the commentary is followed by small-scaled pictures of the papyrus pages of the "Mithras Liturgy" (228-243), a bibliography (245-255), and a useful index containing a list of the Greek words mentioned in the text (256-274).

Overall, I would like to emphasize the importance this new study of the "Mithras Liturgy" has for a number of branches of Ancient Religion and Ancient Philology and to congratulate Professor Betz for offering us such a handy and well-thought presentation of this intriguing product of ancient religious syncretism.

[2] Compare the discussion of the Egyptian authorship of the "Mithras Liturgy" to what Jacco Dieleman has to say about the Egyptian and Greek magic spells in his recent book: Priests, Tongues, and Rites. The London-Leiden Magical Manuscripts and Translation in Egyptian Ritual (100-300 CE), Leiden / Boston 2005.