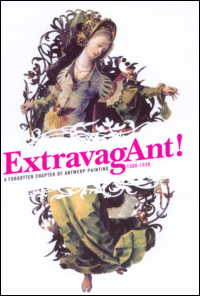 While this catalogue's title reflects the ornate beauty of the artworks on which it focuses, it does not convey its magnitude as a contribution to the history of Netherlandish art. The exhibition, ExtravagAnt!, provided an occasion for substantial research by leading experts on the productions of several workshops in and around Antwerp in the first third of the sixteenth century, chiefly panel paintings, but also designs for stained glass, textiles and other arts. All evidence points to a prodigious output during the decades in which Antwerp became the trading capital of Europe. Over 200 compound altarpieces alone survived the period of iconoclasm and exist today (7).

Scholarly interest in the paintings surfaced with Hulin de Loo's monumental exhibition of Flemish Art (Bruges, 1902), in which several examples were loosely grouped around Herri met de Bles, on the basis of the inscription "Henricus Blesius" on the back of a panel in Munich (no. 17 in the present catalogue). An awareness of the artists as an independent group emerged in the writings of Max J. Friedländer, who argued that the so-called "Bles-Bilder" stemmed from a cluster of unknown painters, varying not only in skill but also in their relative degrees of naturalism and mannered artifice. [1] In an article of 1915 and later in his monumental series, Die altniederländische Malerei, vol. 11, Friedländer identified five groups of paintings, centered on works by masters given auxiliary names ("Notnamen"). [2] Together, these groups constituted two generations of "Antwerp Mannerists".

Coming decades before the first serious studies of Mannerism in Italian Art, Friedländer gave that designation to a phase of Netherlandish art situated between the late Gothic and the first works inspired by the Italian Renaissance (as discussed by Born, 11, 14). His coinage of the terms "Manier" and "Manierist" reflected both his wonder at unusual motifs within the paintings and pejorative assumptions about the place they occupied in relation to the works of Pieter Coecke, Quentin Metsys and other contemporaries. In addition, lacking knowledge of the collaborative workshops in which these altarpieces were produced (Van den Brink, 7, and Born, 17), Friedländer could only interpret them within a conceptual framework that privileged originality - a standpoint more reflective of his own time than of theirs. Even so, his connoisseurship laid the foundations for further scholarship.

As the first opportunity to thoroughly revisit this material, the catalogue, ExtravagAnt!, pays tribute to Friedländer's early work. Even though the groupings of works have shifted, their classification via "Notnamen" survives. Friedländer's contributions are discussed in Peter van den Brink's introduction and in an essay by Annick Born, which combines a historiographic survey with an overview of the material in its stylistic, regional, artisanal and thematic aspects. The ninety-three catalogue entries, which highlight the knowledge of several scholars, provide windows onto numerous topics, from new understandings of the workshops and the collaborations between painters, to connections with the production of tapestries, stained glass, metalwork and other arts, and the local and regional background of certain subject matter. Among the many contributors, Dan Ewing, author of a doctoral thesis on Jan de Beer (to date the best defined artistic personality), wrote the entries on de Beer as well as on such related figures as the Master of Amiens, Pseudo Bles, and the Master of the Errera Sketchbook. Stephen Goddard provided expertise on the Master of Frankfurt; Annick Born, on the Master of 1518; and Godehard Hoffmann on the newly identified painter Adriaen van Overbeke (formerly Friedländer's "Master of the Antwerp Crucifixion"). Lars Hendrikman wrote entries for several earlier paintings in the first section of the catalogue, and Micha Leeflang added insights on collaborative practices, drawn from IRR mosaics of underdrawings.

Noteworthy preparatory work, undertaken by Peter van den Brink, involved the identification over a sixteen-month period of some 350 drawings by the Antwerp Mannerists and their immediate contemporaries. Fifty-one Antwerp Mannerist drawings and nine by Gossaert appear as catalogue entries and comparative examples, written about by Van den Brink, Ewing, and Ellen Konowitz. Some sheets in pen on colored grounds are signed collectors' drawings, calling to mind comparisons with Altdorfer and Dürer. Others of similarly exquisite finish were preparatory to paintings, metalwork and other arts. While there was widespread involvement with stained glass design, Van den Brink observes that the drawn roundels generally assumed to be stained glass drawings were often vidimus designs for varied purposes (112). The broader insights on types, media and functions of drawings presented in these entries and in Van den Brink's essay for the companion volume will be invaluable for future drawings research.

Any evaluation of this project needs to consider the set of essays, initially planned as the catalogue's second volume but published as the 2004/05 issue of the Jaarboek van het Koninklijke Museum voor Schone Kunsten. These studies provide needed contextualizations of the artistic material, not only from the historiographic standpoint (Born, Borchert), but also from the perspective of the art market and the artistic community (Maartens, Ewing). As a city that drew artists from Brussels for civic projects into the 1490's, Antwerp saw rapid growth across the next thirty years in its artists' guild and its art market, which like other areas of commerce was set up for international trade. An unusual essay by Yao-Fen You relates the paintings' displays of couleurs changeantes, regarded as a marker of their mannerist style, to techniques of textile weaving and dyeing, major export industries of the region.

A sticking point for both authors and readers lies in the term, "Antwerp Mannerists", which has shown surprising durability, given that not all of the artists worked in Antwerp (at least two, who were real stylistic innovators, are considered French), and given the appellation of "Mannerists" to such an early generation of northern artists. The authors justify the focus on Antwerp through evidence that all of the artists trained there and moved upward through its guild system. The final essay in the Jaarboek, by Paul Vandenbroeck, presents a case for considering this group a manifestation of a "Late Gothic Mannerism" that extended from the Northern Netherlands (e.g., Cornelis Engelbrechtsz., Lucas van Leyden) through the Alps and as far as Portugal and Northern Italy. He identifies parallels in literature and rhetorical theory, music, the decorative arts, architecture, and the "microarchitecture" of choir screens and sculpted shrines.