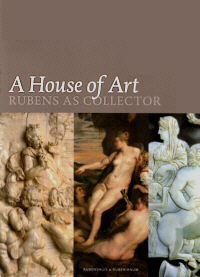 This publication is the catalogue of an exhibition held at the Rubenshuis, Antwerp, in the Spring of 2004. It consists of a long introductory essay by Jeffrey M. Muller and extensive entries on the 91 exhibited objects written principally by Kristin Lohse Belkin and Fiona Healy, who also acted as guest curators. The starting point for the exhibition was the so-called Specification of 1640, essentially a sale catalogue drawn up in Dutch, but surviving only in an English manuscript translation and a single copy of a French printed version which was distributed to potential buyers. The problem with the Specification as a record of ownership is that it describes only part of Rubens's huge collection, gives no acquisition information, and fails to clarify how Rubens dispersed and displayed the works of art among the rooms of his Italianate house on the Wapper. Some of these shortcomings are partially remedied by other sources - letters, sale records, visitor accounts - but much remains a matter of conjecture. The descriptions in the Specification are also laconic. Consequently, it is only possible to identify, with varying degrees of certainty, slightly more than a third of the 324 listed paintings, either in the original or in versions or copies that record the original composition. The curators readily admit that "the exhibition presents an image of the nature and diversity of the collection as a whole rather than an exact reproduction of it" (8). To take but one example of the complications involved in reconstructing Rubens's collection, number 28 in the catalogue is a painted representation of Jupiter and Antiope by his most accomplished pupil Anthony van Dyck. However, the exhibited painting, from the Wallraf-Richartz-Museum in Cologne, is just one of eight representations of the subject which are given to Van Dyck and his imitators and none of which can be clearly pinpointed as having belonged to Rubens. Such problems of identification, together with restrictions in borrowing Rubens's intimate portraits of his family and late landscapes, many of which are on panel and of large dimensions, have imposed limitations on the content of the exhibition.

In his wide-ranging essay, Muller deals with Rubens's taste, his motivations for collecting, and issues of display, in the context of learned and cultural circles in 17th-century Antwerp and the artist's own artistic evolution. The author is of course eminently well qualified to engage with these areas; his Rubens: The Artist as Collector (Princeton University Press, 1989) was the first study to analyse fully the surviving documentation with regard to Rubens's collection and its formation, and included the still definitive critical commentary on the Specification. Rubens was highly selective in his acquisition of pictures, sculptures and gems. His guiding principle was exemplary quality and he believed that this ideal of perfection existed primarily in the products of ancient Greece and Rome and the Italians of the 16th century. As a result, his collection was not universal in nature; apart from a quantity of shells, he did not possess the type of naturalia which was commonplace in cabinets of curiosity of his day. This is one of the features that distinguishes Rubens's collection from that of his counterpart in the Northern Netherlands, Rembrandt, who tried to be more inclusive in his approach, albeit on a smaller scale. Neither is there evidence that Rubens bought or collected scientific instruments. Instead he relied on a library of illustrated volumes of natural history to satisfy his interest in these matters, while his garden was planted with as many species of tree as possible.

Pride of place in his picture collection was given to the Venetians Tintoretto, Veronese, and especially Titian, by whom Rubens owned no less than eleven works. Conversely, it was the leading masters of the 16th-century Florentine-Roman tradition (Leonardo, Michelangelo, and Raphael and his followers) who formed the greater part of Rubens's collection of drawings. Titian was also central to Rubens's full-scale copies of pictures by other artists that formed an integral part of his collection; 35 copies after Titian are listed. While Rubens owned works attributed to 15th and 16th century Northern artists such as Jan van Eyck, Lucas van Leyden and Pieter Brueghel the Elder, and was happy to acquire genre scenes, landscapes and still lifes by contemporary Flemish and Dutch painters, he was less inclined to collect history paintings by the generation of his teacher Otto van Veen and even by his own contemporaries - a prejudice that surprisingly extended to early 17th-century Italian artists such as Annibale Carracci. He was, however, prepared to advance his patronage to his pupils, particularly Anthony van Dyck, although inexplicably Rubens's interest in the latter's work declined after his return from Italy in 1627-28. At the heart of his collection were Rubens's own paintings. In a letter to Sir Dudley Carleton, the English ambassador to The Hague, Rubens famously wrote about receiving enjoyment from the possession of his own works and even admitting that he had repurchased at a loss some of his own pictures that had a particular resonance for him. However, here a problem arises. How clear-cut is the distinction between paintings by Rubens which were part of his "collection" and works offered for sale which belonged to his stock-in-trade?

We are less well informed about Rubens's collection of antiquities. He acquired at least one ancient artefact during his stay in Italy - a marble bust that was wrongly believed to represent the stoic philosopher Seneca (number 65) - and purchased in 1618 about a hundred varied examples of Graeco-Roman sculpture from Sir Dudley Carleton. In addition, he amassed a considerable holding of ancient cameos and intaglios, an interest that brought him into close contact with the French antiquarian and collector Nicolaes-Claude de Peiresc, who became a friend and correspondent. While Peiresc valued coins for their historical importance, Rubens seems to have been less interested in this branch of collecting, preferring the aesthetic characteristics of his finely crafted gems.

What inspired Rubens to form a collection in Antwerp that rivalled the scale and content of those of monarchs? As Muller details, Rubens's educational and cultural background encouraged him in centralising the accomplishments of ancient Greece and Rome and also in privileging Italianate art and architecture. He was also motivated by religious conviction. The ideal of perfection and harmony that he sought in works of art was a reflection of God's role in creation. Furthermore, Rubens was stimulated by his contact with connoisseurs and collectors in Antwerp, who uniquely formed a separate grouping in the local painters' guild, and who collected for reasons of pleasure, honour and investment. Behind Rubens's acquisitiveness, there was a hard-nosed realism. This is seen in his readiness in 1628 to dispose of a large number of sculptures, gems and paintings to the Duke of Buckingham for enormous profit and also to further diplomatic efforts with the English crown. His practical inclination is also obvious in the extent to which his collecting activities informed his art. Drawings made in Rome of the best classical statues remained a source of emulation throughout his career, while his originals and copies of Titian led to a transformation in Rubens's painting technique during the last decade of his activity.

Rubens's magnificent house and garden provided an appropriate stage for his collection. However, there is still a lot of uncertainty about the original layout and decoration of his residence, which was largely demolished and reconstructed in the early 20th century. Most is known about the semi-circular sculpture gallery - Ruben's so-called "Pantheon" - illuminated by an oculus in the half-dome above, where busts and figures of Roman gods, emperors and other worthies were displayed in symmetrically arranged niches. As Muller points out, with this system of display, Rubens invented a new kind of museum space. Many of Rubens's most prized pictures were displayed in the adjoining "kunstkamer", but there is no precise record of its appearance. Another, more private space, was the "cantoor", probably a room (or rooms) intended for quiet study, where he kept the drawings, prints, oil sketches, and casts essential for his workshop production.

The catalogue is divided into three sections: paintings and sculptures (arranged according to the order of the Specification); antiquities; drawings after the antique; and Rubens's collection of drawings. Each section is preceded by a short but informative introduction. The lengthy entries authored by Lohse Belkin and Healy are exhaustive in nature, fully referenced and provide a great deal of new information. Some of the entries constitute miniature essays in themselves. The drawings component of the catalogue is perhaps the least satisfying. Only six drawings collected by Rubens were exhibited and none of Rubens's original drawings after the Antique, although six contemporary copies of the latter by Willem Panneels were included. Complications in identifying more of the drawings by other artists that Rubens owned, as well as the demands of other exhibitions taking place in 2004-05 and more focussed on the role of drawing in Rubens's output, prevented additional drawings being included in the exhibition. There are also difficulties in determining whether drawings by other artists that were retouched by Rubens, together with his own drawings after classical sculpture, should be considered as workshop material or part of his collection. Indeed, it is arguable whether Rubens would have made a distinction between the two types of drawings.

This catalogue is an important contribution to the burgeoning literature on Rubens. While there will always be controversy with making identifications from the Specification and other sources, this was the first real attempt to put on public display a representative and generally certifiable selection from the collection of one of the greatest artistic figures from the early modern period. The organisers and curators are to be congratulated in this endeavour.