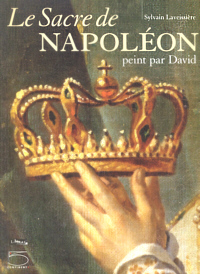 Sylvain Laveissière's richly illustrated catalogue was published to accompany the exhibition at the Louvre of David's Coronation of Napoleon and Josephine which took place from October, 2004 to January, 2005 to commemorate the bicentennial of the Coronation on December 2, 1804. In addition to the monumental painting, the exhibition included drawings, sketches and prints related to the project, robes and ornaments worn by Napoleon that were created for the ceremony as well as the crown, scepter and other objects fabricated for the event. One of the catalogue's objectives which was admirably fulfilled was to present to the viewing public a cogent historical overview of the painting and to provide a means of identifying the vast number of portraits of the family members of the new Emperor and Empress, their court, entourage, and invited guests, including the Pope who was summoned by Napoleon to give his official blessing to the ceremony and the artist David himself whose self-portrait can be seen in one of the tribunes.

Laveissière joins with other specialists, such as David Chanteranne, Anne Dion-Tenenbaum, Alain Pougetoux, Mark Tucker and John Zarobell, to present a series of essays that offer documentation and discussion of the projects for the ceremony, the details of the ceremony itself, regalia created for it and the history of David's multi-year engagement with the painting including his numerous preliminary and preparatory sketches. The catalogue also covers the immediate reception of the painting through prints, paintings and published descriptions, and its legacy, offering some details of its peregrinations after Napoleon's divorce from Josephine and then during the Restoration and July Monarchy. We also learn details of the history, travels and travails of the large-scale repetition begun during the first decade of the 19th century which was not completed until the artist's Brussels exile. The authors appositely place this second composition in the context of the popular art forms of the panorama and diorama.

David's Coronation has been written about extensively in recent decades and has been studied in diverse contexts. In spite of the scholarly attention it has received the composition merits much more extensive investigation. Through its overview of the painting and the historical circumstances that brought it into being, the catalogue reaffirms the richness and remarkable complexity of this monumental composition. Known documents are reassessed and some of the important reviews and descriptions are reprinted in a useful compendium as an appendix, others are incorporated in the body of the text.

The authors address some significant issues and problems related to aspects of the ceremony and David's painting that have intrigued historians and critics since the painting was first exhibited. One has to do with the dramatic change David made in the representation of Napoleon, from an image of the Emperor crowning himself, to the more chivalric version of the new leader crowning Josephine. Documents cited by the authors indicate that David may have made this transformation in August, 1806 and that the change was suggested by David's student, Gérard (the authors use the critic Jal's version of this story published in 1845, one of several versions retold in the 19th century that became part of the David mythology). Some of the most important contributions offered by the catalogue are the discoveries made by intense examination of the painting and related sketches. Laveissière publishes many color details so that we can share and confirm these new points of interest. One of the most fascinating of these discoveries is that of the pentimento of Napoleon raising his crown which can only be seen if one gets very close to the painting and which is very clear in a color detail reproduced in the catalogue (fig. 32, 87).

The catalogue presents in detail several of the major visits to the artist's Cluny atelier while the painting was in progress, visits that were usually reported by the press but were also recounted by David in his autobiographical notes and letters. These visits, especially those of the Empress and Emperor, did a great deal to promote the publicity for the painting and whet the public's appetite for its much anticipated exhibition at the Louvre where it was shown from February 7 to March 21, 1808. The exhibition generated numerous articles as well as published descriptions of the painting and more written responses were forthcoming when it was shown again at the Salon that opened in October, 1808. All of this attention contributed to the mythos and legacy of both the painting and artist during the 19th century.

In sum, this catalogue provides a useful guidebook to the painting and the event that generated it and gives us the opportunity to peruse details of the painting and illustrations that are brought together for the first time.