Arden Reed: Manet, Flaubert, and the Emergence of Modernism 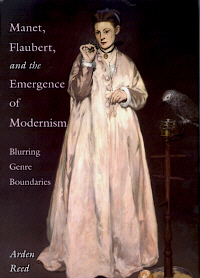 Reed's book, as the title makes explicit, deals with the work of Manet and Flaubert and their roles in the emergence of modernism. In this study of the interpenetration of the boundaries between literature and painting, word and image, Reed seeks to demonstrate how the blurring of genres influenced the development of modernism. The author envisages that his book will furnish a response to two essential questions:

"A double question animates my study. First, can examining the way we read an 'image' in a (representational) painting or read an 'image' in a (realistic) work of fiction teach us something about each medium? [...] Second question: What happens to the relationship between image and text when they undergo identity crises? Specifically, how does the advent of modernism inflect the relationship between literature and painting? But we shall see that this question also reads backward: How do changing image-text relations themselves contribute to producing modernism?" (1)

Thus, it is clear that the author has an ambitious agenda for this book but we can see that his rhetoric has gotten away from him when he attributes identity crises to inanimate objects. Rhetoric and rhetorical strategies will, indeed, play an important role in this book which uses a range of eclectic methodological approaches that include formal analysis, historical contextualization, deconstruction and psychoanalytic criticism.

A prinicipal objective of the book is to contest the famous definition of modernism articulated by the celebrated art critic and formalist Clement Greenberg who proposed that modernism was defined by a schism in literature and the visual arts, domains which had been closely linked in the Western tradition since the Renaissance. According to Greenberg's theory with the advent of modernism literature and art become independent domains so that painting is purged of literary allusions and sources and literature similarly purged of the visual. Greenberg posited Manet as the first true example of modernism understood in these terms. [1] As Reed points out, in defining Manet as the first modernist Greenberg echoes one of Manet's earliest supporters, novelist and art critic Emile Zola who claimed that Manet signaled the end to dependence on subjects taken from literary sources. Zola analyzes Manet's works in largely formalist terms as would later Bataille and Greenberg. Reed suggests that we follow an alternative perspective offered by Baudelaire who in his essay on the Salon of 1859 contends that the choice of subject matter in the visual arts is of supreme importance as indicator of artistic genius, that the mixing of genres is characteristic of modern art and that the painter of modern life can be understood to be akin to a novelist or moralist. For Reed, contemporaries Manet and Flaubert whose careers overlap, fulfill Baudelaire's descriptions of modern art, for both engage in "experimental mixings and juxtapositions" (5) involving word and image.

Reed situates Manet within the literary circles of his friends Baudelaire, Zola and Mallarmé and notes that Manet illustrated a number of texts (including Poe and Mallarmé) and that poets composed verses for his paintings. He points out that in Manet's most well-known paintings such as "Luncheon on the Grass", "Olympia" and the "Bar at the Folies Bergères" his engagement with narrative is complex and ambiguous (Reed acknowledges his debt to Michael Fried's "Manet's Modernism" [2], for his understanding of the artist's career). Reed reminds us that Flaubert is a strikingly visual writer as Proust and others have emphasized and he quotes the following from Flaubert: "When you write you compose visible pictures to yourself" (12). Reed mentions several works by Flaubert that were directly inspired by paintings such as The Temptation of Saint Anthony (1848-72) written in response to a painting attributed to Peter Brueghel the Younger and the Legend of Saint Julien (1875) based on a stained glass window at the cathedral of Notre Dame in Rouen, known to Flaubert primarily through the illustrations in Langlois' Essai historique et descriptive sur la peinture sur verre (1832).

Given his thesis of the blurring of boundaries between word and image in the eponymous artists of this study, one would expect that Reed would find fertile ground in Manet's illustrations made to accompany texts and in Flaubert's great and complex masterpiece The Temptation of Saint Anthony. But he eschews these obvious examples to select three less obvious examples as case studies which he calls a "triptych" (14). At the center of this imagined triptych (did Reed have in mind the religious history and connotations of this art form?) stands Manet's "Young Lady in 1866" flanked by two of Flaubert's stories from his Trois Contes - The Legend of Saint Julien the Hospitaler and A Simple Heart. How will Reed study these works that he brings together in this "triptych" ?to demonstrate the blurring of boundaries that characterize the advent of modernism? He does not. Instead he chooses to study Manet's painting and Flaubert's two stories in separate chapters and informs us that through these discrete studies he will demonstrate how one genre "implicates the other" (17).

Reed contends that a singular phenomenon that bridges the boundaries between Manet and Flaubert in these selected case studies is the "tache", what he defines as the "stain of modernism" (Chapter Three): "On the mirror called ?'realism' taches leave an ineffaceable stain that can signify modernism itself." (57) The author leads us through a dizzying, whirlwind history of the "tache" from Leonardo da Vinci's marks on the wall as visualization of potential compositions to Hugo's inkblots and Cézanne's "stains"?83-91?. Reed discusses the role of the "tache" in Manet's style as noted by art critics of the time, including Zola, and relates them to the use of "taches" in Flaubert's œuvre. Reed maintains that Manet and Flaubert share an aesthetic of the "tache" which Reed characterizes as a signifier of speed, time and history. The idea of the "tache" elaborated upon in chapter three becomes a leitmotif of the book to which Reed will make constant reference.

Chapter Four is devoted to a formalist analysis of Manet's "Young Lady in 1866" along with a study of the range of meanings attached to the woman and the parrot in French culture especially as seen in prints and paintings (most notably Courbet whose "Woman with a Parrot" of 1866 Reed sees in apposite dialogue with Manet). Reed discusses how the juxtaposition of the woman with a parrot in a variety of manifestations connote notions of speech and mimicry as well as eroticism especially in depictions of women with parrots in the harem and parrots as intimate pets. He will, of course, return to the image in his later discussion of Flaubert's woman with a parrot in A Simple Heart. As is well-known, "The Young Lady in 1866" was a full-length monumental portrait of Manet's favorite model, Victorine Meurent, who appears in numerous guises and disguises as a central figure in some of his most famous paintings. In this enigmatic and puzzling life-size portrait she appears as a lady dressed in a peignoir sniffing a bouquet of violets. Adjacent to her on a stand is her pet parrot. A still-life motif of a partially unpeeled lemon is placed at the foot of the bird's perch. Reed does not resolve the ambiguities of the painting which Manet probably intended as part of the essential meaning (that is, our puzzling over the meaning and our attempts to categorize the work which he intentionally thwarts). He does reject the interpretation of Mauner who persuasively analyzes the work as an allegory of the senses [3]. Reed would like instead to consider the painting as an allegory of beholding, the subject of Chapter Five. In this chapter he focuses on an interpretation of the many references to seeing in the painting. He includes the gazes of the lady and her parrot as well as the monocle the lady wears which he situates in the context of depictions of monocles as vehicles of close observation of the arts. Monocles, of course, were also used for reading and appear in paintings of the period performing this function as well. Since monocles were usually sported by men rather than women during this period in France (with notable exceptions such as George Sand in life and Emma Bovary in literature as Reed points out), we are led to consider the monocle as sign (Reed calls it a "tache" in the painting) that ultimately leads to the ideas of castration, a purported "hidden" agenda of the painting. Reed concludes his chapter by proffering the reader a Freudian and Lacanian psychoanalytic view of Manet's "Young Lady in 1866". Reed does not claim that this painting is related directly to literature or a narrative source but since it does invoke the act of reading by means of the monocle this seems to serve as the bridge (however tenuous) to the subsequent chapters on Flaubert.

Chapters six and seven are devoted to a deconstructive/psychoanalytical analysis of Flaubert's two tales from the Trois Contes. According to Reed Flaubert's stories intersect or overlap with Manet's painting via the aesthetics of the "tache". Although Reed has amply shown us that in his selected example of "Young Lady in 1866" Manet does not "translate" texts into images he assserts that Flaubert does "translate" images into texts. He notes the relatively large number of studies devoted to Flaubert's involvement with the visual arts (176) but he will focus on what he perceives as the essential link between Flaubert's visual practices in The Legend of St. Julien and A Simple Heart and Manet's full-length portrait of his model Victorine Meurent, namely the "tache":

In Saint Julien "taches" come forward to stain the beholder, whereas in A Simple Heart a beholder bears down on a tache. In neither tale are taches simply distanced, sublimed, or formalized. "Flaubert's formalizing is dialectical. If his taches enable him to compose self-referential texts about nothing, these marks also do not cease to signify raw matter, content, reference, indelible ink, history, and, sexuality; they do so in shifty and unstable ways, and their resolution is endlessly deferred. The tension between formal and deforming readings is a constant feature of Flaubert's taches: to stain and to efface; to bleed and to congeal; to turn concrete and abstract, or be perceived as content or form; to distance through abstraction and to thrust forward; to make beautiful and to render distasteful" (178).

In chapter six Reed analyzes The Legend of Saint Julien Hospitaler in terms of what he describes as its visualization of violence and sexuality in its transformations of a primary visual source in a 13th-century stained glass window. He deconstructs in detail the appearances of the word "taches" in Flaubert's story which he interprets visually and metaphorically. Similarly, in chapter seven, "Domestic Stains: Graphing Félicité", Reed examines the "taches" and what he posits as "taches" metaphorically in this story after proposing that Flaubert based his "visual" inspiration on Epinal prints. Among the many ideas he proposes in this chapter in which he focuses on the variety of visual imagery is that the protagonist Félicité is a female fetishist.

The conclusion, "Afterimages" reiterates what Reed sees as the links between Manet and Flaubert through the aesthetics of the "tache" and also looks very briefly at the future appearances of "tache" in the 20th-century art in the work of Pollack, Robbe-Grillet and Sartre. This book brings a nexus of interesting ideas to the table that will generate future discussion concerning modernism and its origins. The author also reproduces a wealth of interesting images, including numerous satirical prints of the period. It would have been helpful if the author had situated his study within the broader context of French art, art writings, literature and aesthetics of the 1860s and 70s instead of merely focusing on Manet and Flaubert.