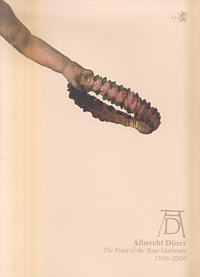 "... jch hab awch dy moler all geschtilt, dy do sagten, jm stechen wer jch gut, aber jm molen west jch nit mit farben vm zw gen. Jtz spricht jder man, sy haben schoner farben nie gesehen" [1]. Writing from Venice to Willibald Pirckheimer in Nuremberg on 8 September 1506, Albrecht Dürer expressed his satisfaction that his newly completed Feast of the Rose Garlands had silenced all of the Italian artists who had criticized his painting technique and, above all, his use of color. Dürer's remarks here and in other letters indicate the importance that he placed on this altarpiece, which he created for the chapel of the German Brotherhood of the Rosary in San Bartolomeo di Rialto. The picture, today in the National Gallery in Prague, remains at the center of any scholarly discussion of Dürer's development as a painter even though its state of preservation has been poor since the late sixteenth century.

The Feast of the Rose Garlands is now the focus of an important exhibition (21 June - 1 October 2006) and a superb catalogue curated by Olga Kotková. This celebrates the 500th anniversary of the painting's completion and the 400th anniversary of its arrival in Prague. Although the past literature on the altarpiece is extensive, this catalogue offers the most thorough discussion, one filled with new insights and archival discoveries. The catalogue has four basic sections: Venice 1506-1606, the Prague Castle 1606-1782, the Strahov Monastery 1793-1934, and the State Collection 1934-2006.

Isolde Lübbeke's "Dürer's Visualization of an Imagined Community" provides an excellent recounting of the painting's commission, iconography, and artistic sources. Maybe because this is the best known chapter in the painting's history, I found some of the author's observations to be overly speculative. Lübbeke does not question the largely unsupported identifications of the various figures portrayed in the picture. Neither does she entertain that it might have been a group representing the brotherhood rather than a single individual (a Fugger?) who commissioned the painting. If Dürer used the studio of Cima da Conegliano, it is surprising that his extant letters to Pirckheimer make no mention of this. Lübbeke assumes too that Dürer had the commission before coming to Venice and that he brought along a portrait of Emperor Maximilian. The prototype for this is an Italian, not a German, profile portrait; see catalogue number I./4. Finally, Lübbeke emphasizes the importance of Stefan Lochner's Adoration of the Magi (Cologne, Cathedral) as a direct source for Dürer; however, there is no firm evidence that the Nuremberg artist saw this painting before 1520.

Stefan Bartilla's "The Brotherhood of the Rosary from Its Origins to Dürer's Time" offers a stimulating examination of the rise of the rosary devotion and the sudden emergence in brotherhoods across the Holy Roman Empire and in Italy. Venice's confraternity was established in 1480. Ludomίr Konečný's "Catching an Absent Fly" explores the illusionistic fly that Dürer once painted on the Virgin Mary's robe. This now lost trompe-l'oeil fly, however, does reappear whimsically printed on various pages of the catalogue. Konečný discusses the classical roots of artists mimicking nature as proof of their pictorial skills plus the diverse meanings that the fly's inclusion might have had for Dürer's contemporaries.

Andrew John Martin's essay on Dürer's altarpiece in the church of San Bartolomeo di Rialto from 1506 to 1606 is especially informative. He addresses the sixteenth century reception of Dürer's painting, which stood in the German chapel just to the right of the high altar. The earliest Italian source of 1548/49 refers to Dürer's painting as one of the artistic highlights of Venice along with the horses of San Marco and pictures by Giorgione and Titian. Using the unpublished register book of the Scuola dei Tedeschi, Martin recounts the painting's sale to Rudolf II in 1606. The picture's poor condition, that included paint peeling off the panel, may have encouraged the brotherhood's decision to sell it. To prevent further damage, the altarpiece was carried by porters, rather than carted, to Prague. Martin includes a documentary appendix (64-67).

Kotková's "The Feast of the Rose Garlands in the Imperial Collections in Prague: 1606-1782" discusses Rudolf II's efforts to collect Dürer's art and its influence upon the artists that the emperor had lured to Prague. Described in the 1621 castle inventory as a "fairly good Marian painting" (125), this suggests that its condition was far from perfect. The major damage to the center of the painting has been attributed to its handling and removal from Prague before the arrival of Swedish troops in 1631 and 1648-49. Kotková carefully re-examines the evidence, which is inconclusive.

Far less familiar is the painting's fate between 1793 and 1934 when it belonged to Prague's Strahov Monastery. Although Evermod Gejza Šidlovský laments the monastery's poorly catalogued archives, he presents a rich, document-based sketch of the altar's acquisition, its subsequent inclusion in Abbot Jeroným Joseph Zeidler's Picture Gallery, established in 1835/36, and new financial information about the costs of the picture's restoration. Vίt Vlnas' "The Romantic Cult of Albrecht Dürer, and the Fleeting Fame of the Feast of the Rose Garlands in the 19th Century" recounts the now familiar portrayals of Dürer as the exemplary Medieval Christian artist by the Nazarenes. Czech artists were far more dispassionate in their celebration of Dürer than their peers in Munich.

The altarpiece's near ruinous state prompted Abbot Zeidler to commission its restoration between 1839 and 1841 by the painter Johann Gruss the Elder (1790-1855). This intervention permanently altered the picture's appearance since Gruss repainted much of the Virgin Mary, the Christ Child, the pope's face, and that of the seated lute playing angel. (See 90-91 for photographs indicating the changes.) Oldřich Doskočil's essay presents a biographical sketch of Gruss and the religious underpinnings of his art. Of particular utility is Kotková's essay on the restoration. This includes a consideration of earlier copies, including Václav Mánes drawing of 1823 (Prague, Academy of Fine Arts; catalogue number III./1), which shows the faces prior to the rather Romantic expressions added by Gruss. As Kotková notes, Gruss' contemporaries were very critical of the restoration.

The final section of the catalogue begins with Vίt Vlnas' intricate reconstruction of the monastery's efforts to sell the Feast of the Rose Garlands. Already in 1925 discussions began about its disposal. Wilhelm von Bode sought to acquire the painting for the Berlin museum and, later, for the Germanisches Nationalmuseum in Nuremberg. Rumors of American suitors for the painting also circulated. While displayed in the 1928 Dürer exhibition in Nuremberg, Hans Tietze questioned the picture's worth and thus derailed the negotiations. Thereafter, Abbot Metod Zavoral initiated the torturous discussions with the Czech government who ultimately purchased the painting in 1934 in exchange for cash and land. Vincenc Kramář's conservation report of 1935, written in Czech, is reprinted. This is augmented by the brief modern technical examination of the altarpiece by Jiřί Třeštίk and Radka Šefců.

Olga Kotková and her colleagues are to be congratulated for this fascinating exploration of one of Dürer's greatest paintings. The essays and the detailed catalogue entries provide a stimulating basis for understanding the reception of the Feast of the Rose Garlands across the centuries. The volume also provides the reader with access to the wealth of Czech-language scholarship that might not be familiar to German and English-speaking audiences.