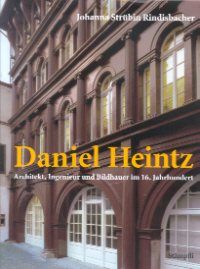 Daniel Heintz (c.1530/35-1596) was an accomplished later Renaissance architect and construction engineer. Since he worked in Basel and Bern rather than at a major European court, his achievements are not widely known outside of Switzerland. Art historians are more familiar with his elder son, Joseph Heintz, painter to Emperor Rudolf II in Prague. Rindisbacher's attractively designed monograph offers the first serious assessment of his multifaceted career. It is also the culmination of her three decades of research and writing about Daniel Heintz and his family.

Following a brief introduction to Renaissance architecture in Switzerland, the text opens with a detailed biography of Heintz. Born in Alagna Valsesia (Italy), just south of Zermatt in an area that was noted for producing stonemasons, he acquired citizenship in Basel in 1559. His training and his activities prior to 1571 are undocumented. Rindisbacher attributes a few minor epitaphs and other works to this period. None of these, however, fully prepares the reader for the creative explosion of Heintz's career starting in 1571 when he was called to Bern. Over the next four years he vaulted the nave and narthex of the Münster, the city's main church, designed its choir screen (destroyed 1864), and carved the large statue of Justitia for the trumeau of the principal portal of this church. His name or initials and mason's mark appear prominently on each of these works. Heintz's subsequent oeuvre was quite varied. He produced an ornamental staircase and portal in the Rathaus in Basel (1581/82); he built three large town houses; and he was appointed as the salaried Baumeister in Bern in 1588. Heintz excelled too as a building and water engineer.

Heintz was active at a moment of transition in Northern European art. Like many of his contemporaries, he utilized both Gothic and Renaissance styles depending upon the needs of the specific project. This dichotomy between the "Teutsch" and the "Welsch" (Italianate) styles had become clearer and more pronounced as the sixteenth century progressed. Patrons often expressed their aesthetic preferences or chose artists according to their abilities to work in one manner or the other. Rindisbacher makes this stylistic duality the thesis of her fine book.

While this is appropriate, the book's organization is at times baffling. Her decision to begin with a discussion of the Italianate style is unfortunate since it is a bit like putting the cart before the horse. She seems far more interested in exploring Heintz's experimentation with Renaissance forms, which represents his modernity, than his continuing engagement with the Gothic. It would have been more effective to open with the remarkable letter that Heintz wrote to the city council in Bern in about 1575 (Quellen 3, 231-233). As Rindisbacher points out, the architect used two terms to distinguish his recent labors in the local Münster. The vaults were done "uß geometrischer Kunst," while the choir screen was "uß der Architecture." Unable for obvious historical reasons to apply our more comprehensive, if imprecise, terms of Gothic and Renaissance, Heintz labeled his art according to two different conceptual methods. He perceived the prevailing Gothic style as being based upon geometric practices, such as rotating a square to create the profile for a pier or manipulating lines to devise an aesthetically pleasing pattern of ribbed vaults. Heintz contrasted this with "Architecture" or the Italian Renaissance tradition, which revived ancient Greek and Roman architectural canons. Vitruvius's treatise, De architectura libri decem, provided the basis for Renaissance theoreticians from Leon Battista Alberti to Sebastiano Serlio. Since the choir screen ("ein lustig Werck"), dismantled in 1864, employed an Ionic arcade and frieze, Heintz clearly distinguished its style from that of the vaults. Although Rindisbacher intelligently discusses these two styles, I wish she had speculated why Heintz or his patrons desired to mix these different manners within the same church. Would his contemporaries have been surprised by this juxtaposition of forms? Would they have expected the vaults to match the appearance of the rest of this Gothic church, which was started in 1421, but permitted a greater range of expression for its non-structural decorations?

The heart of the book (39-106) is a detailed discussion of these rival styles. Most of the chapter is devoted to Heintz's adoption of classical architectural elements. He designed three prominent town houses: the Zunfthaus zu Weinleuten (undocumented, dated 1578) and the Spiesshof (c. 1590) in Basel plus the now destroyed Gesellschaftshaus zu Pfistern (Bakers' Guildhall, 1593-96) in Bern. These reflect the latest architectural fashions of Venice and northern Italy. Rindisbacher notes that Heintz seems not to have traveled back to Italy once he settled in Basel and then Bern. His knowledge derived primarily from contemporary architectural treatises. One of the author's major discoveries, which is buried on pages 110-111 in the next chapter, is the contents of Heintz's personal library, which passed through his successors to the Stadtbibliothek in Bern. He owned copies of the published treatises of Vitruvius, Serlio, Giacomo Barozzio da Vignola, and Jan Vredeman de Vries, among others.

Rindisbacher persuasively shows how the engravings in these architectural treatises directly inspired his designs for the facades of the three houses. The window treatment and the application of the classical orders (Doric, Ionic, and Corinthian) of the Zunfthaus zu Weinleuten derive from Serlio's De Architectura libri cinque (Venice, 1569). These plates functioned as useful patterns for his elevations. As he became more comfortable with this vocabulary, Heintz's own inventiveness surfaced. In the Spiesshof, he used engaged columns rather than pilasters for more surface articulation. Instead of the canonical application of the orders, the facade begins with a Doric and Ionic storeys only to be succeeded by another Ionic floor and ten volute console, which project out boldly just below the roof.

Heintz's reliance on his models was limited to the facades. Other than some attractive carved herm caryatids in the Zunfthaus zu Weinleuten (Figures 241-242), there is little about the interiors of these buildings to suggest Italian or classical influences. In fact, the Spiesshof employs Gothic rib vaults (Figure 177). Heintz saw no contradiction in this because he applied the different styles according to their respective strengths: exterior design in the case of the classical forms and vaulting in the case of the Gothic.

The final chapters of the book consider Heintz as a sculptor and an architect. His role as a sculptor is problematic. Only the Bern Münster's Justitia is signed. Clad in a clinging, pseudo-classical dress and robe, she was likely also inspired by a contemporary print or plaquette. Heintz had some difficulties with the contrapposto as her torso and legs are slightly out of alignment. Yet given the dearth of Swiss large scale sculpted figures, other than on fountains, Justitia is quite competently carved. Rindisbacher attributes another weaker Justitia in the Basel Rathaus and, far more conjecturally, the wooden figures of Wilhelm Tell and his Son in the Bernisches Historisches Museum to Heintz. I wonder whether Heintz carved any of these statues, other than the Bern Justitia, or any of the various keystones, masks, and epitaphs. He likely engaged local sculptors to work from his designs.

Rindisbacher has written a stimulating monograph about Daniel Heintz. She includes numerous explanatory discussions set off from the main text. These cover topics such as architectural treatises, Bauherren, Gothic finial booklets, epitaphs in Basel, reading ground plans, and so on. What was Heintz's artistic legacy? Although Rindisbacher briefly remarks on the importance of his art, I wish she had developed her conclusion to address how his ideas might have influenced either of his sons or other contemporary Swiss architects.