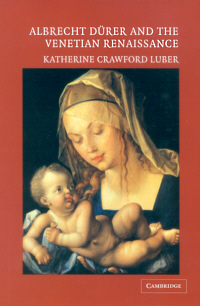 In 1943, Erwin Panofsky wrote that had Dürer been only a painter, and not a printmaker, he would not have changed the course of art history. Erasmus, Dürer's contemporary, called him the 'Apelles of black lines', also seemingly viewing Dürer's prints as more important than his paintings. Katherine Crawford Luber claims that this emphasis on the primacy of his prints has dominated Dürer scholarship, and sets out to examine the importance of his paintings to our understanding of him as an artist, and to the development of German art in the 1490s and into the early sixteenth century. As she does so, she has a more general point to make - that technical analysis of paintings should be taken more seriously as an interpretative tool.

She begins by challenging the long-held notion that Dürer travelled to Italy in 1494, and sets out her aim of using Dürer's technical development to claim that it is unlikely that he had direct contact with Italian art before his documented visit to Venice in 1505. This argument is based upon her realisation that his method of working changes during this visit; prior to that, the underdrawings and the way he applies paint remain within the Netherlandish tradition, while after 1507 he begins to use techniques favoured by the Italians, or specifically by the Venetians. She claims that 'the paintings themselves show that Dürer had little, if any, familiarity with Italianate painting techniques before 1506' (62).

The painting around which she centres her study is the great altarpiece that Dürer painted in Venice in 1506, the Feast of the Rosegarlands, to which she devotes two chapters. She claims firstly that the great care with which Dürer prepared this work, the concerted effort he makes to learn Italian techniques, even the fact that he painted the whole panel himself, all suggest that he had not previously had the opportunity to study Venetian artistic practice. She then stresses non-technical factors in the creation of the painting, to suggest that Dürer is embracing broader Renaissance interests and practices. For example, she sees Dürer's written comments about the length of time it took to paint the altarpiece as examples of Renaissance rhetoric; and she reinforces the idea that the painting was made not to emulate Venetian painting for its own sake, but to show equality with Venetian artists, that his relationship with Venetian artists, including Bellini, was an example of eristic imitation rather than simply copying what he saw Venetian artists doing.

She also alludes to the problem of nineteenth-century scholarship, which was keen to promote Dürer as an international artist, and the entrenchment of the belief in the earlier visit to Venice stems largely from the political machinations surrounding Dürer in the wake of German unification and well into the twentieth century. Panofsky's interpretation of Dürer's life and art, presented in his wartime monograph and with its own political agenda, has proved resilient; such is the depth of his scholarship, and such is the italocentric nature of art history with regard to the Renaissance, that his view of Dürer as primarily an artist who turned his back on mediaeval German art and embraced the new ideas and ideals of Italian art struck a still-resounding chord. Katherine Crawford Luber's study offers a direct challenge to this view. She states that 'Dürer never uncritically adopted the techniques he discovered in Venice; instead, he synthesized them in relation to his own native traditions' (108). This is an important contribution to Dürer studies, for too often the persistent influence of Northern art throughout his career is overlooked.

She shows, for example, that in the painting of the Virgin and Child with a Pear of 1512, Dürer uses different techniques for the Virgin and for the Child - the Virgin is painted using northern techniques, the Child using techniques learned in Venice. She extrapolates meaning from this, that Dürer is using technical differences to portray the human flesh of the Virgin and the divine flesh of Christ. The stylistic difference between the Virgin and the Child have long been noted, but in investigating the technical elements of each - the underdrawing and the application of paint - she claims something more definite than a stylistic puzzle. She links this to an idea from medieval theology, where the relationship between the Old and New Testaments is related to different painting techniques. A degree of speculation creeps into her thesis from this point on, but she does at least highlight the complexity of Dürer's relationship with both Italian and Northern art.

Her final chapter examines Dürer's portraits of the Emperor Maximilian I, and here even the style of writing becomes more speculative: 'Although it is certainly only speculation, I believe that Dürer was preoccupied with this portrait of the Emperor because, for him, that moment and that union of artist and Emperor had an allusive, almost transcendental aura' (167). The image is 'allusive' to the tradition of St Luke painting the Virgin, and is thus, she claims, significant in terms of Dürer's idea about himself as an artist, and his relationship with the Emperor. Dürer made one drawing of the Emperor from life, at the Imperial Diet in Augsburg in 1518, and reused this drawing in a variety of different portraits; her study of the underdrawing and infrared photographs of the portraits to examine why Dürer did not diverge from the original drawing is interesting in itself, but the allusion to St Luke seems unnecessary.

She concludes this last chapter with a strong plea for technical investigation to be taken seriously as an interpretative tool within art history. Her own thesis contains some serious support for this - the early chapters about Dürer's underdrawings and the preparation of the Feast of the Rosegarlands offer some persuasive insights that are only available through technical and technological study. Yet while speculation is not necessarily a bad thing, it provides here a disappointing conclusion to what started as a strong thesis.

Overall, the strength of the book is in the detailed analysis of Dürer's preparatory techniques, and the way he later incorporates Italianate developments into his native Northern tradition of picture making. Whether this shows that Dürer did not go to Italy in 1494 is less important than how it might change our understanding of Dürer's art after 1507. She certainly emphasises the continued northernness of Dürer's technique, and this is an aspect that is particularly welcome, for it helps to explain why Dürer never really embraces Italian ideals wholeheartedly. Much of the more speculative material in the book is interesting, but at times contrasts too much with the tightness of the technical analysis. The call for technique to be taken seriously as an interpretative tool is a heartfelt one; the meanings she then extrapolates from her findings need further investigation, but at least the book presents the material in this way, raising possibilities as much as suggesting solid answers. As such, it is a book to be recommended, to be mulled over, and to be regarded as a valuable addition to contemporary scholarship on Dürer.