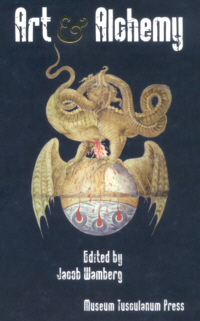 This publication is focussed on the still surprisingly neglected area of the interplay between the visual arts and the esoteric science of alchemy. The collection of articles covers the time span from the late Middle Ages to the twentieth century. Areas on which its twelve authors cast new light include alchemical gender symbolism in the Renaissance, Mannerist and Modernist art, alchemical ideas of tranformation in Italian fifteenth-century landscape imagery, Dutch seventeenth-century portrayals of alchemists, and alchemy's tortured status as a forerunner of photography.

In their introduction Jan Bäcklund and Jacob Wamberg point out that in an era in which the most divergent kinds of contextualization have become part of the art history agenda it seems strange that alchemy is still a relatively neglected artistic context.

Partly because of alchemy's dismissal from the Parnassus of rational sciences, the interplay between this esoteric knowledge and the visual arts is still a surprisingly neglected research area.

The various articles deal with the phenomenon of the suspicious aura of quaintness and amateurishness in which alchemy has been shrouded since the Enlightenment, and since the nineteenth century discovered the "true" principles of scientific investigation and relegated alchemy to the area of aborted sciences.

The authors underline that the cosmological ideas of late Medieval and early modern cultures overlap with alchemy in important areas and they discuss the problem of evaluating to which degree alchemical symbolism was used by artists of the late Medieval and Early Modern periods.

Aksel Haaning examines in his essay "The Philosophical Nature of Early Western Alchemy" the formative period form 1150 to 1350. He gives a kind of survey of the reception of the art of alchemy in the high Middle Ages. Philosophers were seeking new foundations for science and philosophical research, and from this new science and methodology, modern chemistry was born. Accordingly, alchemy was part of the philosophy of the mind in the Middle Ages because it was gradually developed as a science of nature and in this respect, it is a tremendous development in the general history of science.

Jacob Wamberg concentrates on alchemical themes and motifs in North Italian Quattrocento landscape imagery. He analyses the artificial and organic qualities of the rocks of Renaissance landscape imagery which indicates - in his opinion - that alchemical thinking is deeply interwoven with general premodern cosmological schemes.

After the new rationalist sciences, chemistry and physics, condemn alchemy as an obsolete bundle of mistaken ideas and practices, alchemy acquires an exotic and occult quality that makes it suitable for connoting counter-rational ideas.

Laurie Dahlberg refers in her article "The Material Ethereal. Photography and the Alchemical Ancestor" to photography's early stages. One might think that alchemical metaphors would have been useful in establishing the genealogy of photography but, as Dahlberg points out, the suppression of alchemy as an aborted science was very dominant.

By the end of the nineteenth century, the old popular notion of photography as a quasi-magical craft had been virtually erased, not only through the careful construction of a rational image for photography. This demystification also took place naturally as photography's practice increased and dispersed throughout the cultural strata.

Urszula Szulakowska analyses alchemy's heritage in twentieth-century modernist and avant-garde art where artists use the term loosely, in particular seeing the creative process itself as a kind of alchemy. Her essay "The Paracelsian Magus in German Art" pointed out that the figure of the sixteenth-century Paracelsian magus, an alchemically gifted seer who has a divine right to exercise power over others, constitutes an important patriarchal heritage in the self-understanding of the modern male artists. In her article Szulakowska focuses on the sculptures and installations of Joseph Beuys and Rebecca Horn. Both artists are discussed in order to reveal their very different approaches to the metaphorical artistic alchemy. Szulakowska reminds us that Beuys self-image as magician-healer was influenced by Jungian psychology in which alchemical symbols and actions were interpreted as being a proto-psychology involving the process of self-individuation. Unlike Beuys, Horn produces a negative, ironic commentary on the traditional masculine alchemical myth of self-empowerment.

Does the artist become a priest-magus of a new cult of aestheticism? The distillation of articles derives from an international conference entitled "Art and Alchemy", which took place at the University of Aarhus (Denmark) on December 2001. With the thematically diverse selection the editor contributes to the understanding of alchemy's role in the history of art.