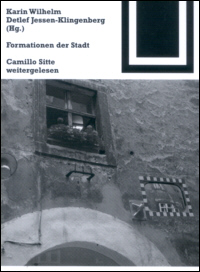 Almost a hundred and twenty years after the publication of Camillo Sitte's (1843-1903) "Der Städtebau nach seinen künstlerischen Grundsätzen" (1889), the editors of this compact volume invite us to read further. "Formationen der Stadt: Camillo Sitte weitergelesen" includes two essays by the editors and an anthology of articles and lectures by Sitte with related contributions by contemporaries.

More influential in Germany than in his native Austria, Sitte's book also had constituting impact on the discipline of city planning as it reached an international scholarly and practical arena. Sitte visited, studied and reflected on older cities in order to elaborate the principles which had contributed to their successful design. He bemoaned the impact of "modern city planning, where arbitrary drawing-board decisions ha[d] already taken the place of gradual historic growth." [1] A stance toward the work of Sitte defined the contemporary and subsequent generations of planners and theoreticians, from Stübben to Le Corbusier, Boyarsky and Koolhaas to name just a few. Delayed publication of an English translation did not keep Sitte out of the international planning debate. Writers such as Raymond Unwin and Werner Hegemann, contributed to the dissemination of Sitte's work. [2]

The German-speaking audiences welcomed Sitte's book, with a second edition a month after the first, and two subsequent ones in 1901 and 1909, the latter after Sitte's untimely death in 1903. The 1902 French translation by the medievalist Camille Martin altered the original text. [3] English-speaking readers had to wait for the 1945 Stewart translation, which Rudolf Wittkower aptly qualified as disappointing. [4] Not until the 1965 translation and companion critical volume by George R. Collins and Christiane Craseman Collins did the English-speaking readership have access to a critical version of the text. [5] The French edition had therefore problematic impact on the reception of Sitte's work abroad.

In this volume, Karin Wilhelm's essay "Ordnungsmuster der Stadt. Camillo Sitte und der moderne Städtebaudiskurs" provides an historical and cultural context for Sitte's writings. Complementing the 1965 Collins volume, which accounts for Sitte's place in the history of city planning, Wilhelm focuses on the intellectual forces and figures which constituted the milieu in which Sitte grew, trained as an art historian with an interest in the sciences, worked as director of Applied Art State Schools and developed his theory on cities. [6] This grounding in the intellectual and scientific climate of the time, includes influences as varied as Rudolf Eitelberger von Edelberg, Joseph Hyrtl, Gustav Theodor Fechner and Reinhard Baumeister and connections with the work of contemporaries such as the sociologist Georg Simmel. The essay turns to the influence of Sitte in the German-speaking world to conclude with a brief examination of his Anglo-Saxon impact.

Much shorter, Detlef Jessen-Klingenberg's "Camillo Sitte als 'leidenschaftlicher Verehrer des Barock'; Zur Rezption im Umfeld Werner Hegemanns" outlines English-speaking reception between 1922 and 1965 while German-speaking activity was minimal. For instance, Le Corbusier's criticism of Sitte and ensuing rebuttal by S. D. Adshead never reached Germany. [7] As a Sitte kindred spirit and swimmer against the prevalent city planning currents, Werner Hegemann disseminated Sitte's ideas in the United States [8], before the publication of the 1945 translation. Beyond reception of German and English publications, the author examines how their influence played out in the Ulm cathedral square competition of 1924-1925, which offered fertile ground for analysis with almost 500 entries.

The documents which constitute the greatest segment of the volume are divided into five sections: biography; artistic and formal aspects of city planning; Vienna as world city; perimeters and city flight; metropolis and space configuration. These documents by Sitte and contemporaries gather for the first time from widely divergent sources a well selected critical mass of writings and convey a sense of the discourses that preceded and followed the publication of "Städtebau". The texts are edited but not annotated.

A bibliography of secondary sources for the two essays is complemented by a separate list of Sitte's writings, brief biographical and topical glossaries as well as succinct personal and location indexes. The two bibliographies make a substantial contribution to Sitte scholarship with recent entries and limited overlap with the Collins 1965 and 1986 volumes. The expedient of separate bibliographies fits within the volume sequence but does point out the need for a comprehensive annotated bibliography on Sitte and his influence. Black and white illustrations are sparse and functional, the focus being on the textual material.

With their essays and the compilation of selections from Sitte's prolific writings and other hard to come by publications, the editors have provided a great service to the study of city planning and architecture history. Sitte's "Städtebau" is a seminal text, one which invites critical readings and close analysis. [9] As Wilhelm points out, "Städtebau" as "Bausteine zu einem Theorienentwurf" (86) or constituting theoretical sketch has enduring currency as the older sections of our cities which have survived "arbitrary drawing board decisions" [10] are turned into popular and income-producing pedestrian enclaves. These are now perceived, as Sitte did, at the pace and angle of the walking human being. This volume encourages not only to read "weiter" but also "wieder". One could look forward to an English translation of this book, but given the nature of Sitte's text and the avatars of its translations, anyone serious about understanding Sitte, should be prepared to (re)read "Städtebau", and this volume, in the original German.

[2] Raymond Unwin: Town Planning in Practice: An Introduction to the Art of Designing Cities and Suburbs, London 1909 and Cristiane Crasemann Collins: Werner Hegemann and the Search for Universal Urbanism, New York 2005.

[5] Sitte (note 1), and George R. Collins / Christiane Crasemann Collins: Camillo Sitte and the Birth of Modern City Planning, New York 1965, both republished with minor updates in one volume by Rizzoli in 1986.