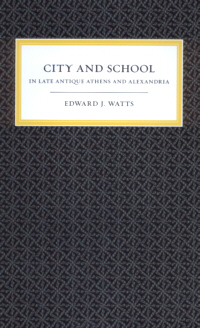 City and School in Late Antique Athens and Alexandria is an important contribution to the intellectual history of late antiquity and to the general history of both cities. Edward Watts's purpose is to "tell the story of education in these two cities from the second until the sixth centuries" (22). Chapter 1 introduces (21-22) the book's central theme: "the determinative effect that [...] specific local settings had upon the shape of teaching" in late antique Athens and Alexandria. Watts divides the next eight chapters evenly between those two cities, which receive four chapters each. The Athenian story begins bleakly in Chapter 2, with the devastating Herulian invasion of 267. Its ruinous effects on local landed elites led to the "increasing wealth and power of Athenian teachers relative to the rest of the city" (42). Prohaeresius dominates Chapter 3: his Christianity, Watts argues, accounted for both his patronage by Constans (61) and his strained relationship with Julian (65). This effectively set a precedent, as a teacher's religion came to matter more at Athens than at Alexandria. Chapter 4 chronicles the rise of Neoplatonic philosophy in fifth-century Athens, culminating in the prominence of pagan theology under Proclus. This new religiosity set the stage for Hegias and Damascius, whose refusal to hide the pagan content of their teaching ran afoul of imperial legislation in 529. Watts argues that the closing of Damascius's school was not part of a general move against Athenian schools (137), but merely a local interpretation of imperial legislation against divination. (Readers familiar with Watts's other work will recognize Chapter 5 as closely related to and reliant on Watts [1]).

The Alexandrian chapters by contrast chart a somewhat more positive course. Chapter 6 is a tale of collaboration between Christians, pagans and Jews (152-153), exemplified in the third century by the school of Ammonius Saccas and the teaching of Origen. The subsequent fourth century Christian "decampment" (186) from the city's philosophical schools, explored in Chapter 7, is largely the result of Athanasian opposition to Arianist philosophy. The climactic murder of Hypatia deprived Alexandria of an "inclusive" school (203) for both pagans and Christians. The resulting increase in Athenian-style Neoplatonism, described in Chapter 8, elicited an aggressive response from the philoponoi. The compromise made between Ammonius and Peter Mongus ensured that a religiously neutral philosophical education survived in Alexandria into the sixth century. Chapter 9 details the ongoing attempts of John Philoponus to discredit Olympiodorus, whose decision "to make his teaching acceptable to the Christian members of his audience" (254) ensured his long-term success.

The book's conclusion gives full statement to a thesis presented in parts throughout the book. Watts argues (259) that "Pagan philosophy in late antiquity lived and died based upon the abilities of its teachers to adapt to the religious climate of the city around them". Philosophy survived at Alexandria because its teachers assured Christians that they would receive a doctrinally unadulterated education without putting their religious faith at risk. Philosophy failed at Athens because its teachers made no such assurances. In other words, the ultimate difference between the philosophical schools of Athens and Alexandria was their ability to reach compromise with the religious communities of their respective cities.

The story of philosophical education at Athens and Alexandria has been told many times, and readers may find themselves on familiar terrain. Athens and Alexandria have been called the Oxford and Cambridge of antiquity. The historiographical debate over the educational differences between these two ancient cities is one of form versus content (see Vinzent [2]). Watts shows a slight preference for content as the central difference. He has argued elsewhere that students left Alexandria for Athens in the fifth century because they found Alexandrian doctrine impure, and that balance returned between the cities only after Athenian Neoplatonic content established itself at Alexandria (see Watts [3]). Similar arguments appear herein as well (91-92). Watts also notes content shifts within institutions themselves: Damascius's opposition to some Proclan thought amounted to an intellectual revolution at Athens (125-127).

What allows Watts to escape the debate of form versus content, and what ultimately makes this work necessary reading, is his insistence on embedding the institutional history of the schools within a larger urban context. This is especially well done in his Athenian narrative, where Watts traces the relative strength of the urban elite through the archaeological record. (Here, he is particularly reliant on Frantz. [4]) The ornate houses to the southeast of the Agora destroyed in the Herul invasion of the 3rd century (39) are the physical signs of a crisis that gave relative economic ascendancy to the Athenian teaching class. The epigraphic record and the elaborate Areopagite structures erected in the late 4th century (80-82) highlight the survival of the city's pagan elite in spite of Christian dominance at higher levels, an issue central to the Christian response to the Neoplatonic turn in Athenian philosophy.

The only bumps in an otherwise smooth narrative are minor cases of authorial overreach. One such case is Watts's Chapter 2 discussion of "the informal yet well-defined system of controls that governed education" (47) in fourth-century Athens. Watts describes this system as imposed by proconsuls and city councilors (48), yet city councilors play little role in his narrative of the subject. They appear chiefly in the cases of Herodes Atticus and his student Heracleides, but these are second-century examples, and not directly relevant to the post-Herulian situation. The Athenian city council does not become a powerful player until Chapter 4, when Watts describes the economic recovery of the Athenian councilor class in the late fourth century.

These complaints are minor, and take little away from the work as a whole. Watts's book, a revision of his Yale dissertation under John Matthews, is pleasurable reading and his central argument is convincing. Philosophy's failure in Athens and success in Alexandria are parts of a larger story, the urban context within which Watts grounds his work. Alexandria had a long tradition of discourse between disparate communities which made fertile ground for philosophy. Philosophy failed at Athens, "an otherwise stagnant city" (128), because Athens itself failed.