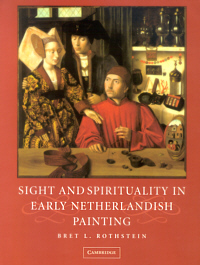 As stated at the outset the avowed purpose of this book is to examine the "centrality of visual experience" in certain Netherlandish paintings of the fifteenth century and to put them into the context of contemporary devotional practice. In a chapter devoted to each, Rothstein discusses Rogier van der Weyden's Altarpiece of the Nativity (Bladelin Triptych), Berlin, Staatliche Museen, Gemäldegalerie; Jan van Eyck's Virgin and Child with Canon Joris van der Paele, Bruges, Groeningemuseum; Jan van Eyck's Virgin and Child with Chancellor Nicolas Rolin, Paris, Musée du Louvre, and Petrus Christus' A Goldsmith in His Shop, New York, Metropolitan Museum of Art. These are all outstanding examples of early Netherlandish painting, but the publisher has lamentably chosen to illustrate them and the other pictures in the book with black and white reproductions that are often mediocre in quality, with some tending toward a monochrome gray tonality. It is thus often impossible to follow the author's descriptions. A few well-chosen color plates and greater care in printing the black and whites would have improved the book's usefulness greatly.

How one reacts to the content of this book will depend to a large extent on how one feels about the kind of language Rothstein uses. Despite its currency in much art-historical writing I am one of those who think that privilege is first a noun, and was thus dismayed to find it used as a verb in several places, for example on page 49: "...the Bladelin Triptych's tendency to privilege the optical over the verbal...". The reader also has to contend with sentences such as the following, on page 138: "In response, sophisticated painters of the sort we are discussing chose to approach the act of painting as a process of cultivating reflexive visual experience. That is, they treated their task as that helping direct the interpretation of visible signs continually back on itself in a process of hermeneutic self-reform."

Central to Rothstein's analysis are paradox, reflexivity, and self-reference, ideas that appear in various forms throughout the book. In particular, he is taken by the seeming paradox of Netherlandish realism, the use of convincing corporeal illusionism to lead the viewer into a state of meditation and devotion that transcends images. To establish the religious context for this situation Rothstein quotes extensively from the writings of three major theologians: Jan van Ruusbroec, Jean Gerson, and Geert Grote. As Rothstein is quick to point out the inclusion of Ruusbroec and Gerson is meant to establish prevailing attitudes rather than direct influences. Nonetheless, making available in English the comments on these three men on such topics as vision, visionary experience, and freedom from images as well as the importance of silent, internalized meditation is, for me, one of the most useful contributions of the book.

Disentangling the thicket or words and ideas one discovers that Rothstein's conclusions are often quite simple. In van Eyck's Virgin and Child with Canon Joris van der Paele the sitter's meditation is so complete that it is disconnected from the physical world so splendidly created by the artist. The depiction of the Virgin and Child with Chancellor Nicolas Rolin is viewed as a reconciliation between Rolin's earthly concerns (his lands and possessions on the left side of the painting) and his spiritual aspirations, the sacred realm on the right side occupied by the Madonna and Child. Rothstein does effectively quote Gerson on the necessity of balancing active and contemplative concerns for those who live in the secular world. In a Goldsmith in His Shop by Petrus Christus, the author, predictably, finds a paradox: "After all, by refracting desirable materials through the dematerializing lens of pictorial representation, Christus privileges vision specifically at the expense of the other forms of sensation - most notably touch, which the painting both invites and depicts. Vision thus triggers desire while simultaneously serving both as a signal of and a surrogate for it." (8) At the end of the book Rothstein discusses this painting as at once a display of luxury goods and as an object of self-promotion in which Christus advertises his skill and craftsmanship.

In a short epilogue Rothstein relates the major themes of the book - paradox, reflexivity, and self-reference - to notions of play and suggests parallels with the verbal wit and virtuosity of contemporary literature, in particular the works emanating from the chambers of rhetoric (rederijker kamers). On balance this is a book that is a challenge to read yet one that offers substantial insights into early Netherlandish visual culture.