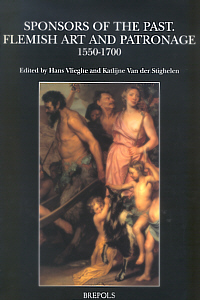 These twelve papers are the proceedings of the symposium organized by the Faculty of Letter, Department of Archaeology, Art History and Musicology at the Catholic University of Leuven (Louvain) on December 14 and 15, 2001. The initiative of the colloquium came from the Wetenschappelijke Onderzoeksgemeenschap Vlaamse Renaissance- en Barokkunst, supported by the Fund for Scientific Research, Flanders. The aim was to investigate the many types of patronage regarding Flemish art, to differentiate between its princely, aristocratic, ecclesiastic, as well as civil forms, and to shed light on this rather neglected aspect.

The articles are in English, French, Dutch, and German. The two editors of the volume, Hans Vlieghe and Katlijne Van der Stighelen submitted the largest contributions. Hans Vlieghe investigates the patronage of archduke Leopold-Wilhelm (1614-1662) during his time as governor of the Southern Netherlands, from 1647 until 1656 (61-90). The author gives brief accounts of the most important artists represented in the Duke's collection, in particular Jan van den Hoecke and David Teniers, who probably also served as agents and acquired art for the archduke. However Leopold-Wilhelm made it clear that the ultimate decision was his alone. Among the artists working for him were Gaspar de Crayer, Cornelis Schut, Thomas Willeboirts Bosschaert, Theodor van Thulden, and Philippe de Champaigne. None was elevated to his court painter, however. The works Leopold-Wilhelm collected reflect his eclectic taste. Many are of religious subject matter and by the best-known artists at that time who were influenced by Rubens and Van Dyck. When the archduke had himself portrayed he preferred being painted in full armor, thus combining the religious and the worldly aspects as Miles Christianus.

Katlijne Van der Stighelen presents one of the rare female artists, Michaelina Woutiers or Wouters (ca. 1620-after 1682) from Mons or Bergen and deals with archduke Leopold-Wilhelm's predilection for her works (91-116). Beginning with Michaelina's four paintings in the archducal collection, now all in Vienna (Kunsthistorisches Museum), Van der Stighelen proceeds to publish here ca. a dozen paintings that all seem to date between 1643 and 1659. The article also sheds light on Michaelina's painter brother, Karel (Charles) Wautier, with whom she shared an apartment in Brussels probably since the early 1640s.

Three of the articles deal with the relationship between Flanders and Spain with new names of collectors and underline the close ties between the two countries further. José Juan Pérez Preciado's contribution details the influence of the collections of two Flemish politicians on the Spanish court, namely Jean de Croÿ (died 1638), second count of Solre, and Philippe-Charles of Arenberg, sixteenth duke of Aarschot and prince of Arenberg (1597-1640) (17-36). Both lived in Madrid and imported art from Flanders. De Croÿ, for example, imported hunting scenes in the 1620s that predate the taste of the Spanish court for works by Frans Snyders and Paul de Vos. At his death, count Solre owned 169 paintings that also included a number of still lifes by the Spanish artist of Flemish descent, Juan van der Hamen (1596-1631). Philip IV was one of a number of well-known buyers at the public auction of De Croÿ's collection that began on July 1, 1638. The most significant among the many other buyers was Don Padre Valle de la Cerda, who was close to the all-powerful Prime Minister, Count-duke of Olivares.

Philippe-Charles of Arenberg spent the last six years of his life in Madrid in prison because of treason, the later years sequestered in his house in the city's center. From here he continued his collecting activity through agents, among them Canon Tassis in Brussels. The artists from whom Arenberg purchased paintings were Paul de Vos, Frans Snyders, Gaspar de Crayer, and Salomon Noveliers, court painter to the archdukes in Brussels. The best known of several Rubens paintings that Arenberg owned was the Wolf and Fox Hunt, believed to be the work today in New York (Metropolitan Museum of Art). It was bought by another highly regarded Spanish collector, the Marquis of Leganés, at the Arenberg sale. The duke of Aarschot was also responsible for the acquisition of Rubens's late Martyrdom of St. Andrew for the Flemish Hospital in Madrid, where it still remains.

In his contribution on Rubens and Philip IV: a Reappraisal (47-60) David Howarth suggests that based on unpublished correspondence in the so-called Letter Books of Sir Balthasar Gerbier, the English Agent in Flanders from 1631-1642, it was the Cardinal-Infante Ferdinand who more likely commissioned the Pompa Introitus into Antwerp of 1635 rather than Philip IV. In Howarth's opinion the Spanish king was much less of an art patron than is generally believed. This suggestion seems to be supported by the fact that during the time Rubens stayed at the Spanish court in 1628 Philip IV only commissioned the portraits of the Royal family from the artist. Howarth further supposes that judging again from Gerbier's correspondence the Cardinal-Infante was the one who conceived the Torre de la Parada commission and who dealt with Rubens directly.

Barbara Welzel examines how Rubens transformed the composition of his early Adoration of the Magi of 1608 (229-38). Originally painted for the city of Antwerp to celebrate the Twelve Years' Truce and hanging in the Antwerp Town Hall, Rubens changed the painting in 1628/29 during his brief stay at the Spanish court into a work that aimed to flatter King Philip IV since it was now hanging in the Spanish Royal collection. Welzel points out that the fifty-one year old artist now included himself wearing the dagger, thus alluding to his ennoblement together with the gold chain, a princely gift. Rubens thus changed his early work into one that recalled his position as a court artist, underlining his double function at that time at the Spanish court, where he officially was an artist and painter but unofficially represented the Infanta Isabella and the Brussels court in peace negotiations between England and Spain.

Sabine van Sprang suggests a re-evaluation of the hierarchy of the painters working at the Brussels court of Albert and Isabella that was proposed earlier by Marcel de Maeyer in 1955 (37-46). She points out that Rubens's position as court painter was essentially honorific and that his yearly salary was twice that of anybody else's. From 1625 until 1629 the artist even received the title of "ayuda de camera", a designation usually reserved for nobility.

Christine Göttler's Saintly Patronage: Peter Paul Rubens and Bishop Maximilian Villain de Gand in the Cathedral of Tournai (135-56) sheds light on the commission, the choice of subject matter, and the original placement of Rubens's two altarpieces: The Ascent of Souls from Purgatory (still in the Cathedral, but no longer on the altar at the very end of the choir) and Judas Maccabeus's Prayer for the Dead (today Nantes, Musée des Beaux-Arts). Before the French Revolution these two altars were installed back to back.

Jeffrey M. Muller explains that although St. Jacob's was the leading church in Antwerp after the Cathedral, it had to shut down in 1659 because of lack of funds (117-34). However, its new chapter of canons, founded only three years before, was able to flourish thanks to prebends that eventually funded the choir stalls, rood screen, and most of the marble balustrade that fence the choir off from the ambulatory. Through their efforts the church received an exclusive choir space, finished before 1671.

Barbara Haeger shows that the abbacy of Johannes Chrysostomous van der Sterre from 1629 to 1652 brought unprecedented growth to the St. Michael's Abbey in Antwerp (157-79). This Premonstratensian or Norbertine Abbey (1124-1797) played a key role in shaping Antwerp's Catholic identity.

Valérie Herremans discusses sculpted altar frames by, among others, the Colyns de Nole, Hans van Mildert, Sebastian de Neve, Artus II Quellinus, and Peter II Verbrugghen and shows that as far as patrons were concerned, the veneration of the religious images in the altar paintings was the focal point (181-202). Often there existed cooperation between the painter and the sculptor in creating the altarpiece, while the patron had the last say. A diagram illustrates the various interchanges.

Bert Timmermans, finally, analyses the existence of networks and the various levels of patronage in the arts in Antwerp in the seventeenth century (203-27), while Krista De Jonge discusses the buildings of Jacques Du Broeucq (1545-1556), a model court architect (1-15).

This is a very worthwhile publication that includes much new information based on on-going research, such as the oeuvre of Michaelina Wouters, the strong ties between Flanders and Madrid concerning the art trade, new insights into the patronage of St. Jacob's church in Antwerp and the former St. Michael's Abbey, and of Rubens's two altars in Tournai cathedral. All the articles are well illustrated and heavily footnoted, full of additional information. They also reflect the extensive archival research of the speakers.