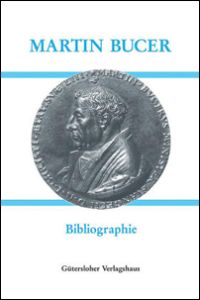 Over the past fifty years a steadily growing body of literature has developed concerning the Strasbourg reformer and churchman Martin Bucer, encouraged by the gradual publication of the critical edition of his writings and correspondence. Throughout this period scholars interested in learning about Bucer have begun their research using the bibliography of works by and about him that Robert Stupperich published in 1952. [1] Given the difficulties of doing bibliographic research both within and outside of Germany in the immediate post-war years, Stupperich's publication was a genuine contribution to Bucer scholarship. Nevertheless, those same difficulties meant that Stupperich's bibliography had some serious limitations. The bibliography of secondary works about Bucer has been updated twice in the intervening years (in 1976 and 1999) [2], but scholars have long awaited an analytical bibliography of the reformer's works that meets modern standards. Happily, that wait is now over, and this volume fills what was a significant void in Bucer studies.

The first part of the bibliography, devoted to Bucer's works, is divided into four sections: works published during the reformer's lifetime (from the earliest publication in 1523 to his death in 1551), works published after his death up through 2004, a short section of works that have been attributed to Bucer but whose authorship is uncertain, and published letters by Bucer. One important difference in scope between the older bibliography by Stupperich and this new bibliography is the inclusion in the latter of a number of Bucer's works, including translations, published outside of the Holy Roman Empire. Many of these translations are held in non-German libraries that Stupperich was unable to consult. The addition of these works has increased the size of this bibliography over the earlier one by about one-third.

The bibliographical entries include a complete description of the title page, the work's size and pagination or foliation, and citations of standard bibliographical reference works where the work is also listed. Cross-references for each entry assist readers looking for earlier and/or later editions of works published more than once. The editor warns in the foreword that the list of holding libraries for each entry is not necessarily complete and therefore not a reliable guide to the rarity of a specific imprint; still, the fact that so many libraries were consulted (450 libraries in 23 countries) makes this a very useful reference tool for anyone looking for copies of these imprints.

The section on dubiosa consists chiefly of editions of two early Reformation pamphlets, Gesprechbüchlein neüw Karsthans and Ain schöner dialogus und gesprech zwischen eim Pfarrer und eim Schulthaiß. Both works were published in the first volume of Martin Bucers Deutsche Schriften, but even at that time Bucer's authorship was questioned. The section of printed letters contains only those written by Bucer; it is therefore not a complete list of the reformer's correspondence. Since the critical edition of Bucer's correspondence extends only to mid-1531, this section is particularly important for those interested in Bucer's later career.

The second part of the bibliography lists works about Bucer published between 1526-2002. It too is about one-third again as long as the listing of secondary works in all three earlier bibliographies put together. Many of the additions to this bibliography are publications contemporary to Bucer or polemical works from the sixteenth and seventeenth centuries that refer to him. Taken together with the list of Bucer's works published after his death, they give a more precise picture of Bucer's continuing influence into the later sixteenth century than do the earlier bibliographies.

Over two-thirds of the slightly more than 2500 entries in this part have been published since the appearance of the first volume of Bucers Deutsche Schriften in 1960, an indication of the importance of the critical edition for Bucer research. The works listed range from typed theses to entries in biographical dictionaries to major works focusing on Bucer; the entries for the latter also give citations for reviews of those works. Virtually all of the works cited are in German, French, English, or Dutch, but the places of publication extend outside of Europe and North America to include Korea, Japan, and South Africa. The index of personal names is quite detailed, including every author or editor cited in the bibliography, from Bucer's contemporaries to current scholars. There are no indices for either subject or place, which is regrettable, given the broad array of topics Bucer addressed in his own works as well as his influence throughout Germany and beyond.

To quibble about such minor omissions seems petty, though, especially when compared to the benefit this volume will bring for future research. Production of such a fine research tool is not cheap, and the profits non-existent. Both the Deutsche Forschungsgemeinschaft and the Heidelberger Akademie der Wissenschaften therefore deserve special recognition for supporting the work on this bibliography.