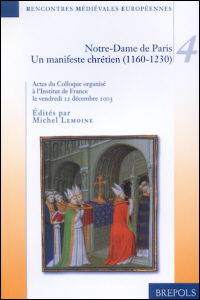 Any creative work is in large part a reflection of its own time; a response to contemporary ideas and events. This is the premise the authors set out to examine in the collection of essays on Notre-Dame de Paris edited by Michel Lemoine. Like the preceding three volumes in the series, this collection aims at interdisciplinarity in its approach to the topic, covering such areas as liturgy, music, and philosophy, as well as the building itself and its patron, the bishop of Paris, Maurice de Sully. The multidisciplined structure of the papers follows a recent trend in the investigation of medieval works of art which allows for a fuller and more complete understanding of a work within a broader contextual framework, rather than simply as points along a predetermined line of stylistic development. [1] The cathedral of Paris was constructed during an exciting period of transition both architecturally and theologically and as such is a rich topic for interdisciplinary examination. Though studies on the building are numerous, few consider the totality of the monument, as a product of its time, influenced by current trends in thinking, politics, religion and popular culture. [2] This volume, then, is a welcomed attempt at just such a study.

The anthology begins with an essay by Alain Michel on the liturgy and theology of the Middle Ages in which he summarizes medieval liturgical thinking and practice. His discussion is centered around William Durandus' Rationale divinorum officiorum, written in 1286. While there is no question that this important treatise played a major role in the formulation of late medieval liturgical practice, it postdates the main construction campaign of the cathedral by a good half century. Although this may seem like a minor point, major changes in the liturgy and the organization of interior space as a response to those changes had already taken place within that fifty year time-frame. [3]

Following this essay is Jean Longère's overview of Maurice de Sully and his role as bishop and preacher in late twelfth-century Paris. This is one of the stronger essays in the collection in that it deals directly with the patron of the building and his connection to the changes, both ideological and physical, that were making their mark on Paris toward the end of the century. Among the themes he examines is the restructuring of the diocese of Paris through the addition of numerous parish churches which would ultimately affect the role of the cathedral itself. No longer having to serve parochial duty, the cathedral could now be reserved as a unique and significantly more important space. Longère also covers Maurice de Sully's sermons which appear to be directed ad populum - to the public. Alain Erlande-Brandenburg briefly expands on this in his examination of Maurice de Sully's grand design, concluding that Sully was largely responsible for the arrangement of spaces within the cathedral, such as the separation of the choir from the rest of the space via a low enclosure which reflected the involvement with the public explicit in his sermons. The main body of his essay, however, is dedicated to the physical restructuring of the Ile-de-la-Cité: the removal of the fourth century wall which allowed the new cathedral to be moved slightly to the east of the island, the relocation of the Hôtel-Dieu to the southwest of the cathedral and the addition of the Rue Neuve which created a direct connection between the cathedral and the town. In short, the majority of Erlande-Brandenburg's essay is essentially a concise synthesis of the first three chapters of his book on Notre-Dame. [4]

Switching to the topic of music, Olivier Cullin discusses what he considers to be the paradox in the music associated with Notre-Dame. In this essay, he raises questions about the "school of Notre-Dame" itself (essentially Léonin and Pérotin), based on the treatise of Anonymous IV and through the examination of the polyphony associated with the so-called school. He also questions whether the organum of Notre-Dame was developed to inspire the general lay congregation, as has been posited by other scholars of music, or whether the music, which he claims was localized in the reserved space of the sanctuary, was intended first and foremost for clerical ears. He briefly concludes, however, by countering his own argument in stating that it is possible to consider the use of the polyphonic organum in relation to the pastoral role of the cathedral as seen, for example, in the iconography of its sculpted portals which essentially reach out to the public.

The final two essays of the volume focus on the abbey of Saint-Victor. Michel Lemoine's consideration of the abbey of Saint-Victor as a reflection of spiritual renewal summarizes the abbey's connection with some of the more important scholars of the twelfth and early thirteenth centuries, Abelard, Anselm of Laon, and Peter Lombard, to name a few. He then goes on to single out some of the precise connections between the Victorines and the personalities associated with the new liturgical expressions of the time. In so doing, he focuses much of his discussion on Hugh of Saint-Victor and his relationship with contemporary scholars, as well as his own writing. In an effort to draw a connection between Hugh and the Victorines to Notre-Dame, he highlights the architectural symbolism in De sacramentis and the Didsacalion's reference to the mechanical arts, though cautioning the reader that these should not be taken as direct influences. In Francoise Gasparri's exegesis on Godfrey of Saint-Victor's work, the Fons philosophie and his neoplatonic treatise, Microcosmus, she introduces the reader to the complexities of Godfrey's intellectual thinking. As rich a subject as this is, it is difficult to grasp the relevance of these works to the topic in question, beyond a general reflection of current intellectual modes of thinking in the broadest of terms. In a weak attempt to relate Godfrey's work to the cathedral of Notre-Dame, she concludes by reminding the reader that Godfrey was a product of Saint-Victor, one of the important intellectual centers of the time, which was located in close proximity to the cathedral. However, as Gasparri herself states, Microcosmus was not written within the intellectual milieu of the Victorine abbey, nor was it widely known, thus it would have wielded little intellectual influence at that time. [5]

On their own, the essays are interesting, though for the most part they add little to the current body of scholarship on late twelfth- and early thirteenth-century liturgical architecture or thought. They tend instead to be a summation of the current state of knowledge on the topic. As such, the volume's strongest contribution is in gathering the vast scholarship on the subject into a concise and manageable format. Students and scholars will find the book useful as a point of departure for future studies on the cathedral and its place in the intellectual and physical landscape of Paris. Unfortunately, where the book falls short, is in its stated ambition of examining prevailing trends in religious and philosophical thinking and making the exciting and complex connections between them and the very fabric of the cathedral itself as a physical manifestation of those ideas. This is as much due to the ambiguity of the theme, Notre-Dame as an expression of Christianity, as to the format of the book itself, a collection of diverse papers on a vast topic that lacks an overarching essay to connect them all in relation to one another and the theme of the book. It is left to the reader to make these connections him / herself.

[2] One notable exception is Michael T. Davis Splendor and peril: the cathedral of Paris, 1290-1350, in: Art Bulletin 80 (March 1998), 34-66, though his investigation is limited to the final phase of construction and the chevet of the building.

[3] One of the most important liturgical changes was the addition of the jubé which visually separated the laity from the priests, necessitating modifications to the performance of the mass, such as the ringing of the bell to signal the point of transubstantiation which could no longer be viewed by the public.

[5] In fact, it was one of the last of the great neoplatonic treatises, influenced in large part by the intellectuals of the Chartrain tradition, such as William of Conches and Gilbert de la Porrée.