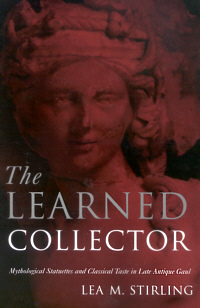 This book, a revised and expanded version of the author's Ph.D. thesis from 1994, is divided into seven chapters which, in addition to an introduction and a conclusion, address questions of methodology, villas and their contents, style and chronology, paideia, and learned collectors across the empire. In recent years late antique mythological sculpture (Idealplastik) has been treated in monographs by Niels Hannestad and Marianne Bergmann [1] and in many articles, including several by Lea Stirling herself. In these as here Stirling's main focus is on marble statuettes in Southwest Gaul.

The first chapter (1-14) outlines the content of the book. Chapter 2 (15-28) discusses the possibilities for interpreting find circumstances and how to judge the nature of the material. If there is no clear proof for a religious function, Stirling soundly suggests we may assume that the mythological statuary served as decoration (28). Chapter 3, "Late Antique Villas in Southwest Gaul and Their Sculptural Collections" (29-90), forms the core of the book. Here the author presents the finds from half a dozen villas. The situation is hampered by the fact that at least the three most famous collections of late antique sculpture from this region present serious problems: "The architecture at Saint-Georges-de-Montagne is scarcely recorded; there is significant debate over the formation, use, and dating of the enormous Chiragan assemblage; and at Montmaurin there is dispute over the chronology of the villa [2], whose sculpture is also highly fragmentary" (29). Finds from other sites, La-Garenne-de-Nérac (largely covered over), Castelculier (mostly lost) and Séviac (only one late statuette), add some evidence for mythological statuary in private contexts. Since only the largest and most luxurious villas, those which also had floor mosaics, possessed sculpture, this was obviously a status symbol (70). No statuary has been found in situ (79), and this makes it particularly hard to reconstruct the original setting. It is a reasonable assumption, however, that the sculpture was displayed for maximum effect and visibility.

The most important Gallic collection is the one unearthed in various campaigns during the nineteenth century at Chiragan near Toulouse. More than a hundred pieces, comprising many imperial (chiefly second century) and private portraits and mythological sculpture, were found mainly in pits. Taking her point of departure in the excavation reports, Stirling tries to make sense of this assemblage (49-62). Unfortunately, there are no secure chronological criteria. Like all Idealplastik, this is traditional in style and dating is difficult. Whereas Bergmann and Hannestad propose fourth century Aphrodisian workshops for the large Heracles reliefs and tondi of single divinities, Stirling has some reservations (58). Based on autopsy the reviewer inclines towards a third century date for the reliefs and the tondi. It is equally hard to accept that all this material formed the decor of a single private villa. In view of Chiragan's location near the Garonne river, one might think in terms of trade - is it perhaps possible to see the location as a distribution centre for sculpture? [2] However, too many pieces are missing to solve this puzzle.

In Chapter 4, "Issues of Style, Chronology, and Origins" (91-137), the approach is rather conventional: stylistic analysis, studying facial features, dress folds and other traits. One group of Idealplastik used for comparison is dated epigraphically to AD 389 and comes from a Mithraeum at Sidon; and other works called into evidence are also mainly datable to the Theodosian period. The author therefore assigns a late fourth- to early fifth-century date to most of the Gallic statuettes. However, due to the conservative nature of the genre, it is difficult to ascertain whether a given work was made, say, in ca. AD 360 or 390. A highly problematic case are the statues produced by Aphrodisian sculptors and found on the Esquiline Hill in Rome, now in Copenhagen (123-125). Because of their life size they fall outside the main theme of the book, but they are hard to avoid, as they are crucial for the discussion of the genre. The date of the Esquiline group is hotly debated, some opting for the second, others (e.g. Bergmann and Hannestad) for the fourth century AD. The latter date seems to be supported by epigraphical evidence. The presentation of these statues, like Stirling's consideration of the large scale sculpture from Chiragan and of that from the equally problematic site of Silahtaraga near Constantinople (214), shows that it is difficult to concentrate on statuettes alone at the expense of statues. Was there any fundamental difference of meaning between a statuette and a statue, or was it simply a matter of size, a question of economics, rather than one of function? Or, would it be possible to use size as a chronological criterion and make a case for large scale sculpture no longer being produced in the late fourth century? As it is, the reader is vexed by the circumstance that the author professes to deal with statuettes, but repeatedly, and unavoidably, turns to large scale sculpture as well (chaps. 4, 5, 6). Since many Gallic sites have yielded both large and small scale Idealplastik, as well as portraiture and bronze statuary (84), the situation is obviously complex.

As the late statuettes have but little in common with the sarcophagi from Arles and Marseilles, the author argues they were not locally made (115). It is worth noting, however, that "scientific testing has not been carried out on the marble of any of the late mythological sculptures found in France" (118). On stylistic and technical grounds Stirling associates the Idealplastik found in Gallic villas with eastern manufactures. She thus finds some stylistic correspondences at Ephesos, Dokimeion and Aphrodisias, but the closest comparisons come from Constantinople (127). Her conclusion is that the stylistic characteristics of the Gallic statuettes point to Asia Minor (129).

Turning from the archaeological and art historical to the literary evidence, Chapter 5, "Paideia and the World of Ausonius of Bordeaux: The Social Environment of Late Mythological Statuary" (138-164), offers some interesting glimpses into the educational system and the spiritual climate of late antique Gaul. Stirling examines various literary sources pertaining to the visual arts. For instance, Ausonius, the tutor of the young emperor Gratian, wrote a poem on a statue of Liber Pater which he had in his villa. Stirling points to the importance of rhetoric and a classical education in late antiquity, and claims that the appreciation for classicizing literary styles "may well have fostered a concomitant appreciation for classicizing contemporary artwork, such as late mythological statuettes" (148).

Chapter 6, "Learned Collectors across the Empire" (165-227), is the longest part of the book. It tries to compare the finds from France with collections or single pieces of statuary from the Empire at large. Stirling surveys many sites with sculptural assemblages in Italy, Spain, Africa, Britain, the Danube region, Greece, Cyprus, Constantinople, Asia Minor etc. The author does not restrict herself to fourth century statuettes but "embraces a wide chronological span" (165). This chapter (which perhaps brings together too much disparate material) confirms that mythological sculpture, both newly manufactured pieces and especially old ones, played an important role in domestic decor well into late antiquity. It is often uncertain whether the Idealplastik was contemporary with the late building it decorated, or whether it was reused. One question remains to be posed: did it matter to the collector, learned or not, whether the sculptures were old or new? Given the choice would he or she have preferred antiques to contemporary art works - or was it the other way round?

In her brief conclusion the author sums up her results and underlines the importance of paideia and classicizing taste (228-232). The notes and bibliography contain ample references (233-305). Ground-plans of villas and photos of less familiar works are particularly useful.

Stirling's book is a comprehensive account of mythological statuary and the contexts in which it appeared. Archaeological material from many sites, not only in France, is collected and presented along with various other data in an attempt to elucidate the use and function of small scale Idealplastik. The author presents a late antique cultural milieu in which the classical heritage was highly appreciated. Mythological statuary can thus be seen as an index for the life style of the late antique elites.