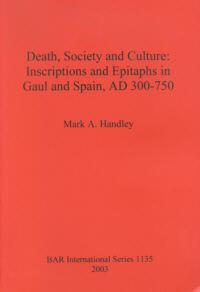 Handley's book is a series of loosely-linked studies on the epigraphic corpus of Spain and Gaul in late antiquity. Those familiar with the author's articles on the same material will know how well he controls it. Here, at last, we have a complete statement of the evidence on which Handley has based his sometimes very significant conclusions. Handley has worked from a total of 4.198 inscriptions - 1.257 from Spain, 2.941 from Gaul. He makes lavish use of comparanda, with comprehensive databases of inscriptions from Britain and Illyricum, and large but not exhaustive samples from North Africa and Italy (excluding Rome). As far as this reviewer can tell, Handley has missed nothing of any significance for Spain up to publication year 2001, and one should presume that the coverage of Gaul is equally thorough.

The book is dense with very specialized discussions and a short review can do no more than pick out some significant themes. In the second chapter, on the Christian language of commemoration, and the ninth, on literacy, Handley is laudably aware of the role of inscriptions not as an end in itself, but rather as part of a ritual process surrounding the deposition and commemoration of the dead. Echoing both Greg Woolf's studies of the epigraphic habit in the Early Empire, and the work of early medievalists like Bonnie Effros on funerary display [1], Handley reads the setting up of inscriptions as a means of establishing a permanent display of power or status in times of social instability - a bid for permanence at a time when traditional means of maintaining status were challenged by the instability of historical events. Because of this social function, Handley argues that inscriptions cannot be used as a simple correlative for the literacy of a population. Instead, the epigraphic habit is evidence of a cultural outlook that understood and valued the power of the inscribed word, even if its precise verbal meaning could not be parsed by every viewer. Although the argument as a whole is plausible - both for the first and second centuries, and for Handley's fifth and sixth, it fails to address a significant impediment: if inscribing words is a strategy for asserting status across the break between generations in unstable times, why should the lowest ebb of the epigraphic habit across the Latin West have come in the last four decades of the third century and the first two or three of the fourth, a deeply disturbing - indeed transformative - phase in Roman history?

Elsewhere, though, Handley's book provides thorough and convincing answers to the questions it raises, for instance by taking on the economic and socio-historical problem of how, where and why gravestones were produced. Handley argues that gravestones were generally produced at dedicated workshops attached to individual cemeteries; that partially completed stones were usually kept on hand so that only the details of the deceased needed to be added; and that, very often, distinct groups of inscriptions from well-documented sites like St. Eucharius of Trier should be understood as stylistic variations available to workers in, and patrons of, a single workshop, rather than as the product of different ateliers. For each of these conclusions, Handley musters persuasive evidence both from letter forms and from the available peri-epigraphic data. As importantly, Handley shows that the existence of stylistic uniformity within groups of inscriptions requires us to discard the old myth of late antique epigraphic incompetence: if stonecutters could control the shape and style of their products with some consistency - as they obviously could - and yet were not using classical display capitals, incapacity cannot be the explanation. Rather, they and the communities they served did not want or need the linear regularity of classical epigraphy. Why that should have been the case is another question altogether, and Handley's attempt to connect smaller and less regular lettering with the familiar humility topos of early Christian literature does not convince.

Chapter four discusses the social status of commemorands in Handley's corpus, and will provide a useful mine of data for scholars working on totally unconnected fields. By tabulating occupational data and mustering what little evidence exists for the actual cost of having an inscription carved, Handley shows that in the early middle ages, when burial sodalitates and other such support networks had ceased to exist, inscription was very much confined to higher wealth groups. Both in Gaul, and perhaps even more so in Spain, inscribed commemoration was a restricted activity, which on the one hand reflected social status, and on the other involved a conscious claim of status for the dead person, and as a consequence for the survivors who set up the commemoration. Handley never seeks to hide the fact that less than a quarter - 893 out of more than 4.000 - of his inscriptions list the occupation of the deceased. But he rejects the view that the remaining three quarters of his sample represent only people of low social status, and conjectures that they belong to the sort of sub-elite; they were, in other words, below the governing elites of church and state, whose funerary ritual they could mimic, but above that of the purely producing sectors of society who have left little inscribed trace.

Similarly useful results emerge from the chapter on age and gender distribution of commemorands. Many of Handley's conclusions are not strikingly novel - that very young children are hugely under-represented in commemoration, or that women above child-bearing age are commemorated much less frequently than women between 16 and 40 - but they rest on a database that has not been exploited systematically in the past. More strikingly, Handley's data suggest both a widespread ignorance of age, and a widespread practice of age-rounding on epitaphs that will have serious repercussions on analysis of family structures. These phenomena do not, however, mean that age was unimportant to Spanish or Gallic societies in this period. Instead, Handley proposes to distinguish between the biological age of commemorands, which was rarely known precisely, and their social age, which was very important, as comparison with both literary and normative sources demonstrates. A concern for social, rather than strictly biological age will have made for pressure to commemorate people of certain social ages, but also to associate people with prestigious social ages that they might or might not have been able to authentically claim. The statistical basis for these conclusions is quite strong - more compelling than that for social status / occupation - and especially for Gaul tends to confirm the evidence for the deposition of grave goods.

Handley's chapter seven, on the reckoning of time by days, months and years, will be the most familiar section of the book for readers of his earlier work. The data sets used here are considerably fuller than those in earlier articles and all citations of his findings should henceforth come from this work. Among his important findings is the absence of any strong desire to Christianize the naming of the days of the week. The complete tabulation of Gallic and Spanish evidence for the transition from the Roman kalends-nones-ides system of reckoning months to that of cumulative counting is very useful, because it demonstrates that Spain and Gaul came much later to the new cumulative reckoning than did Italy and North Africa, where there are some fourth-century, and quite a lot of fifth-century examples. More importantly, the practice cannot be regarded as Gallic, as sometimes maintained, and certainly was never widespread in epitaphs and gravestones by comparison with traditional Roman reckoning, however poorly executed. Handley also reprises his discussion of consular dating - rare for most of Gaul, very rare in Spain outside Tarragona, but commonplace in Burgundy from the later fifth century onwards. Not only do epitaphs and other inscriptions use consular dating, but so too do literary sources like the chronicle of Marius of Avenches. This preference for consular dating is not a holdover from the high empire, because almost no examples of consular dating are known from before the later fifth century. It is instead an authentic characteristic of the Burgundian kingdom that was put on a permanent footing by Gundobad in the 470s. For reasons that remain for others to explore, the Burgundian kingdom used consular dates as an official system of reckoning. Before long, consular dating became a major indicator of Burgundian identity: it was very slow to die off after the extinction of the Burgundian kingdom in 534 and reaches as far as the 102nd postconsulate of Basilius, i.e. 642. Given that, in 642, Burgundy had been a Frankish kingdom for more than a hundred years, the local patriotism evinced here is significant.

As his unwillingness to draw causal conclusions about the Burgundian data suggest, Handley is consistently cautious about putting more interpretative weight on his evidentiary base than it can bear. This is particularly the case for questions of actual demography, for instance, typical age at marriage, or seasonal mortality. For many questions, Handley has given his readers a point of access to an invaluable corpus of material, while leaving open what sort of use they might put it to. The one real limit on the book's utility is its production. It is very badly proofread. For all that, this is an important study that is unlikely to be replaced in the foreseeable future. It collects a wealth of data rarely approached by anyone other than professional epigraphers. Its bibliographies are comprehensive and its addenda to PLRE invaluable. Although the book does not make comprehensive or readily summarized arguments, it is a tool that will repay repeated by consultation by those working on the period it covers, not just in Gaul and Spain, but in the Latin West as a whole.

[1] G. Woolf: Monumental Writing and the Expansion of Roman Society in the Early Empire, in: Journal of Roman Studies 86 (1996), 22-39; B. Effros: Caring for Body and Soul. Burial and the Afterlife in the Merovingian World, University Park 2002.