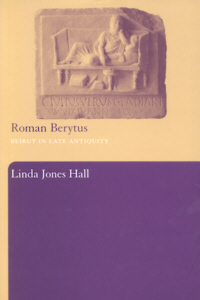 In Antiquity Beirut stood out from its neighbours and rivals. Roman Beirut was the first and remained one of the very few colonies of Roman veterans in the Near East, while in Late Antiquity it was celebrated as a centre of learning and legal studies. Prominent in written sources, it has long been overlooked by modern research. Recent years have seen both extensive fieldwork undertaken in the downtown area, starting to yield a more complete picture of Late Antique Beirut, and a renewed interest of modern scholarship in this polis rhomaikotera, the most Roman city in the Greek East.

"The first comprehensive study of Roman Berytus", as Hall's book presents itself, is therefore highly welcomed. It is organised in eleven chapters of unequal length (1-259), plus four appendices with chronological tables of emperors, provincial governors, bishops and law professors, and an overview of the coinage of Beirut. Although the bibliography covers an impressive 61 pages, English titles have been vastly favoured (c. 80%) over all other languages, an unjustified imbalance in view of the long and continuing contribution of francophone scholarship in this area.

The main goal of the study is to offer a "reconstruction of the self-identification of the people of Berytus" (1) by "listening for self-expression by the members of that society" (1) with regard to ethnic, professional and religious affiliations. As Hall explains, her study only examines the written, mostly literary, evidence including church histories and pilgrims' accounts. But the reasons for this restriction remain unclear: "I have chosen to emphasize the textual and epigraphic evidence over the archaeological evidence because this study focuses on the written self-presentation of the people of Berytus in Late Antiquity" (9). This circular argument merely restates the premise. In fact, it is difficult to think of a plausible justification for this omission, since many of the topics touched upon would have greatly profited from a synthesis of both written and archaeological evidence. Visual evidence is only presented in the form of 10 bw photographs, which are furthermore not referred to in the text (e.g. the inscription discussed on page 236 is fig. 6; that on page 243 is fig. 10 and frontispiece).

The first six chapters contain brief chronological surveys of the city's history under various thematic aspects, economy, urban layout, administration. Considering the poverty of written sources on Beirut in Roman imperial times, it is understandable that the focus should be on the third to sixth centuries. The subtitle of the book in fact matches its content better than the title. Chapter 5 is entitled "the built environment of Berytus", an overview of the known public architecture of the city, including the colonnaded main streets, amphitheatre and Herodian basilica, but leaving aside the baths and fora. Here the omission of archaeological evidence makes itself most sorely felt. To study Roman Beirut based on written sources is of course feasible, but then why venture into an exposé on urban layout, which has to remain necessarily incomplete? Excavation reports are duly listed (13 n. 72 and 78 n. 31), but hardly employed. It is surprising to find that in support of this chapter, with sub-headings such as "The physical structures of Late Antique Berytus", the book does not contain a single map of Beirut. Hall enumerates attested church buildings, namely Anastasia, Theotokos, St. Judas and St. Stephen (66-67), but without placing them into any physical context. Vivid first-hand accounts of the devastating earthquake in AD 551 (70-76) are quoted in full, but the chapter concludes with open-ended speculations on the extent of the damage and the reconstruction of Beirut, without taking note of the progress of the archaeological enquiry on these questions. There is indeed plenty of evidence that "seems to suggest that Berytus did not regain its previous affluence" (70). And it is not true that "we lack the evidence [...] how the rebuilt city looked [sic]" (76), but rather that it has to be sought elsewhere than in written accounts.

Chapter 6 is a sober and factually correct summary on Roman governors of Syria viz. Phoenicia in chronological fashion, but 45 pages are too ample a space given to a subject with no direct bearing on the main thrust of the book. Furthermore, the same information is repeated in tabular form in Appendices I and II (260-79).

Chapters 7-8 trace the transformation of Beirut from pagan to Christian city and play a key role in this study. The main sources employed are three accounts of conversions in Beirut at the end of the fifth century, those of Severus and Matrona and the proselytising mission of Rabulas. They document the growing power of the church and the Christian community and the changing attitudes (read 'identity') of the population towards the divine world, but they also demonstrate the tenacity of pagan practice, which, as Hall suggests, may have been regarded as service to the 'national' gods. But the author shows too much restraint from dissecting and analysing the sources; for instance, so much could be made of the lengthy supplications of Alexandra on a fifth-century silver amulet (183-84), a professed Christian invoking 32 divine forces with exotic names. Chapter 9 attests the lasting esteem for traditional education and rhetoric; chapter 10 rightly points out the surprising frequency with which individuals would note their occupations on epitaphs, even if these certainly had no prestige (e.g. 'collector of murex shells' 234-36).

Throughout the book the text occasionally threatens to dissolve into a loose assemblage of citations with no obvious coherence or revelations of "self-identity" by Beiruty people. Often they convey concise miniature portraits, but one misses the hand of the modern scholar to pull these threads together to produce a coherent image of the inner working of this city, the urban community at large and the interplay of its many sub-groups. The study suffers from a fundamental lack of questions and problems and hence, ultimately, a lack of arguments. Hence the conclusions are rather vague and reveal the fact that no substantially new insights have been gained; "intellectual prowess was esteemed in Berytus"; "Berytus was a city that valued its 'multi-cultural' confluence" (257).

With regard to the leitmotif of identities, one cannot help but notice the black and white categorisation, which Hall applies to the individuals encountered in the sources. In her exploration of 'identity' (almost always in the singular), she does not take into account the frequent occurrence of multiple identities, i.e. the fact that the same person may properly identify himself as Phoenician, Christian and a purple-dyer at the same time. A precise examination of this phenomenon would have yielded many answers from our sources: In what contexts are certain self-ascriptions used? What may be the factors triggering the choice for either this or that category in that particular situation? Where and for what purpose is Latin used as opposed to Greek? What percentage of Semitic names is attested in inscriptions? What is their relation to citizens with tria nomina in terms of numbers and social status?

An ominous "Phoenician" identity appears very frequently in this work. But one would need to start by asking what the term "Phoenician" may have signified to people labelling themselves as such. Is it really the case that "Phoenician identity [...] gained 'superior' status to Syrian identity" (256)? Both terms remain enigmatic to us, but considering the fact that a thoroughly 'Syrian' town such as Emesa could define itself as Phoenician seems to suggests that the meaning of the term is far from self-obvious.

As Hall rightly points out, one of the main elements in forging a (cultural, ethnic) identity is language. But in linguistic questions major shortcomings crop up. It is of course not "the Punic language", which is "not attested as surviving by inscriptional evidence past the second century AD" (133), but Phoenician. Likewise, it is highly unlikely that "Hebrew declined as a spoken language at this same time" (133), but rather that it had long before yielded to Western Aramaic as a spoken language. Aramaic: oddly, the lingua franca of the Near East, mother tongue to the vast majority of its inhabitants, hardly appears in Hall's equations; languages under-represented in written sources are treated as non-existent, even though Theodoret explicitly reminds us that the Phoinikes of his day spoke Aramaic (Questiones in Librum Judicum 19). Western Aramaic and not Syriac (101; 177 with n. 101; 256) is what our sources refer to as "the language of the Syroi". But its speakers remain invisible in our sources because of the very nature of these documents: before the triumph of Christianity, literature and epigraphy were singularly Graeco-Roman practices of cultural expressions on the Levantine shores.

On the whole, Hall's book offers a large spectrum of Late Antique sources and a meticulous collection of recent scholarship, presented in a structured and easily accessible manner. It is only unfortunate that the publisher still maintains the inconvenient reference system of chapter endnotes with abbreviations, requiring a hunt across at least two places in the volume to track down an entry. The valuable 'raw data' presented in this book documents the lasting importance and uniqueness of Beirut in the early Christian world, but it is mostly left to speak for itself rather than being analysed and interpreted. The "cultural implications of the city's Greek, Roman and then Syro-Phoenician heritage" (blurb) still await exploration.