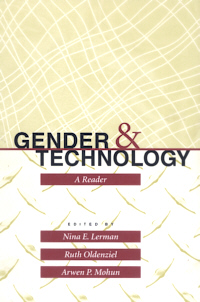 Science and Technology Studies have exhibited an interesting trend in focusing on boundaries and boundary objects. Disciplinary, epistemological, ethical, cultural or otherwise, boundaries have often occupied the interest of STS scholars. Defining, stretching, blurring, shifting, and crossing are some of the ways scholars get engaged with boundaries. Yet in Gender and Technology: A Reader Lerman, Oldenziel, and Mohun are willing this time to interrogate a boundary. The metaphor captured in an interesting subtitle at the introduction of the book - interrogating boundaries - serves as a resourceful, novel way to present an old, well-discussed topic: the relationship between gender and technology. As the authors explain "the articles in this book explore technology through the lens of gender and gender through the lens of technology, and they do so in historical perspective" (2). The reciprocal relationship of the two categories is discussed in the specific historical and cultural context of North America from 1850 to 1950 while the authors pay considerable attention to technological changes and the system of industrial capitalism.

The book consists of a total of fourteen articles which previously appeared in important refereed journals such as Technology and Culture, IEEE Technology and Society Magazine, and Signs and also in the book Gender and Archaeology edited by Rita Wright. Lerman, Oldenziel and Mohun have skillfully grouped these papers under two main topics: the "Entwined Categories" and the "Industrial Junctions", each of which is split into two parts, showing first, how gender and technology are co-constructed and second, how gender ideologies and industrialization has shaped each other. The original historiographical essay, "The Shoulders We Stand On / The View From Here", written in 1997 as an introduction to the Technology and Culture special issue on gender and technology, has been added to the end of the collection, bringing up to date its bibliographical references. The book is mainly intended as a teaching tool and the authors have even provided useful suggestions to class instructors (451-453). However, a reasonable question arises: does the collection bring anything new to the readers of history of technology and women's studies when most of the material has already appeared elsewhere? The aim of this review is not to present individual articles of the book as these have already been previously evaluated but to investigate the originality of the collection.

Facing the above challenge, Lerman, Oldenziel and Mohun put their original metaphor to work. By "interrogating boundaries" the editors succeed to bring front and center important and unnoticed aspects of already known material. The virtue of the collection is in the ways gender and technology boundaries are discussed by focusing on diverse practices and materials and thus they highlight differences as well as persistent similarities. By rigorously defining the two main categories of the volume, the editors sort things out at the outset. Approaching technology as "people's ways of making and doing things" (2) they are able to include in this volume both materials and processes: brasseries, cars, vibrators, computers, machines and bodies as well as meatpacking and cigar-making. Defining gender not only as "a way to sort people" but also as "a way to assign power in particular contexts" (4) they move further from the discussion about women's relation to technology and they embrace gender structures and institutions as well as the symbolic and representational ways that gender works. Furthermore, as they argue "treating both categories as constructed, rather than as natural or immutable facts, and treating them together, highlights the importance of human agency in understanding historical change and continuity" (6).

For example, Judith McGaw's opening article demonstrates at best that indeed technologies are socially constructed, they embody the perspectives of their creators, and moreover, that technological choice and knowledge are both pervasive. Through the examples of women's brasseries, closets, and cupboards she argues that feminine technologies - technologies associated with women by virtue of their biology - "disclose the system's fatal flaws" (31), as biology cannot be standardized. Going one step further, Rebecca Herzig examines the use of x-ray machines as medical tools for facial hair removal and demonstrates the pervasiveness of technology in relation not only to gender but also race. If feminine technologies matter because they make "private" and "biological" technologies visible, Oldenziel vets an all-boys technology such as the automobile, questioning the practices which actually name technology as masculine. Joining Oldenziel, Rachel Maines's study of the vibrator reminds us how gender ideologies shape technology and its uses.

Moving from objects to processes, a prosperous site to explore ways of gendering technologies is the new industrial workplaces at the turn of the 20th century. In "Cigarmaking" Patricia Cooper takes us to the cigar industry of the 1920s when the introduction of automatic cigar machinery forced the transformation of cigar making from handcraft to industrialized occupation and from a skilled craft for men to unskilled job for women. Similarly, the introduction of ENIAC, the first electronic computer, and the mechanization of the workplace in the 1950s, as Jennifer Light argues, made the women who programmed the machine invisible. Last but not least, the scientific transformation of dressmaking examined by Wendy Gamber, the development of gender patterns of work in meatpacking studied by Roger Horowitz, and the industrialization of laundry probed by Arwen Mohun, exemplify the fact that technology and gender are both about power: economic, social, and cultural.

Yet, the main argument of the book is that the categories of gender and technology are entwined; if gender constructs technology, technology constructs gender as well. The relation is reciprocal and therefore several articles in the collection illustrate the second part of the relation. Nina Lerman's focus on technical education of school children in mid-nineteenth century Philadelphia is actually a focus on the ways technical knowledge was offered to white men and barred from women, a focus on how gendered identities are constructed through technical education. Complimentary to Lerman's approach, Paul Edwards' discussion of computer technology and the military demonstrates why computers bear a strong association with masculinity, associated with the fact that the military is a social system and not just "a tool of statecraft" (186), which indeed can alter gender roles radically.

However, technology constructs gender not only in sites such as the factory, the workshop, and the office but also the home. As Carolyn Goldstein shows, in the early 20th century, utility companies and appliance manufacturers intruded into the household and tried to influence women's technological choices through a pool of home economists - professionally trained women who established a regular contact with homemakers and effectively played a mediating role between producers and consumers. Ronald Kline takes us to the American farmhouse of the 1930s to argue that a certain "progress ideology of technology" (394) significantly influenced home economists' interpretations of their data, concerning laborsaving household technologies, and blinded them towards overworked farm women. On another intersection between producers and consumers, Joy Parr's narrates the story of Canadian women in the 1950s that resisted automatic washing machines - effectively used in the United States - to replace their own older wringer machines. Highlighting the user's role in shaping technological use and design, all the above studies are situated on what Ruth Schwartz Cowan has called "the consumption junction" (360) - the intersection between production and consumption and their approach as a single process. In other words as Lerman, Oldenziel and Mohun maintain, these studies are about "the industrial junction" - the intersecting boundaries between home and work, production and consumption in industrialist capitalist society (206).

With no doubt, Gender and Technology: A Reader is an interesting anthology of some of the most important pieces of the American gender-technology literature. It is easily accessible to students with useful introductory notes in front of each article and challenging questions for both instructors and students. Furthermore, it can suit a variety of courses in science and technology studies and women's studies. Yet, considering this book from the perspective of a non-American scholar, the virtue of this collection could somewhat be considered as its flaw. The book is exclusively centered on the North American history of technology, ignoring works that emphasize different perspectives and different cultures. I will agree with Parr, quoting Christine Zmroczek, that, "If we want to understand women's experiences of technology, it is important to look closely enough to uncover the differences from country to country and culture to culture, even within Western capitalism" (331).