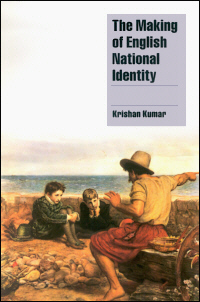 It is rare that a reviewer hails a book as a scholarly masterpiece while at the same time criticising the author for littering the text "with far too many references" and complaining about "a needless academicism". Yet this is what Bernard Crick does in his review of The Making of English National Identity. [1] His argument runs along the line that the subject of Krishan Kumar's book is too important to be left to the specialists. In this way, Crick's argument itself may be seen as an expression of English national identity that prefers common sense arguments with practical relevance over a detailed and 'over-scholarly' approach. With the dissolution of empire and the so called "Break-up of Britain" (Tom Nairn), lately evidenced in the new Scottish and Welsh parliaments, the foundations of this identity seem shaken to many. In a recent debate in the mailing-list H-Albion, Jasmin Johnson commented: "Perhaps the struggle that [the] English are having to overcome their guilt for the past and to accept their own national identity as something positive is best summed up in a badge [...] I saw recently which stated: 'English is ethnic too'". [2]

Kumar's argument in this discussion, to sum up 360 thoughtful pages, is that historically there was no English nationalism because there was, until comparatively recently, no need for it. English nationalism is seen as "the dog that did not bark" (175). Englishness and Britishness have been intermingled in such a way that what might otherwise have become English nationalism merged in a British and thus imperial sense of the nation. The sociologist Kumar here partly builds on Linda Colley's claim that a British national identity came into being in the eighteenth century. He sees the English as an imperial people that did not only dominate a worldwide empire, but also the British Isles. This made nationalism partly unnecessary (the English were already united under a common rule and strong enough to dominate their direct neighbours) and possibly dangerous (putting too much emphasis on who was in charge or claiming a too obvious superiority over the other peoples in the British Isles would risk a counter movement).

To make this point, Kumar even goes back to an analysis of what he calls the "first English empire", that is the conquest, colonisation, or anglicisation of the Welsh, Irish and Scottish during the Middle Ages. He does not, however, confuse this with English nationalism. While discussing different theories of nationalism, Kumar partially sides with the modernists (as opposed to the primordialists), who claim that nationalism came into being in the early nineteenth century. Kumar does not dismiss the existence of an earlier national identity and in his informed discussion of recent research rightly argues for "a degree of plasticity and variability in concepts of the nation, nationhood, and even nationalism" (30), but he also states that "nationalism is, by virtually universal consent, a nineteenth century invention" (22). Fortunately, Kumar does not seem to believe in the existence of such a "universal" consent, because he dedicates a major part of his book to an argument with those who object to it. His refutation of theories by scholar such as Liah Greenfield or Hans Kohn is indeed essential for his main argument: If he wants to show that by the time nationalism appeared as a powerful force on the European stage the English could use an already established Britishness because it suited their needs far better, then he has to prove that a sense of Britishness came first and not after the development of nationalism.

Kumar's confrontation with those speaking for an already established sense of nationhood in the 8th or nationalism in the sixteenth, seventeenth, or eighteenth centuries is especially useful because of the wide range of literature covered, expertly discussed and well documented. Kumar rightly points out that many of the claims result from a lack of clear definition and a confusion of the terms 'national identity' and 'nationalism' as well as from the desire to find the origin of such an important movement as nationalism in one's own favoured period. He argues on a general level (masses and elites in premodern societies remained distinct entities with a vastly different horizon, medieval religion was a strong transnational influence et cetera) as well as in a detailed refutation, for instance of Greenfield's claim that the English developed nationalism in the sixteenth century when the people supposedly got their share of sovereignty and democracy was born.

Kumar's style is entertaining and his arguments generally convincing. Yet those who would like to stick to their idea that there was some sort of nationalism before 1800 should keep in mind that Kumar is not generally working on the level of primary sources. This means that technically he has not proven that there was no nationalism, but rather that some of the most prominent exponents of such ideas should restructure their arguments. And despite the wide range of literature quoted even Kumar might consider improving his arguments in some cases, for instance when in a short paragraph he dismisses "any kind of German unity to be seriously contemplated" in the sixteenth century as "at odds with the thinking and policies of the empire" (91). He is of course right to point out that we should not expect proper nationalism from an entity such as the German empire, but fails to discuss or reference (or maybe even notice) such uniting influences as the propaganda against the Turks. Some other aspects of Kumar's critique might also be elaborated, for instance when he dismisses elements of nationalism in Elizabethan literature. He thinks it "permissible to speak of Elizabethan patriotism", but denies nationalism, even though he acknowledges that authors like Hakluyt or Drayton "seem to invoke, in a more populist and inclusive mode, the spirit of the nation" (117). Although Kumar's emphasis is right, it might nevertheless be useful to discuss such arguments in more detail, especially the case of Richard Hakluyt who explicitly made the English nation the focus of his work as an editor.

It also seems to me that in his argument for a British nationalism Kumar uses some of the arguments he earlier dispelled. In the sixteenth century religion is seen as a dividing force, pitting Catholics and Protestants against each other rather then uniting them. For the later Britishness, however, Kumar presents it as a unifying force, bringing together the different Protestant British peoples against Catholic Spain and France. This may very well be, but it does not explain why for the sixteenth and seventeenth centuries he explicitly sets Foxe's Book of Martyrs in an apocalyptic and internationalist context, whereas in a later, national, context he sees it among "the reminders of the heroic days of Protestantism" (162). Such minor points do not discredit his general argument, but it would have been stronger had he discussed more explicitly why elements that earlier might at best qualify for a national identity do now establish a British nationalism. This he does successfully when, in the penultimate chapter, he argues for a "moment of Englishness", the period around 1900, where he sees something like an English nationalism caused by a crisis of belief in the imperial mission, increasing economic competition and events like the Boer War. The last chapter deals with the problems that British and English national identities face today.

"The making of English national identity" is one of the most important recent contributions to the field of Englishness, Britishness and nationalism generally. Krishan Kumar ably summarises the state of scholarship, forcefully dispels some myths regarding nationalism and gives a fresh starting point for new research. One might not want to agree with his call for a new English nationalism that "might newborn show what a truly civic nationalism can look like" (273), which is how he ends his book. But if you are interested in any such topics, you will definitely have to read his book.