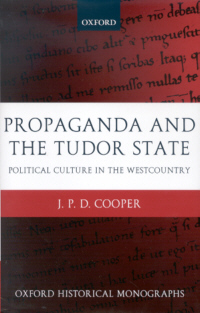 Propaganda and the Tudor State tackles the assumption that "Tudor society became less settled, and government less assured, the further one travelled away from London and into the Provinces" (2). Cooper emphasises instead "a complex and mutually beneficial relationship existed between westernmost shires and the crown, which was able to capitalize on the structures and symbols of regional difference" (2-3). Aiming to locate Devon and Cornwall "within England's national imagination, as well as its administrative and judicial framework" (3), Cooper acknowledges the influence of the methodology of the 'new' British history, although here the focus is on an English province rather than Ireland, Scotland and Wales.

The Tudor Westcountry is defined rather narrowly as the diocese of Exeter and principally the counties of Devon and Cornwall in the far south-western fringes of the country. This will surprise many in the field who have been accustomed to incorporating several other counties, or at least parts of them, in any definition of the Westcountry. This aside, Cooper's Westcountry area has long been considered a backwater in terms of its integration into a national social, religious or political framework. Despite the difficulties inherent in their remote geographical location and their isolation from the normal, direct and more formal means that Tudor governments employed to convey their political authority, Cooper nevertheless asserts Devon and Cornwall "still felt bound to the monarchy" (17) and indeed, were relatively conservative in their support for the state.

Throughout the book, the author is eager to emphasise the politics of stability over instability. Consequently, the 'crises' of the Cornish (1497) and Western rebellions (1548-9), are downplayed here as aberrations in the midst of a more rational and consenting political structure. Cooper begins by demonstrating the Westcountry's allegiance to the crown, studying the diligence with which churchwardens in the region received national news such as royal propaganda. Indeed, for Cooper, over the course of the Tudor period the parish church became the "principal focus of popular allegiance to the monarchy", evidenced by an increasing sensitivity and receptiveness to the culture of kingship displayed in both churchwarden's accounts and parish iconography (8, 26).

The persistence of the Cornish language in the Tudor period has often been used by historians to highlight the difficulties of political management in the region. However, Cooper dismisses the possibility that Cornish-language plays such as the Beunans Meriasek had any significant satirical political overtones during Henry VII's reign. Whether this play was quite as "popular" as Cooper makes out is debateable, and similarly it seems rather strained to suggest that such works were "a form of catechesis for the common man to whom the Latin gospel was incomprehensible" (81); a claim which seems at odds with the articles of the Western rebels of 1549 demanding a return to the Latin service. The focus of the play, we are told, is anyhow not political but religious, "written to convey some basic understanding of the Catholic faith". The "many other interesting insights" (82-3) that the play might offer us are not revealed and we are left with the titillating but rather frustrating proposal that the play "has more to do with the age of the saints than the age of the Tudors" (84).

The following three chapters, Cooper claims, present "a fresh picture of Tudor royal power as experienced in the shires" (87). The local impact of the Tudor treason laws, it is suggested, not only fostered a "climate of watchfulness and suspicion" that profoundly affected the local political equilibrium (9), but also handed the crown the necessary armoury to help enforce the Reformation (88). Much of this evidence, however, could be equally applied to areas outside the Westcountry, and there is little here to suggest that the region enjoyed a uniquely good or bad relationship with the crown. Rejecting any concept of a natural predisposition to rebellion, Cooper is at pains here to distinguish the Cornish experience of Tudor rule from that of other peripheral regions, such as Wales (108-9). Concurring with Robert Whiting's work, Cooper portrays the history of the south-west's Reformation as that of a crumbling traditional religion, unable and perhaps unwilling to withstand official attack, leaving widespread confusion and apathy, but ultimately obedience as its legacy (114).

Even the abolition of devotional pilgrimage and saints' days failed to provoke any significant reaction from Westcountry men and women (115-8). What signs of unrest there were in the 1530s was not motivated by national political issues but by a simple desire to preserve parish traditions. This lack of popular resistance is all the more remarkable given the highly individual popular religious culture of the Cornish parishes. In essence, Cooper insists, even when and where one might expect to find popular resistance, the Westcountry evidence presents relative compliance.

From a crown perspective the biggest threat to the stability of the region came not from within but from the threat of invasion. Unlike other peripheral regions, peace and stability in the Westcountry was achieved "by personalities rather than bureaucracy" (130). For Cooper the "effective administration of the shires depended more on the maturing relationship between crown and gentry than on the development of bureaucratic structures" described by Professor G.R. Elton in The Tudor Constitution (128). [1] Two traditionally 'notorious' cases of centre-local friction serve to illustrate the crucial role of individual Westcountry nobility and gentry in regional peace-keeping. Cooper's claims about the deleterious effects of the decline of local noble power on peace in the region are not however wholly convincing, and it remains unclear whether noble power (or its absence) significantly influenced proletarian politics.

The Westcountry's incongruous quantity of litigation has often been used to confirm the region's reputation for turbulent politics and lawlessness, but Cooper suggests this "might well be seen as an asset to the region, evidence of a special relationship with the crown as dispenser of justice" (136). As in other parts of the country, Cooper warns, the language employed by litigants eager to get their cases into court should not be taken at face-value. Other widely used avenues of assessing regional lawlessness, such as an examination of King's Bench court files, are however absent from this study and, significantly, others have used these very same sources to highlight the 'wildness' of the Westcountry region. [2] Cooper's conclusion that the region was "closely and quietly governed" therefore, is far from incontrovertible (145).

Cooper's work on the role of the Duchy of Cornwall and the Cornish Stannaries in fostering local affiliation with the crown is an interesting and largely neglected approach. These two institutions represented the "two most significant routes by which the authority of the Tudor monarchy was mediated in Cornwall and Devon" (208) and thus help to explain how the relative peace and stability of the region was achieved. The Duchy of Cornwall held significant financial, political and social sway in the region, helping to "increase the bond between the people of the south-west and the Tudor crown" (10). The stannaries (tin-producing areas), likewise according to Cooper, "profoundly influenced the manner in which the crown was perceived by ordinary people in the Tudor south-west" (187). Cooper uses links such as this to suggest that the localities were as important in fomenting the political dynamic as the centre. But as is the case when the author suggests that the disproportionate parliamentary representation of Cornwall contributed to a "successful dialogue of power between crown and periphery" (187), there is a lack of tangible evidence exemplifying exactly what that dialogue was or what was 'political' about the dynamic Cooper is referring to. If the impulse for political representation came from a local community eager to participate more fully in the Tudor state and if that representation was a "tremendous boon to a community" opening "doors to the private legislation that could secure central funding for local public works" (187), then the evidence to support this, which might appear in the Rotuli Parliamentorum, is absent from this study.

Cooper finally examines the crown's use of propaganda to win over the hearts and minds of the Westcountry people. For Cooper, popular obedience to Tudor government was achieved through a combination of printed and preached propaganda, and the crown's use of the parish church and its clergy to politicise the act of going to church. During the course of the Henrician Reformation more benefices came under crown control and "the role of the parish priest as an intermediary between monarch and subject became more prominent than it had ever been" (216). The lack of university-trained preachers in the region, it is claimed, was compensated for by the crown's use of printed homilies such as the 'Exhortacion to Obedience' (1547) to convey its will. How or why the homily should have been especially important in Cornwall and Devon or the remoter shires more generally is not explicit, and Cooper himself admits that the impact of the homily is "difficult to quantify".

Cooper's revisionism is a welcome corrective to much previous historiography that has relied on the largely unwarranted assumption that the extreme west of the country was a political backwater. Although there appears not to have been the same kind of financial interdependence that existed between the crown and other regions, especially large towns such as Bristol or London, where it acted as a prelude to closer political contact, Cooper has highlighted how Tudor government increasingly and consciously fostered political allegiance through cultural processes and events also. Cooper's book will appeal to both those interested in Cornwall and Devon, for which it sets the region in a genuinely new perspective, and to those interested in Tudor politics and political culture more generally, for whom it will further existing debate over centre-periphery relations and regional identities.

There remains however, plenty of scope for future study of political culture in the 'Westcountry' region. If however, as Cooper suggests, allegiance to the crown was partly (perhaps mostly) generated by "the unique political and cultural structures" of the Westcountry region, then historians of Tudor politics will continue to find their greatest rewards not only in central archives but in local ones also, and perhaps ultimately, from a combination of both. Cooper has proposed that Tudor governments were "sensitive to the many differences of the English territories", and that "rather than searching for the inexorable progress of a monolithic and centralizing Tudor state, we should be aware of the contribution of diversity to effective local government" (171). This book has thus reinforced the need for a greater appreciation of the diversity of regional political culture and communication and further research in this field is needed at a local and national level if we are to gain a clearer understanding of the workings of Tudor politics and a deeper appreciation of the development of the British state. [3]

[2] Hannes Kleineke: Why the West was Wild: Law and Disorder in Fifteenth-Century Cornwall and Devon, in: Linda Clark (ed.): The Fifteenth Century III: Authority and Subversion, Woodbridge 2003, 75-93.

[3] In this respect see for example James Lee: Urban Recorders and the Crown in Late Medieval England, in: ibid., 163-177.