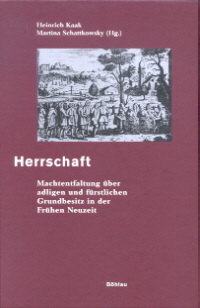 This is the newest addition to a succession of excellent edited volumes about lord-peasant relationships that have emerged from the Max-Planck Arbeitsgruppe "Ostelbische Gutsherrschaft als sozialhistorisches Phänomen" ("East-Elbian Manorial Lordship as a Phenomenon in Social History") at the University of Potsdam since the mid-1990s. This volume distinguishes itself from most of its predecessors by concentrating on the "lord" side of this relationship, although it remains true to the history-from-below approach of the Potsdam Group by never losing sight of the perspective of the peasants.

The volume falls into two parts. The first and slightly shorter half of the book consists of six contributions on "styles of lordship", in which noble landlords themselves stand at centre stage. The second and longer section of the volume consists of seven contributions on "the mediation of lordship", which analyse the agents and officials who implemented the strategies of noble and princely overlords but also operationalized them for their own purposes. The geographical focus is almost wholly on German-speaking central Europe, with the exception of one essay on Burgundy and one on Hungary. There is an unsurprising focus on areas of "Gutsherrschaft", with three contributions on Brandenburg alone. The remainder - Mecklenburg, Schleswig-Holstein, and Swedish Pomerania, Lower Saxony, Electoral Saxony, Lower Austria, and Franconia - include areas of "Grundherrschaft" alongside both strong and weak varieties of "Gutsherrschaft".

The volume begins with a short introductory chapter containing an interesting engagement with prevailing theories about lordship, including Robert Berdahl's concept of paternalism, Max Weber's dichotomy between traditional and legal lordship, Pierre Bourdieu's contrast between soft or euphemistic and open coercion, Norbert Schindler's poles of personal and "objectivized" lordship, and Heinrich Kaak's own concept of self-activated vs. mediated lordship. However, after this promising beginning, the editors devote most of the introduction to paragraph-long summaries of each essay in the volume, which might perhaps more usefully have taken the form of abstracts placed at the beginning of each chapter. The editors ask some important questions about the delegation of lordship, regional patterns of lordship, chronological changes, the effect of the Thirty Years War, the role of the "civilizing process", the classification of hierarchies of mediation, and the relative role of institutional hierarchies compared to local contexts in deciding how lordship worked out in practice. However, it is a pity that they draw back from providing their own answers to these questions. It would have been stimulating if the editors had been willing to use their expertise to weave together the findings of the various contributions into a synthesis, however provisional, which might have provided a basis for future research.

Having said that, it must be emphasized that the editors have brought together a strong authorial team and encouraged them to provide precisely the sort of detailed, micro-historical analysis required for addressing wide-ranging questions. So rich is the material presented in the essays that the space available in this review is inadequate to summarize all of the themes and questions on which they touch. The reader is advised to consult the editors' own summaries on pp. vii-xv. Instead, this review will draw out two specific themes which are vividly illustrated by this rich collection of micro-studies.

The first concerns the economic rationality of lords and their agents. Edgar Melton, for instance, considers the relationship between rationality and paternalism in the thought of Wolf Helmhard von Hohberg, coming to a diametrically opposed conclusion to that advanced by Otto Brunner in his seminal study of that early modern Austrian nobleman's view of lordship. Several essays - notably those of Ernst Münch and Martina Schattkowsky - demonstrate the central importance of efficient economic estate management to the wider exercise of lordship and the long-term fortunes of noble families. William Hagen goes so far as to argue that such efficient estate management should be described as "capitalistic", although most economic historians would probably disagree. The fact that Brandenburg lords and their agents sold estate output on markets does not mean that the estate economy was conducted through capitalistic mechanisms in the sense of voluntary transactions by economic agents who enjoyed unrestricted legal access to these markets. Rather, Hagen's evidence makes clear that the estate economy in Brandenburg continued to be based on manorial mechanisms, through which overlords exploited their extra-economic privileges to coerce rural subjects to provide labour and to sell (and buy) goods under non-voluntary conditions. However, both this and most of the other essays in this volume demonstrate that both profit maximization and market participation were widespread under early modern estate lordship, whether west or east of the Elbe, and that the key variable was not the presence or absence of market mentalities but rather the institutional and legal constraints permitting or preventing particular groups of economic agents from engaging in those activities they regarded as natural and desirable. It is to be hoped that such findings will stimulate future research into the precise characteristics of the institutional constraints on agricultural growth and change in different zones of pre-industrial Europe.

The second major theme to emerge from this richly detailed collection relates to the basic question: did lordship matter? A number of recent contributions to the literature on serfdom have emphasized "peasant autonomy" and have downplayed differences in agrarian institutions, some going so far as to argue there was little or no difference in practice between eastern "serfs" and western "free" peasants. The essays in this book demonstrate decisively that although the dividing-line between "serfdom" and "freedom" cannot be drawn in simplistic terms, the institutions of lordship mattered and peasants perceived them to matter. Thus - to give just a few examples out of the multitude in this volume - Brage bei der Wieden analyses important differences within Lower Saxony in lords' legal entitlement to eject peasants from their holdings. Wolfgang Schmale shows how sixteenth-century Burgundian peasants perceived it as extremely costly not to be able to marry outside their local area due to serf status. Gerhard Rechter tells the story of how Franconian lords succeeded in diminishing the autonomous powers of village communes in the course of the sixteenth century. Otto Ulbricht provides evidence of how lordship in seventeenth-century Schleswig-Holstein was sufficiently strong that a badly disposed lord could regard himself as entitled to turn a personally free demesne-farm-manager into a serf, a threat the official could only avoid through abandoning position and property for refuge in a town. Ivo Asmus reveals how serfs in seventeenth-century Swedish Pomerania regarded the decision of the lord as so important for their well-being that they were willing to invest considerable resources in petitioning him directly, over the heads of the manorial officials. Heinrich Kaak highlights how labour services were sufficiently burdensome and inescapable in eighteenth-century Brandenburg that serfs, far from showing solidarity with one another in resisting such services, competed to shift the burden off onto other groups of serfs, particularly those from other villages. Karl Schneider demonstrates that even during the nineteenth-century agrarian reforms in Lower Saxony, manorial officials still had sufficient power to block enclosures desired by the peasants because such reforms would have damaged the officials' own profits from their legal privileges over sheep-herding. András Vári shows how the extra-economic powers of both overlords and their officials continued to determine how the Hungarian cattle economy operated as late as the mid-nineteenth century.

Thus in nearly every case examined in this volume, micro-level evidence clearly demonstrates that lordship mattered. Peasants were willing to incur substantial costs to evade or resist lordly regulation, suggesting that they regarded lordship as constraining their actions. There may have been certain specialized spheres of life in which peasants could enjoy a certain degree of autonomy. But these essays show that in the vast majority of cases, rural people perceived themselves as being significantly restricted in important spheres of life by the exercise of lordship over them. This corrective to the over-emphasis on "peasant autonomy" - whether under serfdom or under any other early modern agrarian system - is arguably the most important insight to emerge from the rich and stimulating material presented in this collection.