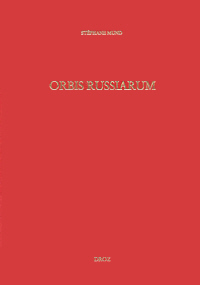 During the so-called Age of Exploration, Early Modern Europeans in search of spices and silk discover new trade routes and previously unknown lands. This spirit of discovery also holds true for the Eastern borders of the European continent, as Western diplomats and merchants begin to develop ties with the sovereigns of Muscovy, and then publish the first eyewitness accounts of these journeys.

In his carefully researched book, Orbis Russiarum, Stéphane Mund examines the available written sources to show how the representation of the "Russian" world developed in Western Europe during the fifteenth and sixteenth centuries. [1] The author considers primarily narrative sources (travel accounts and treatises) and, to a lesser degree, chronicles, pamphlets and panegyric poems. He analyzes the manner in which a set of stereotypes and perceptions about the Eastern Slavs - their lands, customs and way of life - developed and were then disseminated through Latin Christendom ... stereotypes that in large part are still with us today.

Some of the questions that Mund addresses in his study include: the background of the authors of the accounts and treatises; whether they in fact traveled to the countries in question (and if not, how they received their information); and the context of the work, including its intended readership, and mode of production.

An overview of the relations between Muscovy and Western Europe reveals that Venetians, interested in access to the Orient and Central Asia, first visit Moscow in 1471. The Papacy and the Holy Roman Empire send delegates soon thereafter, who try to enlist the Tsar in an alliance against the Ottomans, or attempt to mediate in the Livonian Wars that had begun in 1558. The English arrive at the coast of the White Sea in 1553, leading to the creation of the "Muscovy Company", which receives liberty of passage throughout Muscovy. Elisabeth I and Ivan IV the Terrible conduct a twenty-year correspondence, in which the latter hopes to receive military assistance against his Baltic neighbors.

The heart of Mund's work is in the first two chapters, in which he examines the primary sources concerning Muscovy and Ruthenia. Chapter one considers some twenty travel accounts written primarily by diplomats or merchants, including Venetians, Jesuits sent by the Pope, English merchants and diplomats from the Holy Roman Empire. They write mainly first-person vernacular accounts of Muscovy that are addressed to a certain individual, and not necessarily meant for a wider audience. The accounts contain very little geographical information about the lands visited, and, depending on the type of mission, concentrate on the religion of the inhabitants, or the economic possibilities in the land. Due to their isolation from the native population and unfamiliarity with the language, the travelers' observations are based on a superficial understanding of Muscovite society.

The next chapter is concerned with twelve European treatises of chorography, which were primarily written in Latin for an educated Western public. These accounts are more systematic studies of "Russia", its geographical limits and natural resources, its inhabitants, political system and main historical events. The authors represent countries that have political and economic ties to the Eastern Slavic world, and include: Italians (Antonio Possevino); English (Giles Fletcher); a Pole (Maciej de Miechów); a Swede (Olaus Magnus); and the author of perhaps the most influential treatise on the region, Sigismund von Herberstein. Herberstein, who first traveled to Muscovy in 1516 at the request of Maximilian I, was particularly well-suited for his diplomatic mission. A member of the nobility, he spoke eight languages, including Slavonian, which allowed him to communicate directly with his Muscovite interlocutors (this was indeed an exception, since hardly any travelers spoke Russian). After a second mission, he spent twenty years working on his account before it was first published in Vienna in 1549 under the title Rerum Moscoviticarum Commentarii. Whereas previous authors had praised certain aspects of Muscovy and its inhabitants (the honesty and beauty of the people, the fortitude of its soldiers, who can withstand cold and hunger), Herberstein is more critical than his predecessors, as a whole, due perhaps to his ties to the Polish-Lithuanian aristocracy. He condemns the dishonesty of Muscovite merchants, the people's penchant for drunkenness, the despotism of the sovereign, the corruption and injustice of the legal system, the lack of education, and so on ...

The third chapter lists chronicles and panegyric poems that concern Muscovy and Ruthenia. Pamphlets of the age, "Flugschriften", usually written by Polish or German authors, using simple language and an image for the benefit of a wider public, reinforce the negative image of the Muscovite world in the West. The Tsar is portrayed in Ottoman-style clothing, with a mustache and long saber; and sensational language is used to portray recent events: "grausamme Tiranney und jämerlich blutvergiessen so der Moscoviter in Littauw an vilen Christen begangen hatt"; "Warhafftige Newe Zeitung vom grausamen Feindt der Christenheit dem Moscowiter [...]" (347-48).

In the final section, Mund first examines the publication history of the primary texts concerning Muscovy and Ruthenia - those published most often; the types of publications; their distribution; the editors and places of publication; the translations of the texts - and how they were integrated into compilations by such celebrated editors as Richard Hakluyt and Giovanni Battista Ramusio. The author then concludes with a study of the "emprunts", that is, with an analysis of the information from the primary sources (in particular the treatises on chorography) that was then integrated into cosmographies and atlases of the world by such authors as Sebastian Münster, Johannes Boemus, Giovanni Botero, Abraham Ortelius and Gerhard Mercator. This last point - who borrowed from the originals, and how - has not been studied systematically before, and is important, since it helps to determine the influence of certain works in transmitting impressions about the Eastern Slavs to the West.

The main aim of Mund's research is the "genesis and development of a particular representation of the 'Russian' world in the Latin West" ("la genèse et le cheminement d'une certaine représentation du monde 'russe' dans l'Occident latin", 462). The strength of his study lies in the almost encyclopedic compilation of sources concerned with fifteenth- and sixteenth-century Muscovy and Ruthenia. Thus the work serves as a rich source of information regarding these texts and their influence in the sixteenth- and seventeenth centuries, as the information contained therein was transmitted to other works, which reached a wider public over time and helped shape the conception of Western Europeans regarding their far-off Eastern neighbors. The downside is that the encyclopedic approach leads to some repetition of facts, and to a rather dry style of presentation. What is new in Mund's study is that he has grouped together texts that were previously carried out in different places and with different aims. Also, he privileges the point of view of the observer and the narrator, instead of the reality which was observed and narrated. Finally, his study is based not only on foundational texts, but also on those texts that were inspired by those foundational texts.

Readers who are interested in the development of the stereotypes of this part of the world, and how they reached to the West, will want to consult this work.

[1] Regarding the thorny problem of terminology, Mund notes that "Russia" serves to indicate the first common state of the Eastern Slavs, created around Kiev, from the tenth to the thirteenth centuries; "Eastern Slavs" serves to indicate the inhabitants of "Russia", the common ancestors of modern-day Russians, Ukrainians and Belarusians; "Ruthenia" designates the Western regions of former "Russia" (that is, the territories of modern-day Belarus and Ukraine) that came under Polish and Lithuanian control after the fourteenth century.