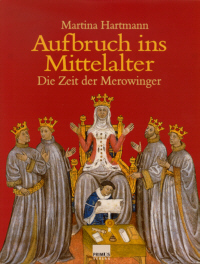 The Merovingian world is almost impossibly distant from our own and almost impossible for moderns to visualize. Europeans live surrounded by the material remains of the Roman Empire and the great cathedrals of the Middle Ages. Their societies have self-consciously adopted Roman traditions of law and philosophy and their nations and peoples identify for better or worse with kingdoms and polities that emerged during the high Middle Ages. But from the Merovingian world virtually no monumental buildings remain, apart from the baptistery in Poitiers and the small crypt in the monastery of Jouarre near Paris. No European state claims the Merovingian kingdom as its direct ancestor, and what little the general population knows about the period - a few stories taken from Gregory of Tours' Histories - is synonymous with violence, brutality, and ignorance. In France, the greatest of the Merovingian rulers, Dagobert, is remembered only in a demeaning nursery rhyme, while in Germany Dagobert is the name of Donald Duck's avaricious uncle.

Thus it is greatly to Martina Hartmann's credit that she has produced a lucidly written, profusely illustrated book intended to inform a wide, general readership about the lost world of the Merovingians. In this she has largely succeeded, even if one might have wished, here and there, for a more integrated and analytical perspective into this complex and foreign world.

The book is a synthesis of German scholarship produced in the past decades, especially that of Eugen Ewig and Margarete Weidemann, whose monumental Kulturgeschichte der Merowingerzeit nach den Werken Gregors von Tours was, as the author acknowledges, a major source of information on daily life and culture. Although written for a broad public, Hartmann has organized her book in classic academic fashion: She begins with a chapter on written sources, discussing the major narrative, hagiographical, and archival texts, but never directly addressing the thorny problem of how to "read" the archaeological sources which for the Merovingian period are of primary importance. The second section is a narrative history which consists essentially of the political history of the Merovingian family itself from Childerich I (463-481/2) to the deposition of the last Merovingian Childerich III in 751. This section closely follows traditional Ereignisgeschichte, focusing on the Merovingians themselves and later their Hausmaiers, and largely ignoring either regional developments in areas such as Bavaria, Provence, Alemannia, or Aquitaine, or the continuing place of the Merovingian kingdoms in relationship to the Byzantine Empire or, for the most part, their relations with the Lombard, Anglo-Saxon, and Visigothic kingdoms. Subsequent chapters treat political institutions, society, the Church, education and culture, and everyday life. In these chapters the influence of Margarete Weidemann and through her Gregory of Tours's Ten Books of Histories are most pronounced, resulting in a source-rich account of society and culture, but also necessarily privileging the first century of the Merovingian world over the subsequent two and as a result producing a somewhat static image of what were surely three centuries of enormous social, political, cultural, and economic transformation.

Throughout, the volume is illustrated not only with images of surviving Merovingian documents, objects of daily life and archaeological finds, but also with the illustrations produced by Jacques Chifelet for his 1655 publication of the grave articles from Childerich I's tomb in Tournai, carefully produced modern reconstructions of Merovingian dress drawn from archaeological materials and, more problematically, with wildly anachronistic images of Merovingians from the Late Middle Ages and the nineteenth century. One must applaud the desire to create a visual world for the Merovingians, but at the same time one could wish that images and text had been more closely related and the contrast between text and image drawn into the analysis. For example, a photograph of an extraordinary fragment of a monastic revenue account from the seventh century illustrates the discussion of the eighth century Fredegar Continuation, but is not mentioned in the section devoted to agriculture, which entirely ignores the important question of the structure and organization of the agrarian economy to discuss exclusively varieties of plants and diet.

Specialists may regret that Hartmann does not delve more deeply into the many hotly debated aspects of Merovingian history, from the baptism of Clovis to the "Staatsstreich" of Grimoald, to the increasingly disputed circumstances of the Carolingian rise in the early eighth century. Others will regret that economic history gets little mention, either in terms of international commercial relations or the dramatic development and expansion of the "classic" manorial system that seems to have developed first on royal estates in the Parisian basin and then spread outwards across much of Europe. An international audience will regret that while leading British, Canadian, Dutch, and American scholars appear in the bibliography, little of the insights of a Peter Brown on the fragile nature of episcopal power in the sixth century, of Walter Goffart on the utterly unreliability of Gregory of Tours for detailed narrative history, of Janet Nelson on the precarious position of Merovingian queens, of Richard Geberding on the rise of the Carolingians, or of Ian Wood (erroneously identified as Jan Wood in the bibliography) on numerous points of Merovingian history actually seem to inform the text. But such criticisms would be unfair: Martina Hartmann has wanted to make a wide public aware that there is more to the Merovingian world than Chlodwig at Tolbiac or le bon roi Dagobert, and she has wanted to whet their appetite for more. In this she has surely succeeded.