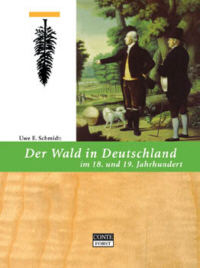 Uwe Eduard Schmidt has provided an important, informative and considered contribution to the debates over 'wood shortage' or 'timber famine' in the early modern period. Despite a long-running historiographical debate that has flared up again the past two decades, this work, perhaps surprisingly, is the first serious attempt to quantify the existence and the magnitude of any shortages on a regional or national scale. Schmidt examines in particular the regions along the west bank of the Rhine but draws in comparisons with other regions of Germany and to a lesser extent other European countries. The core period of Schmidt's study is the classic period of the wood shortage debate, roughly lying between 1750 and 1850. The core of the research is directed towards a series of questions testing the reality and experience of shortage. While there is much to be found here of interest more generally to the forest historian, this volume is not really a general history of Germany's woodlands. However, in the course of his study Schmidt provides a large body of evidence from a variety of sources that will be of great use to scholars, his more general conclusions aside.

Schmidt directs his arguments first and foremost against the claims of those, such as Radkau, Schäfer and Allmann, who have questioned the reality of early modern wood shortages. The sceptics have rather suggested that 'wood shortage', or fear of predicted shortages of raw material for heating and building, was primarily a rhetorical device that allowed the early modern state to legitimate and expand its control over valuable resources, frequently in alliance with large business interests. In contrast Schmidt argues that shortages were real, recognised at an early date, and frequently met with determined measures to alleviate the situation. These results are not based on anecdotal or unquantifiable observations. Instead, Schmidt has sought to critically utilise all of the extant sources in a region (especially in this case the Hunsrück, Eifel and Saarland) to build up a database of the effective demand for and supply of wood. Schmidt remains well aware of the pitfalls of interpreting often self-interested comment. Unsurprisingly most sources are the products of worries, conflict and prognostications of forthcoming difficulties, rather than satisfaction with the current state of affairs. However, the carefully-reconstructed figures provided by Schmidt seem convincing. With this method, we can also no longer simply speak of and contrast the opposing interests of industry, peasants, the states or the forestry administration. Schmidt shows that the divisions within these groups were often deep. This approach is not entirely new, of course. The utility of a multi-faceted approach to sources has been demonstrated recently by Winfried Schenk (a surprising absence from the bibliography) and the recently appeared work of Christoph Ernst on the Archbishopric of Trier, which is barely discussed despite dealing with much the same regions of Germany.

The book is divided into four main sections. A theoretical introduction is followed by a long, very detailed and somewhat schematic presentation of the data that forms the fundament of the study. The data is then utilised in a third section providing a detailed analysis of the results on a regional basis. The book concludes with a more general interpretation, that places this work in the context of current research in forest history. Although perhaps useful for comparing the experience of different areas and groups of consumers of wood, the general reader will probably find this structure somewhat time-consuming, if not a little tedious. The style belongs more to the natural than the social sciences or humanities. The separation of data, analysis, and conclusion means that facts may be repeated four or five times, and when initially presented as raw data, their significance is difficult to discern. If the local studies suffer at times from being overly burdened with information, the opposite is true of section providing comparisons with other European countries. In the latter the observations are of a very general character and lack, at times, familiarity with much of the recent literature (for examples, the works of Corvol or Wornoroff on France). It should be said however that these failings arise from the legitimate desire to do justice to a large databank of results by engaging with other comparative research.

Is Schmidt correct in his arguments? The weight of evidence from pictures, reports, court records, surveys, and account books is certainly impressive. Nevertheless, at times the estimates seem unlikely or at least problematic, for example that the rate of exploitation from iron- and glassworks alone in that part of the Saarland under the rule of the House of Nassau in 1766 was 400 % over the regrowth rate of the local woodlands. Unless an enormous stock of old growth wood was present, such a rate would have destroyed the woodlands completely in only a few years. The estimate that annual 'per capita' firewood needs were around 2.5-5 cubic metres of solid timber also seems, in my estimation, much too high, more akin to levels that would be found in Scandinavia. Yet it is a virtue of Schmidt's study that he has provided so much data, allowing us to make out own calculations and agree or disagree.

It has long been recognised that 'wood shortage' or shortages of resources in general are frequently the result of bottlenecks in transportation and high transport costs, or expressed differently, are a product of the willingness of consumers to pay high transport costs. Schmidt has worked on the assumption that early modern Germany, and Europe more generally in this period, was characterised by isolated and identifiable regions of wood consumption with little relation to each other. Consequently, and dependent on local settlement and economic structures, these 'closed systems' could come to suffer from shortages in basic resources. Perhaps in this period a more developed infrastructure was simply beyond society's means. However, to some degree this was the result of a decision that lay in the hands of the powerful not to invest or encourage institutional flexibility. In this sense 'wood shortage' is a question that rests on the terrain of 'political economy' as some have argued, but not in the sense that it is simply rhetoric developed and directed in a self-interested manner by the State. Rather, we see the results of a politically fragmented and ideologically mercantilist world where exchange between regions is hindered and limited. If Schmidt can reasonably represent the viewpoint that genuine scarcity of wood was experienced by Germans at the end of the eighteenth century, this argument applies only under the star of contemporary political and institutional conditions that must be placed in the centre of our understanding. By the late eighteenth century one hears very little of 'wood shortage' or 'timber famine' from countries such as England and the Netherlands, who although favoured with alternative fuels, had in part overcome such difficulties by a 'timely' escape from political and jurisdictional fragmentation and the development of free trade. Of course, in the long-term the introduction of coal as the primary fuel was central to Britain's success. Schmidt also argues that the transition to coal use was the only effective strategy that freed Germany from its crisis of energy scarcity. Efforts to improve the productivity of forests enjoyed only limited success. While they could raise production levels and yields to some degree, they could not keep step with the continually growing extent of demand.

The conclusions of this volume, as with other contributions to this enduring debate, will certainly be disputed. The work as a whole does provide however a new standard for research of this type. It certainly deserves attention, both as an excellent source for data on the regions of the left bank of the Rhine, and as a necessary and considered presentation of our knowledge of the forest and energy history of Germany at this point in time.