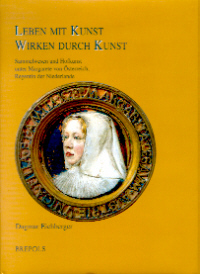 The past two decades have witnessed a burgeoning field of study in the history of collecting, with particular emphasis on the early-modern, transalpine "Kunst"- and "Wunderkammern". Despite the considerable amount of scholarship to date on collections of this period, Eichberger's conscientious study of the collections of Margaret of Austria (1480-1530), Regentess of the Netherlands, at the "Hof van Savoy", her court in Mechelen, is a welcome and impressive addition to the field. By definition, her book addresses three significant gaps in the literature on "Kunstkammern". First is the important role of women as collectors; second, the phenomenon of courtly collecting in the Habsburg-Burgundian Netherlands; and finally the status of such collections in the early sixteenth century. This period represents a bridge between the lavish Franco-Burgundian court holdings of John of Berry and Philip the Good of Burgundy and the fully-formed, quasi-institutional collections of the Wittelsbach Dukes in Munich or the Habsburgs of Ambras, Vienna and Prague.

Margaret of Austria thus serves as an especially important case study. Daughter of Mary of Burgundy (1459-1482), last direct heir of the Burgundian line, and the Habsburg Emperor Maximilian I (1459-1519), Margaret was among the primary conduits by which the Burgundian culture of courtly display was transmitted to the Habsburg dynasty that dominated sixteenth-century Europe. As Eichberger compellingly argues in her first chapter, Margaret's decisions and choices about her own portraits already reveal a clearly strategic deployment of art and artifacts to fashion a self-sufficient persona for herself, following a tragic sequence of matrimonial experiences. Margaret, twice a widow by the age of 24, took on the duties of governing the Low Countries for her father, and settled in Mechelen where she constructed an impressively cultured court and assembled her remarkable collections. In Eichberger's convincing analysis, Margaret used various facets of her collections both as a form of personal and political "representatio" and to advance the dynastic interests of her family.

We have inherited an extraordinarily rich documentary legacy concerning Margaret's possessions, partly in the form of six inventories compiled during her lifetime and five that were drawn up shortly after her death. Unusually detailed for the period, the inventories allow the author to open a window onto the system of critical values in operation at the court in Mechelen. In Chapter VI, for instance, Eichberger provides a fascinating analysis of the evaluative vocabulary used in the inventories to create an extremely nuanced critical palette. The sequence of inventories also permits Eichberger in Chapter VII to give a rare glimpse into how a sixteenth-century collection and its display evolved over time, as she does in regard to the "petit cabinet" and the "cabinet emprès le jardin" using the inventories of 1516 and 1523.

The household inventories are not the only primary sources concerning Margaret's court and collections that survive. The municipality of Mechelen itself acquired and refurbished Margaret's residence, the financial records of which survive. These documents, included as an appendix, give Eichberger the means in Chapter II to make a reasonable reconstruction of the original layout of the buildings and their interior rooms. As in other courts of the period, Margaret also collected musicians, artists, scholars and poets, including the renowned poet Jean Lemaire de Belges. Among the more intriguing of his works, within the context of the Mechelen court, is his encomium of Margaret entitled the "Couronne margaritique". This work of 1505, underutilized by scholars, presents one of the earliest known canons of Netherlandish and German art, as embodied in the collections of his patroness. Eichberger helpfully includes a lengthy citation from the allegorical poem concerning the artists whose works are found in the collection (351). Regrettably, however, she does not explicate it in much detail, devoting only one page of commentary to the twenty-nine lines of verse, although she does discuss the manuscript in more general terms elsewhere.

Eichberger's approach to Margaret's collections is first and foremost art-historical. She devotes by far her greatest attention to the paintings and sculpture of Mechelen, and at that primarily in iconographic and stylistic terms, albeit consistently acknowledging the significant presence there of "naturalia", "exotica" and "curiosa". Chapter I considers portraits of the regentess, dividing them among images of Margaret as a child, as a widow, as Philibert's wife and in historiated roles as religious or allegorical figures. Here Eichberger's iconographic approach is perhaps the most compelling, as also is her discussion in Chapter III of dynastic portraiture. The inclusion in that chapter of battle scenes and assorted occasional pieces, such as the illuminated manuscript of Charles V's coronation entry into Bologna, sits less comfortably within the rubric of "dynastic" iconography. Still more uneasily do the assorted Aztec objects reside there, as the author herself appears to acknowledge (185). Most problematic is the iconographic approach taken to Margaret's religious images and artifacts. Dividing them among Marian, Passion and saintly subjects does little in regard to elucidating the religious practice of the regentess, since virtually all Christian art at the time falls within these general rubrics, with the exception of images of Christ's infancy (that the author omits as a separate group within the chapter, despite the presence of such subjects within the collection). This division also does some violence to the integrity of Margaret's collections, since her religious images were distributed widely throughout the residence, often intermingled with quite profane imagery.

The author's art-historical bent also manifests itself in the discussion of style and value in Chapters V and VI. In the former chapter, Eichberger discusses the degree to which Margaret's collection reveals a preoccupation with the Italian Renaissance and served as a stimulus for a broader interest in Italianate and Classical art north of the Alps. While the presence in Mechelen of Jacopo de Barbari, and her possession of copies of such Classical works as the "Spinario" certainly testify to an awareness of Italy and the ancient world, the author herself later acknowledges that the real strengths of the collection lay in Netherlandish art, both of her own time and that of her Burgundian forebears. That Margaret patronized Italian artists and owned replicas of ancient art surely speaks more to the exigencies of participating in a trans-European courtly culture and gifting network than of a particular desire to display her "Renaissance" inclinations. After all, many Italian courts displayed equal interest in acquiring and exhibiting Netherlandish art. The dissemination of rare objects as a means to cement social relations among the nobility may also partly explain the presence of Meso-American objects in Margaret's collections. The original recipient of these artifacts was her nephew, Emperor Charles V, who apparently sent them on to Margaret and others very shortly after receiving them from Cortez. Margaret herself then passed many of these objects on to other members of the family and the broader princely community.

Eichberger begins and ends her excellent book with questions about how Margaret of Austria's collections functioned, and of where they should be situated in the larger history of early-modern collecting. In the picture she paints of the Mechelen collections, we see an intriguingly seamless continuity between objects fully integrated within the household and those separated out into dedicated collection rooms; between directly utilitarian objects and those prized more for their aesthetic qualities or their pleasant novelty. Eichberger's questions concerning the purposes of the collections and their place in the history of the "Kunstkammer" remain only partially answered, however. One way of defining the fully formed "Kunst"- and "Wunderkammern" of the later sixteenth and seventeenth centuries is through the multiple economies of value that inform them. As in Margaret's collections, aesthetic and political values were certainly paramount. But no less important was something we might call "knowledge value", an index of the specifically epistemological functions, both pragmatic and theoretical, of these collections. To what extent can we see similar concerns at work in the "cabinets de madame" at Mechelen? Here lies the greatest puzzle. Eichberger's book provides both the stimulus and much of the means to approach these issues. Without doubt, it has rewritten the history of early-modern collecting and will help shape the terms of future research in the field.