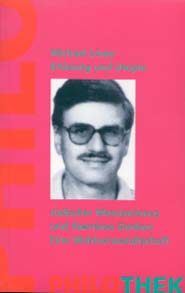 First published in Paris in 1988, Marxist sociologist Michael Löwy's study of Jewish intellectual thought in early twentieth century Central Europe still provides original insight into German Jewish cultural history. Löwy argues that the paradigm of the "Wahlverwandtschaft", as utilized by both Goethe and Max Weber, can help describe the nature of the symbiotic relationship between two seemingly opposing modes of thought: Jewish messianism and libertarian utopianism. According to Löwy, because the "Wahlverwandtschaft" represents an entirely new creation that can no longer be reduced to the mere sum of its parts, it best illustrates the dynamic result that occurs when these two modes of thought merge. As Löwy notes, the specific constellation of social, historical and cultural conditions in Central Europe in the early twentieth century provided the necessary backdrop against which German Jewish intellectuals were able to combine these two strands of thought to form a completely new conception of history. The greatest merit of this new form, which he terms "historical messianism," is that it maintains idealistic neo-Romantic ideas of the future without advocating supreme, authoritarian power: "Er hat das große Verdienst, die religiöse und totalitäre Verehrung des Staates und die einer obersten Führerfigur als katastrophalste Formen einer Vermischung von Religion und Politik entschieden verweigert zu haben" (295).

Löwy also claims that Central European Jewish intellectuals whose philosophies are not normally considered together were indeed bound by their consideration of both Jewish messianism and libertarian utopianism, though admittedly to widely varying degrees. Walter Benjamin is his strongest example, and indeed, Benjamin's theories of history fit best to Löwy's conception of historical messianism. The links of other intellectuals to this paradigm, however, are more tenuous. He divides them according to two groupings: religious Jews with anarchistic tendencies, such as Franz Rosenzweig, Martin Buber, Gershom Scholem, or assimilated libertarian Jews, such as the anarchists and anti-authoritarian Marxists such as Gustav Landauer, Ernst Bloch, Erich Fromm, Ernst Toller, and Georg Lukács. While some focus more on Jewish messianism (Rosenzweig), others concern themselves more with libertarian utopia (Bloch). For some, the concept of historical messianism is central (Benjamin), but others touch upon it only briefly (Lukács). While Löwy maintains that these intellectuals fall into place along a spectrum of thought between both poles, he goes too far in insisting that elements of both strands - even if they are only vague undercurrents - can be identified definitively in every author's work. In order for his paradigm to work, Löwy would have to illustrate clearly the "anarchistic tendencies" of Buber and Scholem; instead, he merely notes that their universalism kept them from being chauvinistic nationalists - a weak argument at best. And, while Löwy proposes an intriguing idea that the assimilated Jews in the second group still maintained a Jewish identity, he does not provide a strong enough argument to prove his point, particularly in the case of Lukács.

However, Löwy's attempts to forge a common link between these German Jewish intellectuals is a daring and welcome challenge, especially as most scholars do not venture to investigate how the Jewish backgrounds of such a disparate group of thinkers could be little more than coincidence. He also provides plausible reasoning as to why Jews in Central Europe were the main protagonists of historical messianism, emphasizing the development of neo-Romanticism as necessary for the rebirth of Jewish messianism in its restitutive, utopian version. It was this strain, combined with libertarian utopian visions of the future, which proved so appealing to the range of Jewish thinkers explored in his book. As to why these ideas should appeal to Jewish intellectuals in particular, Löwy posits that the rapid industrialization and development of capitalism in Central Europe in the last quarter of the 19th century played a large role. While these changes deeply shook Central European society and class structure, the effects on Jews were even more far-reaching. Many Jews moved from villages to cities as a result of these changes, where they became a part of the bourgeoisie and hoped to assimilate. Thus, the nostalgic, neo-Romantic response to world events, which sought to reclaim the spiritual magic of a materialist and vulgar world, became particularly significant for a number of Jewish thinkers who also reacted to attempts at assimilation. Because revolutionary and Romantic messianism did not attract West European and American Jewish intelligentsia in quite the same way, and because Eastern European Jews did not have to detach from religion completely in order to accept the intellectual ideals of the day, Löwy argues that the phenomenon of the 'metaphysical anarchist' remained confined mainly to Central Europe

Löwy's argument could have been stronger if he had spent more time examining the differences between those thinkers who were directly influenced by their Jewish beliefs, and those who he claimed were only indirectly attached to Jewish spiritual ideas. While his is a compelling and worthwhile study, a deeper and more explicit examination of those on the fringe would have strengthened the case for widespread "historical messianism" amongst Jewish intellectuals in Central Europe.