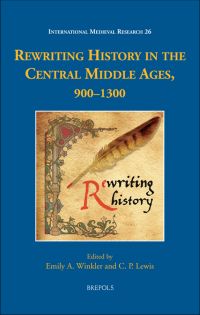 History is powerful tool. This was particularly true in the central Middle Ages, as historical writing was wielded across the period (and across Latin Christendom) in a multitude of ways and for a multitude of purposes, such that records of the past were not only relentlessly written, but also just as frequently rewritten. It is to this latter process that this engaging volume, which emerged from Leeds IMC panels held in 2012 and 2013, is dedicated. As the editors note, this is due to the relative lack of attention afforded this form of history creation, as well as the fact that rewriting an existing story is in itself an act of novel meaning-making that can speak to how specific authors curated and recreated the past and how this was shaped by contemporary concerns.

The volume's first section deals with broader themes in medieval historical rewriting. Roman Deutinger starts by discussing the narrative tradition arising from the 1040 Reichenau World Chronicle. This fluid and widely-dispersed text, it is argued, was the inspiration, albeit not the unadulterated basis, for many others into the thirteenth century, and subject to distinct developments and extensions - with varied discussions of rulers, church history, and local ecclesiastical institutions - resulting from the aims, interests, and sources of each redactor, including Frutolf of Michelsberg and Otto of Freising. As the author notes, 'a tree with many branches [grew] from this root' (58). Next, Patrick Wadden challenges the belief that the Gaelic vernacular's prevalence in the Irish Sea region c. 1100 represents a 'backwards-looking' historical culture disconnected from Latin Christendom and obsessed with the 'heroic' pre-Christian period (67). This genre-spanning study, which considers annals, sagas (and saga-like chronicles), hagiographies, genealogies, and translations of classical works, argues that the vernacular historical canon reveals both that the present influenced, and was in turn influenced by, rewritings of the past and also the impact of new learning and knowledge across the Latinate world on Gaelic authors. Turning to Caucasia, Nikoloz Aleksidze considers how medieval Georgian and Armenian authors rewrote their (and their rivals') past to better construct group identities. Set against the back-drop of Chalcedonian divergence and Byzantinization, it is argued that writers belonging to both peoples competed for control over historical Orthodoxy - particularly when it came to key foundational moments of conversion and dynastic origins - and thus their relative contemporary status in medieval Caucasia. Their aim, in other words, was to write unchallenged and uninterrupted ethno-religious histories. Next, Maximilian Lau examines the court historians of the Byzantine Komnenoi emperors. Focusing on works produced to commemorate the eastern campaigns of John II Komnenos (d. 1143), Lau demonstrates that later works by John Kinnamos and Niketas Choniates represent, in part, the reworking of earlier court poems and letters created to glorify the emperor and that these smaller oratorial texts deployed framings drawn from biblical, classical, and more recent works to reassert John's and Byzantium's privileged position in both the sacred and heroic past.

The second part adopts a comparative approach and begins with Robert F. Berkhofer III's study of how and why monastic institutions - most especially St Peter's, Ghent and Christ Church, Canterbury - used both charters and narratives to create plausible but forged pasts in the eleventh and twelfth centuries. Thus, at Ghent, the house history, the Liber traditionum, used altered documents to manufacture a version of tenth-century reforms that elevated the foundation's status over nearby St Bavo's; while at Canterbury, the Latin-English 'F' version of the Anglo-Saxon Chronicle imported documents from the monastic cartulary to support and legitimise various claims. Staying in England, Jaakko Tahkokallio situates the king-centred writings of Henry of Huntingdon and William of Malmesbury not solely as part of an 'English' historiographical milieu, but within the movement known as the twelfth-century renaissance. Discussing the influence of the same classical Latin cultures that shaped continental literary production, it is argued that these authors' sophisticated (and popular) attempts to re-write the past as a form of moral education both speak to their active navigation of an 'international framework of literary culture', or a 'Republic of Letters' (170). Turning to southern Italy, Marie-Agnès Lucas-Avenel compares how Geoffrey of Malaterra and William of Apulia harnessed and preserved the familial reputation of the infamous Hauteville clan. Focusing on how each represented the expedition into Byzantine territory of the arch-adventurer, Robert Guiscard, in the early 1080s, Lucas-Avenel sees in their panegyrical, yet occasionally divergent, rewritings of this venture an attempt to forge versions of the recent past that, though they likely saw them as faithful, also served a distinct contemporary need - to legitimise the Hautevilles.

The third and final section turns to specific case studies. First is Pauline Stafford's study of pre-conquest Englishwomen described in the late eleventh-century 'D Chronicle' tradition of the Anglo-Saxon Chronicles. As Stafford shows, this text is remarkable for its coverage of several tenth-century women, especially high-status widows - a reality that can help us to understand how the various traditions of the Anglo-Saxon Chronicles emerged, to trace several now-lost vernacular sources, and, through comparison with John of Worcester, to witness (albeit not fully map out) the complex paths through which the English past was rewritten after 1066. The post-conquest historiography of pre-conquest England is also the focus of Alheydis Plassmann's discussion of the depiction of Æthelred the Unready and Edward the Confessor by William of Malmesbury and, to lesser extent, Henry of Huntingdon. It is argued that William sought, through his rewriting of the contrasting successes of these two reigns, to construct a model of the ideal peaceful realm (whereas Henry was more focused on tracing salvation history), which spoke to his particular hopes for the Anglo-Norman realm. Christopher Lewis continues the Anglo-Norman bent by discussing selfhood and perspective in Orderic Vitalis' rewriting of English history. Lewis traces whether Orderic's own 'Englishness' - he was born in Mercia but spent most of his life in Normandy - influenced his Historia ecclesiastica. It is noted, therefore, that while the authorial I/we punctuate the text, Orderic's personal and group identity, especially the English (or Mercian) one, and its impact on the Historia, is harder to unpick, as the very process of rewriting England's past meant 'the rewriting of his own identity' (290). Turning to Iberia, Kyle Lincoln examines how thirteenth-century Castilian texts rewrote the kingdom's history (from 1031 through to 1252) to emphasise its dominance over neighbouring (and eventually united) León. What is demonstrated is a conscious and consistent effort by Castilian chroniclers to emphasise the qualities and superiority of their kings. This is encapsulated by a thirteenth-century depiction the famous Castilian adventurer, el Cid, and his domination of a lion (the emblem of the kings of León) before the royal city of Burgos. Staying in the thirteenth century but moving further east, Gregory Fedorenko discusses the Estoire de Tancrède de Hauteville, a short text sometimes attached to copies of the broader Chronique de Normandie and Geste de France, and the survival beyond 1204 of Norman memories of their activities in southern Italy. Here, it is shown how the text's re-imaginings of the largely forgotten Hauteville progenitor, Tancred, and his son-in-law, Richard, prince of Capua, stand as testament to a contemporary Norman desire to use genealogy to preserve their cultural identity.

In sum, this is an engaging and interesting volume. The editors are to be praised not only for bringing together a set of essays that maintains a level of analytical continuity that belies the contributions' geographical and temporal differences, but also for the quality of the production. It can be all too rare these days to find published works that lack - at times quite severe - editorial issues, and this reviewer found none across the entire book. As such, while there is a sense that some of the chapters have not been as fully brought up to date in terms of their bibliographies as they might have, and thus do not always reflect the developments in historiography made since their delivery as a conference paper, this volume is a must for those interested in medieval historical cultures.