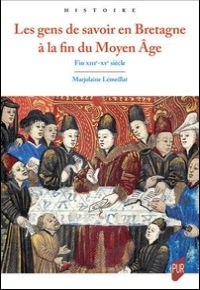 As the author notes at the beginning of her Introduction, approaching the question of 'gens de savoir' or 'men of learning' in the late Middle Ages from the standpoint of a specific region has not been done. Given its sometimes separate cultural and linguistic identity from the rest of France as well as its important contribution to intellectual life at the University of Paris, especially in the first half of the fourteenth century, Brittany is particularly well-suited for such a study. Work has been done on individual figures, but there has not until now been an attempt to bring them together as a group, to survey their educational formation, and their impact on the intellectual, religious, and cultural life of France from the late thirteenth to fifteenth centuries.

Lémeillat's book is divided into two chronological sections: 1250-1370 and 1370-1491. The first chapter includes an extensive survey of the educational resources in Brittany, from parish schools and family tutors up to cathedral schools. Higher level studies in theology and law for secular students were available in cathedral schools, and for those in religious orders in monasteries and mendicant convents in Brittany. The universities of Paris and Angers were the major places for study outside Brittany, with Paris by far the more dominant from the late thirteenth to the mid fourteenth century (75-83%), dropping to equal numbers with Angers in the second half of the fourteenth century because of an increased interest in civil law and notarial skills. Although Orléans offered training in civil and canon law, it never attracted the numbers of Breton students that Angers did.

The author covers the full range of studies, including arts, theology, law, and medicine. Particularly noteworthy is her discussion of the four colleges at Paris founded by Bretons in the first quarter of the fourteenth century: Cornouaille, du Plessis, de Tréguier, and de Léon. The end of the thirteenth and the first half of the fourteenth century was the high point for the creation of colleges at Paris, including the collège de Navarre. From the standpoint of regional representation, the Breton foundations form a remarkably significant percentage.

Chapter two explores the ecclesiastical, governmental, and professional careers of Bretons, many serving in bureaucratic and judicial offices, several elected or appointed as bishops in Brittany. Chapter three concludes the first section with an examination of family ties and personal aspects, including personal goods and property, post-mortem legacies and foundations, and tomb epitaphs.

Section two, covering the period 1370 to 1491, has a similar structure. In chapter four it covers elementary educational opportunities in Brittany during this period, theological instruction, and the increase in university students from Brittany across France, especially at Angers. Her analysis of the educational routes taken by 2,574 Bretons in this period is presented in tables arranged by discipline and degree. As in the first section, information on individuals helps ground statistics and percentages in real-life examples. That chapter ends with an examination of the university rotuli, or supplications to the pope for benefices, which grew in number at the beginning of the papal schism and expanded to include students in addition to masters and bachelors.

Chapter five traces the careers of university-trained Bretons in France in this period, but more extensively within the duchy of Brittany. It covers ecclesiastical careers, ducal service, and judicial and notarial activities. Acknowledging the advantages of nobility and the importance of clientage networks for successful careers, the author highlights the success of certain non-noble families, such as the Le Marhec and du Breil.

The last chapter returns to the 'personal angle', namely family networks, property and possessions, personal libraries, writings, legacies and foundations, as well as tomb sculptures and epitaphs. At the end, the author raises the question of whether this intellectual elite can be considered a 'fourth estate'.

Lémeillat's Les gens de savoir en Bretagne is a monumental achievement, particularly noteworthy for its range and depth of analysis. The numerous schematic tables as well as those listing university masters in various disciplines in chronological sequence will be especially useful. Unfortunately, a number of errors have crept into the work that need correction, lest they misinform. On p. 51 it is claimed that Alain Gontier read the Sentences in 1295. As of that date he was simply a student in theology at the Sorbonne and only became a bachelor of theology, reading the Sentences, late in the first decade of the fourteenth century. Moreover, he is incorrectly listed as a regent master in medicine on p. 65 and in table 8 on page 66, although his only doctoral degree was in theology, as acknowledged elsewhere in this first section. The teaching career of Raoul le Breton, listed correctly as a master in theology in table 7, p. 66, is given as 1315-1320. His teaching career as a theologian actually began around 1311. Although he may have continued to lecture in theology in 1315-1320 while serving as Provisor of the Sorbonne (an office not mentioned by Lémeillat), that is not certain. Finally, the important Breton Franciscan theologian, Aufred (Alfred) Gontier, presumably a relative of Alain Gontier and active at Barcelona and Paris in the 1320s, is not included in the book, although she does mention (145) a secular master of the same name who was a canon and archdeacon at Quimper (1335-1337), and included in her bibliography Jean-Luc Deuffic's note, "Alain et Aufred Gontier: deux maîtres bretons cornouaillais du xive siècle," posted in Pecia (2008), which discusses Aufred Gontier, the Franciscan theologian. [1]

It is to be hoped that other regions of France, for example Picardy, the Auvergne, the Limousin, or Narbonne might be treated similarly, since this regional approach to university-trained scholars reveals the family and patronage networks that facilitated academic study as well as their later ecclesiastical and professional careers.