Jeanne E. Grant: For the Common Good. The Bohemian Land Law and the Beginning of the Hussite Revolution, Leiden / Boston: Brill 2015 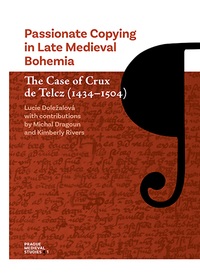 What is known about Crux of Telcz in the Anglophone world would scarcely fill the proverbial historiographical thimble. The details of his life and career can only be known by means of a painstakingly arduous process of connecting dots (with quite a few missing) across a scattered patchwork of manuscripts, colophons, subscriptions, and marginal notes. Some of the more fruitful repositories, like the Prague Castle Archive, still await thorough investigation. His biography can be pieced together from a pastiche of more than 150 remarks brought together from twenty-eight manuscripts wherein we find autobiographical information here and there in the colophons and marginalia of the manuscripts in which he left an imprint.

What can be gleaned from research thus far may be summarised as follows: Kříž z Telče was a Czech scribe whose life spans the period between 24 December 1434 and 25 March 1504. Since the eighteenth century he has been confused with another Oldřich Kříž z Telče and is often referred to thus in modern Czech research. Our Crux of Telcz was once the parish priest at Nepomuk but this comes later. We know practically nothing about the first two decades of his life. Traces of his peripatetic early career appear in connection with schools at Žďár nad Sázava, Soběslav, Roudnice nad Labem, Telč Vyšehrad, and elsewhere. He had some association with Charles University in Prague and can reliably be situated in Prague Castle by 1463 and thereafter is found at Plzeň and Planá. He was involved in preaching and serving at the altar in several locations. He lived in the aftermath of the Hussite uprising when Bohemia was riven by strife and religious controversy. By 1478, he had become a canon in the Augustinian house at Třeboň where he remained for the last twenty-six years of his life.

The life of Crux is neither especially exciting nor notorious but his activities shed considerable light on the wider culture of the later Middle Ages. Crux was a professional copyist and a hired scribe. His work is important for its prodigious scribal activity and the intensity of that work. Lucie Doležalová argues that the hand of Crux can be evidenced in no fewer than fifty-four codices. He wrote more than 4,300 folia while his notes and glosses account for at least twice that many folia. He also translated texts, wrote original works, acted as a glossator, edited additional works, and collected writings and texts. His frenetic activities are responsible for the preservation of many Czech and Latin works. When he entered the Augustinian house at Třeboň in 1478, his personal library, which must have been substantial, was amalgamated into the collection there. The location of the Augustinian house proved fortuitous for it was protected by the powerful Rožmberk family who were staunchly Catholic and resisted the wave of Hussite religion that came to national prominence in the aftermath of the execution of Jan Hus in 1415. Unlike many other religious houses in Bohemia that were sacked during the crusades and the Hussite wars, Třeboň was not subjected to the iconoclastic ravages of Hussite warriors. In consequence, much of its medieval library survives and is the largest preserved monastic library from the medieval Czech lands.

The 'passionate copying' of Crux of Telcz reveals a plethora of instructive insights that enable the scholar to better understand the nature of medieval texts, the process of transmission, and the reliability of those writings that emerge from the dimness of the medieval past. What Lucie Doležalová and her collaborators reveal is a culture well understood by specialists who have worked with medieval manuscripts, studied their transmission, produced critical editions of texts, or identified recensions of textual histories. Those who have not been submerged in the archives or have relied upon single texts will benefit from the critical and careful assessment of Crux. Copying was neither an exact science nor a precise process. Medieval copies of texts are sometimes so fundamentally different that it is possible to regard some copies as entirely new works. The medieval scribe, and Crux of Telcz was no exception, functioned as a co-author in the sense that he interpreted the texts he copied and, in that process, contributed to its meaning or in some cases altered it to read something rather different from the intention of its original author.

The work of Crux of Telcz shows beyond doubt that the relation between the original version of a text and a scribal copy may be blurred beyond recognition. The extent of this process is impossible to fully describe or elaborate since the autograph is often no longer extant. Where we can identify an original text a comparison with scribal copies reveals additions, omissions, corrections, alterations, along with colophons, subscriptions, and marginal notes that influence the meaning of a text sometimes in radical ways. Scribes like Crux of Telcz occasionally shifted word order, introduced spelling variants, changed a word, left some words out while introducing new words. The use of a synonym, a change of tense, alterations of pronouns, conjunctions, prepositions, prefixes, or scribes poorly equipped with facility in Latin grammar altered meaning. Many medieval manuscripts are intrinsically confusing in terms of abbreviations and letter forms and the peculiarity of personal hands.

In his 1454 copying of a fourteenth-century text on the essential aspects of the Christian faith by Thomas Hibernicus, Crux changed the word order sixty-four times, made forty-eight additions, introduced 104 omissions, and was responsible for 194 word changes. More curious is the fact that the scribe added a unique passage at the end of the text. The author had advised the reader to know the Creed, obey the Ten Commandments, avoid serious sins, and take heed to spiritual authority. Crux appended his own advice: "Against every vice you can, o man, expect a conflict and become the winner, except against a woman alone. Why? Because it is she who makes fools of wise men, destroys saints, conquers the strong" (84). Here we see scribal creativity. As Doležalová makes amply clear, Crux of Telcz rarely makes straightforward copies: He actively contributes to textual transmission.

In her research, undergirding Passionate Copying in Late Medieval Bohemia, Doležalová focuses solely on Crux of Telcz and endeavours to identify his intentions as a medieval scribe and situate him within the fundamentally important manuscript culture of the Later Middle Ages. What Passionate Copying in Late Medieval Bohemia reveals is that Crux is too complex to be reduced to a single category but his imprint on the manuscript culture of Bohemia suggests both limitations and possibilities for future research. Doležalová can neither write an exhaustive study nor answer all of her own queries for the simple reason that silence and textual lacuna make that impossible.

Passionate Copying in Late Medieval Bohemia tells us much about a single obscure scribe but suggests valuable clues for much more. There are useful glosses on texts by Jan Rokycana (though not in Crux's hand!), and a curious intervention on the controversial speech delivered by the papal legate Fantinus in 1462 before King George of Poděbrady which landed him in prison on charges of treason. Crux also provides an interesting appendix to the myth of Jan Hus, exposes 'false memory' and incurs the wrath of faith communities that cannot bear the weight of critical inquiry into foundational assumptions. Of signal importance is the argument and evidence that demonstrates how Crux (and scribes in general) endeavoured to control reception or how readers should read and understand the text. Correcting obvious or assumed errors, orientating a text to guide a reader, adding additional information, filling empty spaces with material not germane to the original argument, and actually prescribing how to understand the text are all ways and means employed by Crux as a glossator.

A consideration of Crux tells us much about late medieval classrooms, the puzzling problems with riddles, and the almost inevitability of unstable manuscript traditions and transmission. Doležalová is clear that her analysis is based on selected examples and that more work is required to resolve or more fully illuminate the case of Crux of Telcz. The volume features 125 pages of appendices of full text editions of Crux's work, his manuscripts, the Franciscan Johannes Sintrams's manuscripts and colophons (used as a comparison to Crux's scribal habits and persona), and a comprehensive list of all colophons in Crux's hand. Most of this book has previously appeared in Czech but its English publication will bring this valuable work to the attention of a broader audience.