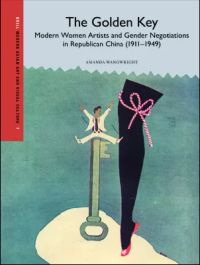 In The Golden Key: Modern Women Artists and Gender Negotiations in Republican China (1911-1949) , Amanda Wangwright examines the role of female artists in the context of social change, modernization, and developments in twentieth century Chinese artistic culture. She introduces the book's key discussion in the introduction by highlighting the lack of art historical scholarship on female artists not only in China but in modern Asia and addresses fundamental issues facing female artists in Chinese history, such as women's rights. Despite the New Women's Movement (c. 1910s-1920s) that gave Chinese women freedom to pursue education and careers, professional options were scarce. Women in the workplace were often treated as decorative objects and not as the equals of their male colleagues. Wangwright shows in four chapters, whose goals are clearly laid out, how female artists responded to these challenges through their practice in a thriving culture of exhibitions and artistic manifestos, epitomizing new womanhood and new art.

Chapter one 'A Beacon in the Distance' examines the painter Guan Zilan (1903-1985) who skillfully used her privileged family background and social network as well as her artistic talent to build a desirable professional identity. Coverage of Guan's works in popular journals such as The Young Companion and The Modern Lady is used to illustrate not only Guan's artistic talent, but her acute awareness of celebrity and the instrumental role print media played in the promotion of art and artists at the time. Cover images and editorial features that present the artist's paintings and photographic portraits of her are discussed in detail. Wangwright's analysis of Guan's work and her public profile reveal the artist's self-fashioning. Visual materials illustrated in this chapter offer a deeper understanding of the professional aspirations and social standing of early twentieth century Chinese female artists.

Chapter two entitled 'By Any Other Name' examines Qiu Ti (1906-1958) through her work Flower (c. 1933) that won the Storm Society Award in 1933. The painting and Qiu's participation in the Society are closely scrutinized and her work is compared to that of some of her peers to gain a better understanding of Qiu's career trajectory and to correct misassumptions. Wangwright questions Storm Society spokesperson Ni Yide's (1901-1970) essay on Qiu that deliberately misrepresents her as the only female member in the Society. While seeming to elevate her position by doing so, his account limits her contribution to the Society and her artistic talent. Like Guan Zilan, Qiu Ti shaped her public persona carefully, often emphasizing her role in the Storm Society. Wangwright meticulously traces her participation in the Society through her exhibited works to demonstrate the strategies she applied to position herself in a male-dominated profession.

The next chapter 'Nude Ambition' explores the representation of the female nude as a modernist ideological subject in Chinese painting discourses and as a motif whose use served to raise the professional profiles of female painters. The Chinese appropriation of the distinctly European genre also articulated a dilemma encountered by modern women, as illustrated by the cartoon 'The Convenience of Female Painters' in Arts & Life featuring a woman in her studio looking into a large mirror as she paints herself in the nude. The satirical image highlights contemporary anxieties over women's agency, subjectivity, and the representation of sex appeal. Wangwright considers the correlation between the female nude and gender issues by examining other media such as photography and writing. For instance, photographs featuring socialites that emphasize feminine physical features that question the authority of the male gaze. Writing by female artists, including the oil painter Tao Cuiying (n.d.), offers insightful perspectives on the female body, which the author believes encouraged women readers to reflect on their own identities and social roles. Wangwright discusses the experiences of European and Japanese female artists to compare the obstacles they encountered in their professional careers. Pan Yuliang (1895-1977), known for her diverse portrayal of female nudes, is discussed in the chapter but not extensively examined, probably because the author is aware that there is a monograph on the artist that scrutinizes Pan's works closely. The chapter concludes with the decline of the genre because of the rise of conservative standards and new social expectations for women to serve as a moral compass ahead of the Sino-Japanese War (1937-1945).

Chapter four 'Embattled Careers' opens with a discussion of the demise of professional opportunities available to female artists on the eve of the second Sino-Japanese War. Faced with daily shortages of basic necessities and under constant threat of attacks, they had no choice but to focus on taking care of their families. Qiu Ti endured hardships as a refugee that curtailed her career, which was typical in this period. Wangwright focuses on the careers of Fang Junbi (1898-1986), Liang Baibo (1911-late 1960), and Yu Feng (1916-2007), who enjoyed success before World War II but the socially conservative New Life Movement (1934) and the wartime emphasis on patriotic duties altered their career trajectories. Fang Junbi came from a privileged background, was successfully exhibiting her works during her studies in France, and enjoyed a blossoming career before the war. She emerged as a patriotic widow guarding the legacy of her husband Zeng Zhongming (1896-1939) and maintained an active professional life with numerous exhibitions and interviews that asserted her individual accomplishments. Yu Feng metamorphized from a fashionable modern painter to a patriotic one, participating in the resistance movement as a cartoonist and reporter. Liang Baibo continued as an oil painter and produced magazine covers, cartoons, and story illustrations as a member of the Cartoonists' Association for National Salvation. Both Yu and Liang contributed to the war effort through political cartoons. Their patriotic activism justified their careers outside the home when the 'Good Wife and Wise Mother' doctrine was in full swing.

A thoughtful account of the post-war careers of the female artists in the final chapter 'Under the Power of the Times' examines the last years of the women's productive and turbulent lives. Pan Yuliang and Fang Junbi remained committed artists in their voluntary exiles in Europe and Qiu Ti and Yu Feng dedicated themselves to government sanctioned artistic practices and reinvented themselves as designers in the Dress Reform Campaign that guided the development of Chinese women's clothing. Wangwright concludes the book by discussing the demise of art societies and the lack of recognition of women's contribution to modernist artistic developments. Female artists were often portrayed by their own peers as playing minor roles; their works deemed secondary or dismissed as 'a decorative taste'. Their accomplishments have been largely marginalized or overlooked by history, even by contemporary art historians. Wangwright reflects on the obstacles female artists encountered in China and in France and Turkey and highlights the devaluation of their careers and professional contributions as a cross-cultural phenomenon that is currently being addressed in scholarship and art exhibitions.

Modern Chinese art is an area of research that has been much explored but studies specifically on female artists are still few and far between. Wangwright has selected rarely published materials such as editorial features and photographs to enhance her discussion. Each chapter is well-illustrated with meticulously analyzed illustrations. She examines female artists' participation in modern art societies and the artistic community at large, revealing new insights that clarify the correlation between artistic identity and art production. The narrative that connects the chapters makes good sense and the female artists examined in this study demonstrate resilience, passion for their art, and dedication to their careers, even in the most difficult times. This book is an excellent addition to studies of modern Chinese art and brings much-needed attention to female artists and their contribution not only to artistic development but also to issues of marginalization.