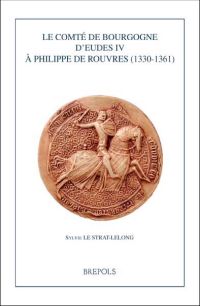 A considerable number of research projects addressed a wide variety of questions that the so-called "Burgundian century" (1384-1506) poses to historians. While the Valois dukes (including the Duchess Marie and her son, Philippe le Beau) have been studied in almost all aspects of their actions as rulers, we know comparatively little of the previous rulers of the Duchy of Burgundy.

The author aims to evaluate Eudes IV's (1295-1349) and Philippe de Rouvres's (1346-1361) impact on the formation of the new Duchy of Burgundy. The acquisitions of new territories, notably Franche-Comté and the county of Artois, re-shaped the old Capetian fiefdom and placed its holders amongst the most powerful nobles in France. [1]

The research is very well documented and a substantial part in the foreword focuses on sources. The author rigorously examines accounts, lists of vassals, cartularies, and almost every other archival material conceivable. The result is a clear enumeration of archives and typologies, which helps the reader in understanding the investigation's underlying complexity. We must also give the author credit for the inclusion of several geographical maps, genealogical trees, and diagrams that are essential to the comprehension of the data presented in each chapter. The bibliography is up to date and also includes old works which turned out to be useful for the present study.

There are three core topics in the book: the formation of the Duchy, the nobility, and the organisation of princely power. The four parts with their twelve chapters break down the three subjects into many sub-topics: officers and their contribution to the balance of power, feudal contracts, revenues and expenditures, military organisation, ducal rights, legislation. Le Strat-Lelong devotes a great number of pages to sources of revenue and land ownership: this ensures that power relations between different political actors are considered with an emphasis on material capabilities. This is something that has lately being overlooked, now that most historiographical trends and schools favour other points of view, but trends are fleeting and thoroughness is forever: the reader will surely appreciate the author's effort to paint a complete picture of the tangled situation the dukes faced.

The formation of the Duchy does not pose theoretical difficulties to the historian. As in many other cases, the territories under Eude's rule were agglomerated bits inherited through marriages, dynastic alliances, and purchase; Le Strat-Lelong deals with the issue exhaustively in the first two chapters.

A more intellectually demanding theme is the organisation of those lands which fell under ducal rule. The situation was further complicated by the Hundred Years' War and the difficult relationship with the king of France; Le Strat-Lelong does not forget to take these factors into account. The author presents the administrative system inherited by Eudes IV for what concerns both in terms of domaine eminent and domaine utile. This distinction makes undoubtedly clearer the overlapping of offices with their revenues, personnel, and responsibilities. The author sees a strong connection between power struggle with the nobility and the reorganisation carried out by the dukes: the arguments brought forward are extremely convincing. The parts concerning the consolidation of the groups of ducal officers owe much to previous studies on other French duchies and Italian states (e.g., Olivier Matteoni's work on the House of Bourbon, Guido Castelnuovo's investigations of the Duchy of Savoy, and Isabella Lazzarini's books about Mantua under Gonzaga rule).

Its many merits overshadow the few debatable points of this study. For example, the general approach given in the introduction (and reconfirmed in the conclusions) and its discrepancy with contents and methodologies of individual chapters may confuse the reader. Two "historiographical myths", i.e., centralisation and modernisation, are applied as heuristic tools to place the interweaving of the three core topics into a wider context. These concepts have contributed to the creation of a teleological narrative which considers every administrative structure as a more or less evolved step along the path towards the modern state or the post-Napoleonic state. This grand narrative has been so powerful that even contemporary historiography often struggles to get rid of it. In the opinion of many scholars, "modernisation" is not a viable choice anymore as a tool for understanding a phenomenon by itself.

The idea of centralisation, while not inherently wrong, needs a lot more context and details to be used profitably: the author has decided to go with the flow of recent scientific literature which emphasises the Valois century as a decisive moment towards the construction of a centralised state. Historiography on the Valois Burgundian state (or states?) sees every interaction between the dukes and their subjects as part of a larger strategy whose aim was to create a "modern state" that never existed. This is a key topic recently studied by Elodie Lecuppre-Desjardin, who focused on cultural aspects of the strategy in her book "Le royaume inachevé des ducs de Bourgogne". A more suitable concept would be "the making of territories" (an idea that Italian, German, and French scholars of the early modern period have largely employed) and Le Strat-Lelong clearly refers to it several times in the first four chapters.

The author's use of these profitable concepts seems incongruous with the larger picture inherited from a somewhat conservative bibliography. A final critical assessment of existing literature would have been more compatible with the spirit of the core chapters and the information presented therein.

The confusion, however, is limited to those few pages containing general assumptions and conclusions. The author has carried out a meticulous study and these small inconsistencies do not alter its high value, as already stated. The book is an essential work for anyone wishing to further investigate Burgundy and France in the XIVth century.