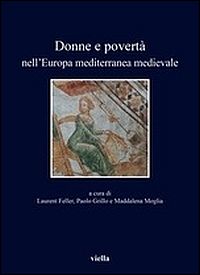 In recent times, scholarship on women and gender in the Middle Ages has grown more and more intersectional. By embracing arguments coming from sociological studies, mediaevalists have increasingly grounded their considerations on the crossing of women's and gender history with other categories of analysis, such as religion, ethnicity, class, age. [1] This new approach offered the chance to enhance the understanding of women's roles, the construction of sex and gender representations, and the ways in which these processes were entailed by and impacted on changes affecting other categories. New sources, both written and material, have been investigated. Much richer and more nuanced pictures of women's roles and possibilities have been produced.

The volume edited by Laurent Feller, Paolo Grillo and Maddalena Moglia places itself in continuity with these developments. Women, that most societies locate on the subordinate end of gender balances, are investigated here in connection with another condition of subordination, namely, the lack of economic and social resources. The connection between women and poverty, women's possibilities when facing poverty and images of poor women as people to take care of are the perspectives shared by all the authors. The geographical scope is extended to the Western Mediterranean, with a special focus on Italy. As Laurent Feller underlines in his introduction, "[l]e but du présent ouvrage [...] n'est pas de s'insérer dans la problématique déjà bien construite des gender studies, mais d'aborder une série de questions laissées dans l'ombre par notre recherche et dont nous pensions qu'il était nécessaire de les aborder pour offrir de la pauvreté une description plus exacte". (7) This is not a book on gender, but rather on women's history. Even though comparisons with ideas and conditions of men in poverty are sketched in several contributions, it is clear that focus is first and foremost on (poor) women. The reasons that could lead women to poverty, social representations of their condition, and poor women's agency are the issues that most consistently emerge throughout the volume.

The editors conceived a threefold structure, whose sections are nonetheless strictly intertwined. Section 1, Vulnerabilità, collects four papers focusing on the material reasons of, and narratives on, poor women as especially needy and marginal figures. Early medieval pauperculae, as highlighted by Cristina La Rocca, appear as a multi-faceted and highly flexible category, "dove elementi quali la povertà materiale, povertà intellettuale e disabilità fisica si incrociano". (25) As passive objects of discursive constructions shaped by others, the pauperculae were attributed with different functions, both good and bad, according to the specific needs of each text. The language of marginality equally characterizes the 14th-century Bolognese women studied by Cristina Arcari. In their petitions to the Pepoli lord they took advantage of the vocabulary of subordination that patriarchal society developed for them. Social pressure could in fact be lower on poor women, conceived as inherently weak and in need of protection, than on poor men. The latters were seen as responsible of their own misfortunes, as underlined by Anne-Pauline Jarry and Didier Lett. In all these cases, as well as in that of Barcelona analized by Mireia Comas-Via, loneliness, marginality, and widowhood appear as the key reasons for poor women's vulnerability.

Poor women's agency and attempts to relieve their conditions are at the core of Section 2, Tutele. The study by Lidia Zanetti Domingues on late medieval Siena has much in common with the one by Arcari in both the sources considered (petitions, criminal justice) and results. The "uso strategico della voce femminile" (112) and gendered vocabulary is one of the key tools deployed by petitioners to achieve their goals. The urban landscape offered semi-public solutions to poor women (and men)'s needs by the means of hospitals and confraternities. Giuliana Albini argues that "il circuito ospedaliero e quello confraternale si intersecavano e, insieme, contribuivano a creare un sistema assistenziale" (122), yet one may wonder how 'systematic' such a system could be, provided that "la discrezionalità nell'assistere le donne era sempre di più correlata ad una valutazione della loro moralità". (138) Other, more informal networks of assistance were required and developed. Denise Bezzina thus focuses on family and kinship structures as mirrored, but also shaped, by dowries and women's wills in late medieval Genua. Even though they could not be enough to prevent poverty, their absence automatically entailed marginalization. Finally, spaces of agency could open where one could never expect to find them. Beatrice Del Bo claims that slavery, especially when ties of affection were established between a female slave and her master could be a better state than freedom, often no more than "una trasparente veste formale che non riusciva a coprire comunque una vergognosa e sostanziale nudità di diritti". (145)

One of the key ways for preventing to fall into poverty, work, is the focus of Section 3. The clearest change in female work between the early and the late Middle Ages, as underlined by Laurent Feller, is the introduction of salaries. This may entail better economic and social conditions for female workers, but also new ways of exploitation. Women working in rural contexts were relegated to carefully selected activities that did not involve the use of dangerous tools. Feller rightly underscores a general standpoint: "L'épouse d'un paysan pauvre éprouve, quel que soit son statut juridique, l'accumulation des infériorités: être femme, être épouse, être éventuellement serve [...]". (185) Women workers were usually paid less than men, even when their contribution was essential for specific productions, such as the olives in the plains around Sevilla, studied by Jesús Garc&#237a D&#237az. "[A]s&#237 pues, la impresi&#243;n que se desprende de la situaci&#243;n laboral de estas mujeres es la de una gran indefensi&#243;n". (233) Late medieval urban contexts, such as the case of Treviso investigated by Matthieu Scherman, reflect an even higher degree of gendered division in working activities. The close relationship culturally established between women and duties of care was at the ground of female occupation in hospitals.</p> <p>The final remarks by Paolo Grillo and Maddalena Moglia recall the key issues recurring throughout the volume. In medieval times poverty was a real possibility for women who lived alone and could not count on networks of mutual assistance. Widowhood, that is, the loss of male protection, was frequently the first step toward a downfall in their economic and social conditions. Medieval societies were active in providing more or less effective responses to their needs. Probably even more than that, the social contexts in which poor women spent their lives were keen to develop representations of these women's roles in the maintenance of social stability and hierarchies.</p> <p>This book is a valuable contribution to the history of poor women in the (mostly late) Middle Ages. One of its highest achievements is the stimulating dialogue established between young and already affirmed scholars. Individual authors' considerations are grounded on a critical approach to the sources. The possibilities for comparison between different contexts are clearly pointed out. Yet some issues equally need to be underlined. More careful editorial work, a final bibliography and richer indexes would have been appreciated. Chronological coverage is strongly unbalanced in favour of the late Middle Ages. More importantly, the very idea of poverty as conceived in this book can be puzzling. Denise Bezzina rightly suggests that "[q]uello che osserviamo &#232; perci&#242; spesso una povert&#224; "relativa"". (163) But poverty is not only relative. It is also, and crucially, relational. [<a href="#fn2" name="fna2">2</a>] One is poor not per se, but because someone else is richer. In this book the relational nature of poverty is rarely tackled. Poor women are frequently isolated from the other social groups and classes. Their connections to the other levels of society are usually reduced to relationships of work or dependance. The danger is that of producing an image of social immobility. Further research will take advantage from the integration of the reasons of interest of this book with the rich historiography on social mobility in the Middle Ages. [<a href="#fn3" name="fna3">3</a>]</p> <p><br /><span class="underline">Notes</span>:</p> <p>[<a href="#fna1" name="fn1">1</a>] For instance Lisa M. Bitel / Felice Lifshitz (eds.): Gender and Christianity in Medieval Europe. New Perspectives, Philadelphia 2008; Cordelia Beattie / Kirsten A. Fenton (eds.): Intersections of Gender, Religion and Ethnicity in the Middle Ages, Basingstoke / New York 2011.</p> <p>[<a href="#fna2" name="fn2">2</a>] See now Victoria Lawson / Sarah Elwood (eds.): Relational Poverty Politics. Forms, Struggles, and Possibilities, Athens, GA 2018.</p> <p>[<a href="#fna3" name="fn3">3</a>] Sandro Carocci (a cura di): La mobilit&#224; sociale nel Medioevo, Roma 2010; Sandro Carocci / Isabella Lazzarini (eds.): Social mobility in Medieval Italy (1100-1500), Rome 2018.</p> <p class="italic" style="text-align: right">Francesco Veronese</p> </div> </div> </div> <div id="page_footer"> <div class="ie6_font_size" id="separator"></div> <p>issn 1618-6168 / www.sehepunkte.de <img height="10" src="/images/sp10.jpg" width="10"> </p> </div> </div> </body> </html>