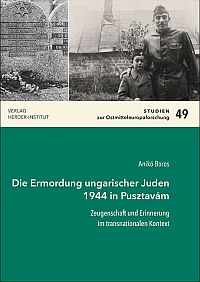 Anikó Boros' book is a welcome addition to the historiography of the Holocaust in Hungary, of Hungarian-German history, of memory culture, and of how to use testimonies as sources. It is a book rich in arguments, thoughts, and documentation.

The Holocaust arrived late in Hungary, but it arrived with a vengeance. Many studies of the Hungarian Holocaust focus on the deportations to Auschwitz in the spring of 1944 or on the various attempts to save Jews in Budapest, and more recently on the first Hungarian deportation of Jews, already in the summer of 1941, to Kamenetsk-Podolsk. There have been fewer studies of a massacre of Jews on Hungarian territory. [1]

Boros focuses on the mass killing in Pusztavám that took place on 16 October 1944. She examines who lived in the village (mainly Hungarian Germans), who the Jews were who found themselves there in 1944, and who was involved in the killing, as well as how people remembered and explained what happened after the fact. Pusztavám was a Hungarian-German village until the end of the war; the inhabitants were mainly members of the German minority (Danube Swabians who probably settled there in the eighteenth century). Like many Hungarian-German villages during the war, Pusztavám had a local chapter of the Volksbund der Deutschen in Ungarn (a National Socialist organization based in Hungary). In the autumn of 1944, two Jewish labor service companies were stationed in Pusztavám. These labor service companies consisted of Jewish servicemen who were compelled to serve the Hungarian military during the war. They were not soldiers per se; they were supposed to assist the army. When news arrived in October 1944 that the leader of Hungary, Miklós Horthy, was going to conclude a peace agreement with the Allies, the Jewish members of the labor service companies stationed in Pusztavám rejoiced. When the peace did not arrive and Horthy was removed from power and replaced with the leader of the Hungarian Arrow Cross, Ferenc Szálasi, more than 200 Jewish forced laborers in Pusztavám were rounded up and murdered.

After the war, several investigations were conducted in order to determine what had taken place in Pusztavám and bring those responsible to trial. Already in 1947 the Székesfehérvár People's Court reached a verdict, but the judgment was not enforced and those involved were not identified. Instead the memory of the mass murder in Pusztavám has been and continues to be "fought over, manipulated, and instrumentalized". (2) This is why there has thus far not been a satisfactory study of this massacre, and why this book fills a gap in the research.

In order to investigate this mass murder, and especially the memory of what happened, Boros has analyzed more than two hundred testimonies, thousands of pages of documents, and hundreds of articles, newspapers, and sites of remembrance. She approaches this material from the perspective of memory studies, seeking to demonstrate that the testimonies, many of which were originally collected as legal evidence, can also provide insight concerning larger macro events at the time the testimonies were collected.

In her analysis of the testimonies (this is the longest section of the book), Boros describes how such accounts are subject to the tension between fiction and non-fiction, as well as between trust and distrust. She also demonstrates how the interviewer was involved in framing and giving meaning to the testimonies.

An important aspect of Boros study is the competitive victimhood that is evident in the testimonies. Several Pusztavám witnesses presented themselves as victims of Volksbund activities during the war, thereby diverting attention from the victims of the mass murder. Hungarian authorities were also interested in focusing on the crimes of the Volksbund and Hungarian Germans, not necessarily on crimes against Jewish members of the labor service companies. Boros sometimes refers to these kinds of testimonies as opportunistic. The competition for interpretation was frequently between explanations concerning escape, expulsion, and the Holocaust. This resulted in a lack of investigations - or at least of thorough ones - into the history of the mass murder of Jews in Pusztavám.

A new kind of testimony began to appear with the video interviews carried out by the Shoah Foundation's Visual History Archives at the University of Southern California. [2] Now the interviewers' questions could be heard, and gestures, narrative speed, and style could all be seen. There were new aspects to interpret, as well as new ways to analyze the testimonies concerning the mass murder in Pusztavám.

This is a very important book; one that deserves to be read by a wide audience. Scholars and students interested in the Holocaust in Hungary and the Holocaust in general will find this study fascinating. It should also be read by individuals interested in both Hungarian-German history and Hungarian as well as East Central European history more generally. When this reviewer conducted research on the Hungarian Germans, it was quite difficult to find material on Hungarian Germans and the Holocaust. This book provides a starting point for further research and should also spark a more thorough conversation about what scholars can learn from such testimonies.