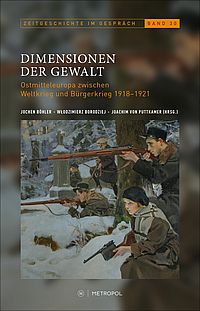 This collection of essays is devoted to the "long end" of the First World War in Central Eastern Europe and the violence raging in those regions into the 1920s. Here, the war did not end in 1918, but was transformed into new violent conflicts. The editors suggest "Central Eastern European civil war" as a conceptual framework to capture the phenomena in question. On the one hand, like Ernst Nolte's "European civil war," this concept refers to the underlying opposition between Bolshevik or "red" revolutionists and "white" counter-revolutionists which fed many of these conflicts. On the other hand, it refers to the simple fact that the struggle for new nation states and their territories turned people who had lived for centuries as rather peaceful neighbors in the Romanov and Habsburg empires into lethal enemies. The concept indeed mirrors the common ground of the articles quite well; however, the authors refer to it implicitly at best. The contributions can be grouped according to the following themes: peasantry, victimization of the weak, and workers' violence.

Victimization of the weak is a common phenomenon in civil wars, and women and Jews are prime candidates to be targeted in the European context. The contributions of Angelique Leszczawski-Schwerk and Emily Gioielli provide further empirical evidence for this with the example of Polish female soldiers and Hungarian Jews respectively. In the Polish case, we see women not only as victims, but also with a degree of agency. This is not unheard of in the context of irregular wars, and examples from the Russian Civil War could be added. The white Hungarian terror against Jews seems to be very much in line with patterns of counter-revolutionary violence in the period, if more restrained according to the circumstances than in comparison, say, to Ukraine.

Jochen Böhler and Christopher Gilley discuss in their contributions peasants in Poland and Ukraine respectively. Böhler routs the typical nationalist myth of peasants as the bearers of national consciousness and the popular basis of the new emerging states in Central Eastern Europe. These myths have been cherished, even by many historians, until this very day because without considering peasants, there cannot be much talk about the nation, since they represented the overwhelming majority of the population. With the example of Poland, Böhler demonstrates that the peasants were not enthusiastic about the national elites' message; they were often even not responsive at all, and were usually reluctant to take up arms for the national cause. This confirms what Ernest Gellner wrote about peasants and the nation, [1] and reminds the reader that peasants often displayed what Alf Lüdtke called "Eigensinn," a world view which is partly incommensurable with that of the elites. [2] Similar vibes emerge through Gilley's analysis of ideologies and slogans among Ukrainian peasant insurgents during the Russian Civil War. Language from the time that sounds alien at first glance becomes more meaningful if we scratch the surface, and view it through the lens of the peasants' "Eigensinn." Gilley invites us to understand the function of these messages rather than their literal content. This probably means to interpret and to translate them as Orlando Figes and Boris Kolonitskii do in their studies about discourses and symbols in the Russian Revolution. [3] There is no question that language played an important role during the period, as it usually does in human affairs. However, whether "fighting words" can serve as causal explanation for violence as the author seems to suggest is another question. There is not even a causal relationship between intentions and actions, and consequently even less so between words and actions. After all, the effect of words depends on the context in which they are uttered, so words alone do not cause anything, and we are referred back to a holistic understanding of complex social processes.

Different social spaces yield different forms of violence. And where a state is present and effective in practice and in the minds of the people, violence is usually not the first option, as Włodzimierz Borodziej and Maciej Górny demonstrate in their study of workers' milieus. This does not mean that violence is completely absent, but rather that it does not shape the situation and often remains in the form of threats. In a way, constellations like these are even more interesting for the study of the phenomenon than those where violence dominates the options of action and seems to 'reign' as a principle.

Jörn Leonhard's essay on the "ruptures of experience" and the "change of the form of violence" analyzes the impact of the First World War in a global perspective. We see new forms of organization, new levels of institutionalization, and new forms of ideological legitimation of violence; in Europe, we see an overall higher level and intensity of violent practice, more internal violence based on the "rule of suspicion," and last but not least, a higher mental preparedness to implement change in violent ways compared to pre-war conditions. The First World War sent shock-waves far beyond 1918 and Europe, and this seems to be its new quality, only shared to a degree with the effects of the French Revolution.

The title "dimensions of violence" is certainly well chosen. The contributions in this collection capture the diversity of the phenomenon of violence in general very well, and particularly highlight its complexity in post-First World War Central Eastern Europe.