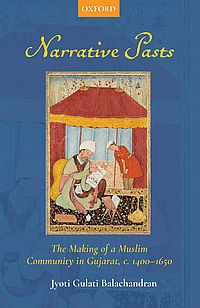 Narrative Pasts begins with the author's encounter with a man from Mangrol in Gujarat, in possession of a genealogical chart which connected him and his family to the Prophet by linear descent. Two members of this family caught the author's eye: Sayyid Siraj al-Din Muhammad 'Shah-i Alam' (d. 1475) and his father Sayyid Burhan al-Din 'Abdullah 'Qutb-i Alam' (d. 1452). Texts produced in the seventeenth century by their descendants channelled the historical memory of these fifteenth-century Sufis, as well as Shaykh Ahmad Khattu (d. 1445), and the author argues that each retelling resulted in episodes that in turn became part of the historical repertoire of deeds highlighting the Sufis' piety and charisma, and in doing so explores the narrative power of texts, especially in creating communities. Jyoti Gulati Balachandran uses not only rich archival material, but also her first-hand experience of witnessing the present generation of descendants involved in preserving the textual memory of their fifteenth-century ancestors as well as of contemporary practices at tombs.

Alongside the narrativisation present in histories of the state, the communities of Ahmad Khattu, Burhan al-Din 'Abdullah, and Siraj al-Din inspired the creation of a texted past in which Sufis, not Sultans, were the axis of the community that formed and prospered in fifteenth-century Gujarat. Balachandran traces the modern (re-)creation and consolidation of a regional historical memory to various narrative moments in time, arguing that these narrative articulations of the past in the fifteenth century were integral to the making of a Muslim community in Gujarat with its unique history and identity, and follows the narrative structure, intent, and content of a number of texts, which, read together, disclose a story of the family and followers of the Suhrawardi Sufis in Gujarat as they sought to accord a pre-eminent place to the Suhrawardi family in the history and memory of the Gujarat Sultanate. This increased narrativisation was also linked to the expansion by the Gujarat Sultans, which had significant implications for the settlement of Muslims.

After a broad introduction which lays out historiographical and methodological concerns, as well as the author's plan to tackle them, the first chapter tracks the fragmented and un-integrated pre-fifteenth century history of Muslim migration and settlement in Gujarat, studying on the one hand local inscriptional records and on the other, the early chroniclers who did not pay much attention to local details and conditions. The author postulates that the formation of new states under the Gujarat Sultans and the making of a Muslim community ministered by Sufi preceptors together shaped the textual articulations of the history of the Muslim community in Gujarat. Acknowledging the new intellectual reflections in the tawārīkh (chronicles), the book focuses innovatively on the textual oeuvre of the Sufis, as the Gujarat Sultans themselves often followed a deliberate policy of populating these cities with learned Muslim men to help administer local Muslim populations. Balachandran identifies the special kind of narrative articulation of the past which these Sufis, their descendants, and their disciples spearheaded, as being a decisive factor in the cohesiveness of Gujarati history.

The second chapter, which discusses the processes of creation and evolution of state, settlement, and texts, begins with a delightful description of the city of Ahmedabad, including not just the physical environs but information about the population and anecdotes about the Sufis consecrating the territory ruled by the sultans. This chapter explores the textualisation of Ahmad Khattu's spiritual dominion in the fifteenth-century texts, the Tuḥfat al-Majālis and the Mirqāt al-wuṣūl, which together made him one of the most authoritative Sufi preceptors of the time. Tracking the textualisation of the history of Ahmad Khattu's spiritual ministry in Sarkhej, wherein Sufis and Sultans were jointly credited with creating a political order with regional orientation, Balachandran argues that Ahmad Khattu's spiritual constituency was closely tied to the realm of the Gujarat Sultans in these two texts.

Texts and tombs represented conjoined processes that enabled ongoing community formation, and the third chapter concerns the participation of the Gujarat Sultans in the creation of a sacral geography through patronage, shrine veneration, and monumental construction, which the author sees as an expression of the intertwined processes of state, community, and region formation in fifteenth-century Gujarat. Through a study of the shrine-complex of Ahmad Khattu, Balachandran argues that the twin processes of textual production and physical enshrinement reinforced each other: the texts imported meaning to the physical space of the shrine complex and kept the memory of the Sufi alive, while the ongoing historical articulation of the Sufi's central role in turn made the Sultans' investment into the complex a desirable and honourable act, cementing their ties to the Sufi they had invited to settle in Gujarat. She postulates that perhaps it was the absence of a prominent familial descendent and spiritual successor that made it easier for the Gujarat sultans to shape the Sarkhej complex in their own unique ways, resulting in a space where respects to the Sufi and the former Sultans could be paid at the same time. This is a model that was later elaborated by Akbar in his construction of Fatehpur Sikri. The burial sites of Burhan al-Din in Vatwa and of his son in Rasulabad had a different trajectory altogether, since the courtier-disciples of the saint began construction, and Vatwa remained a site of familial investment, not royal interest. It was late in the sixteenth and seventeenth centuries when the Suhrawardi descendants of Burhan al-Din produced a corpus of literature about their fifteenth-century ancestor, laying claim to long-standing lineages, and Balachandran asserts that this acquisition of genealogical and generational depth among migrant families in Gujarat was critical in defining how the history of the Muslim community was retold in the second narrative moment in the seventeenth century.

The fourth chapter deals with networks of community formation and the genealogies of learned men in Gujarat which were a crucial link connecting the history of the Muslim community from the Gujarat sultans to the period of the Mughal occupation of Gujarat. Based on a close reading of taẕkirat (biographical compendia), the author argues that the Suhrawardi literary production was an assertion of a region in comparison to the imperial framework established by several Mughal scholars and that the Suhrawardi texts communicated the centrality of the Suhrawardi Sufis in defining the distinct path of a specific region. Acknowledging the difficulty of undertaking a comprehensive study of the familial and social networks of the Suhrawardis in Gujarat given the incomplete nature of many of the Suhrawardi texts that have survived, the author describes how the Suhrawardi descendants were very conscious of the prominent position they enjoyed in the region based on their lineage, learning, and social ties as well as the popularity of the tomb-shrines of their fifteenth-century ancestors. An important point she makes is that while in much of the Mughal-era biographical compendia the fifteenth-century Suhrawardis appear to be marginal figures, the Suhrawardi descendants in Gujarat - despite claiming the spiritual legacy of multiple lineages - never lost sight of their regional location and employed their texts to affirm the prominence of their regional Suhrawardi lineage. Compared to the fifteenth-century texts, Balachandran notices that the texts written in the seventeenth century focus increasingly on lineage and genealogy and that the authors had enough generational depth to reflect upon how their lineages fit into the expanding community of learned Muslim men since the fifteenth century. The combination of silsilah-i nasab (the chain of vertical biological descent from a common ancestor) and the formation of qabīlas (tribes) connected the different branches of the silsila (order) to one another and together comprised the most important unit of social organisation for mystically inclined men.

The fifth chapter deals with the historiographical resolution to the competing claims of fifteenth-century figures in Gujarat by Sayyid Safi al-Din Ja'far Badr-i Alam in the Ṣad Ḥikāyat. Safi al-Din created a long history predating the arrival of the fifteenth-century Sufis in Gujarat through an adaptation of earlier works and oral narratives, which was aimed at claiming the pre-eminent spiritual stature for the founder of his own lineage. While the fifteenth-century sources do not provide much information connecting Ahmad Khattu to his two disciples Burhan al-Din 'Abdullah and Siraj al-Din Muhammad, Safi al-Din reconfigured what, in Ahmad Khattu's texts, was a limited and incidental association, into a relationship in which Ahmad Khattu played a mediational role for a prophesised descendent of Jalal al-Din Bukhari, and in doing so he re-contextualised the shaykh's authority in relation to the history of the Suhrawardi Sufis in Gujarat. By disentangling the lives of three fifteenth-century Sufi preceptors, Balachandran follows the textual and material remnants as they were created, to excavate a history of the foundation and prosperity of the Muslim community in Gujarat in order to tell the story of how, by the seventeenth century, the narrative evolved into one of an illustrious ancestor from Uch who bestowed the political dominion of Gujarat on Wajih al-Mulk, the father of the first Gujarat Sultan Muzaffar Shah, while he granted the spiritual dominion of the region to Ahmad Khattu, though only provisionally, until the shaykh passed it on to Jalal al-Din Husayn Bukhari's great-grandson, Siraj al-Din Muhammad 'Shah-i Alam'. The mystery, history, and resolution is something that one must read for themselves and the sheer amount of information that Balachandran has marshalled must be commended, and can only fully be appreciated when one reads this chapter. A tidy conclusion sums up the author's views on narrativisation and the power of texts, followed by a short appendix with descriptions of the taẕkirat which are the major source material for this study.

Narrative Pasts is a story about how texts allow individuals who may be geographically distant from the centres of their ancestral settlements, to still be part of a community. The author has chosen two narrative moments within the corpus of Sufi literature which reflect the transition from a very localised identity around the middle of the fifteenth century to one that becomes increasingly regional over the course of the sixteenth and seventeenth centuries, tracing the significance of the memory and history of fifteenth-century Sufis in seventeenth-century Gujarat, and how such narrative remembrances were tied to modes of power, as well as the popular and royal patronage that burial sites received. The author examines the texts at two levels: prosopographically, to identify a wide range of networks among the learned men and secondly as material artefacts, where the very act of their production and transmission turned them into significant 'sites' where Sufi disciples and descendants created and debated the meaning of their past. The true beauty of the book lies in the recognition of many layers of historical narrative, and an understanding not only of their creation but also their effect. It is the weaving together of the perspectives of state and society, the political and the religious, the intellectual and the material, and the balance that Balachandran maintains between them that truly sets this book apart from other 'regional' studies. Even as she examines fixed narrative moments, Balachandran explores them in a diachronic manner in which the reader is made aware, while she discusses the fifteenth century, of what happened in the seventeenth, how it affected the historisation of the fifteenth in the seventeenth and even to the extent that she herself has observed it today. While it may be taxing for those unfamiliar with the history of Sufis in Gujarat to wade through all the names and thick descriptions of the contents of texts and the biographies of learned men, it is worth it because the author's skill with languages, with close contextual readings, and with organising disparate details out of vast and wide-ranging materials results in a book that is both empirically and methodologically sound, simultaneously informative and refreshingly interesting.