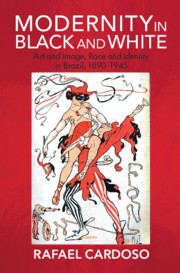 Traditionally, the birth of Brazilian modernism is credited to a group active in São Paulo mainly known for the so-called Antropofagia movement and the long praised Modern Art Week, which took place in 1922. In his latest book, "Modernity in Black and White", the Berlin-based Brazilian art historian Rafael Cardoso challenges this widely held account. As opposed to the habit of epitomizing Brazilian modernism in the small Paulista group, the author turns his attention to the fine and graphic arts at the turn of the 19th to the 20th century in Rio de Janeiro, at once decentralizing the debate in terms of both geography and media.

Among other things, upholders of Paulista modernism have also attributed to the movement the reclaimant of Brazil's African heritage. Cardoso argues, however, that the representation of black subjects was part of Brazilian culture way before the 1920s and that the Paulista conception of blackness was neither a unified nor affirmative one (13). In Rio, on the other hand, popular culture such as samba and carnival, along with modernistic experimentations in illustrated magazines, provided fertile terrain for the construction of Carioca identity and a unique modernism, which remained marginalized from Brazilian art historiography.

In the Introduction, Cardoso outlines the deconstruction of the "myth" (6) of Paulista modernism that animates the book. The movement's insufficient national penetration at the time, the aristocratic stance of its participants, the disagreements in its inner circles and the definite splitting of the group by the end of the 1920s - these are some of the facts that destabilize the group's congratulatory reception. Additionally, the modernists of São Paulo are accused of employing a "rhetoric of racial supremacy" (12) and of embracing primitivism in order to present themselves as exotic to European observers (11).

In this sense, the reader is led to infer that Rio de Janeiro did better - and earlier. The isolated attitude of its Paulista counterpart, encouraged by the alliance to modernistic European streams, prompted them to ignore Brazilian mass media and popular culture and promote racial stereotypes. Meanwhile, Carioca modernism was unequivocally urban and more attuned to local questions of race and class, allowing a coexistence of popular and mass culture, old and new, rural and urban, sacred and profane (22). The comparison between the two cities, even when underlying, permeates the whole book.

Out of a total of five chapters, it is in the first three - arguably the most solid part of the book - that Cardoso delineates the expressions of Rio's modernistic experiment. Chapter one explores the appearance of the first shantytowns, a development followed with curiosity by political and cultural instances alike. A distinguished trace of Rio's modernization process, the so-called favelas were first associated with crime and disease, and seen as an obstacle to civilization (34). Such a view yet coexisted with more sympathetic ones, voiced in the illustrations of Arthur Lucas, the chronicles of João do Rio, the photographs of Augusto Malta, and the paintings by Gustavo Dall'Ara - not to forget the particularly early example of Eliseu Visconti's 1890 painting "A Street in the Favela", remarkable for its precocious social concern.

Cardoso successfully articulates several sources and media, demonstrating the plurality of Rio de Janeiro's cultural landscape. His aim, here, is to oppose the ways Rio de Janeiro and São Paulo portrayed favelas, which brings Tarsila do Amaral's painting "Favela Hill" (1924) to the center of the discussion (49). Unlike the stereotypical Afro-Brazilian characters in Tarsila's paintings, the portrayal of favelas in Rio had, in comparison, remained ethnically ambiguous. According to Cardoso, the "colorful palette and na&#239f treatment of Tarsila's composition provide a distinctively upbeat representation of favela life - one at odds both with the prevalent view of crime and danger, on the one hand, and with a critique of social injustice, on the other" (49). To Tarsila - and other modernist artists, like Lasar Segall, Di Cavalcanti, and Candido Portinari - the favela presented a motif for formal experimentation with color and perspective: aestheticization, thus, leading to a romanticized view of poverty (49). For the author, this detached attitude towards the favela, argued in formal terms, is reinforced by Tarsila's and her husband Oswald de Andrade's privileged social stance. Their biography - judged from today's vantage point - infects their work.</p> <p>The book's second chapter analyzes Rio de Janeiro's art world between 1900 and 1920, paying particular attention to its links with carnival and bohemianism. According to Cardoso, Rio's singular social geography enabled carnival to operate as a mechanism of social cohesion, offering an "opportunity for subverting established relationships of power and propriety" thanks to "a collectively authorized suspension of social mores" (78). At first a marginalized popular festivity, carnival became a common cultural denominator of Rio's theater, music, dance, fine and graphic art - all elements to which Cardoso dedicates individual attention. Two paintings of 1913, impeccably dissected by the author, testify to the social ascension of carnival: Arthur Timotheo da Costa's "The Day After", and Rodolpho Chamberland's "Masked Ball" were both presented at the National School of Fine Arts' Salon in the same year, confirming that carnival had found its way into more traditional spheres of the art world. For Cardoso, this also shows that traditional institutions were not averse to artistic experimentation (120). This defense, however, exposes one aspect that remains unregarded in the book, namely that even if Rio's painting was modern in subject, in formal terms it remained faithful to the academic style. Meanwhile, in S&#227o Paulo, artists were conversing with languages typically associated with European modernism, such as expressionism, fauvism, and cubism. </p> <p>Bohemianism figures in this chapter, as usually in life, as a unifying power. In "Bohemia" (1903), the Carioca painter Helios Seelinger, who had been a student of Franz Stuck in Munich, depicted significant members of Rio's cultural society in a bar scene. Cardoso interprets the work as a "visual manifesto" (86) of Carioca modernism and cleverly uses it as a conduit for the chapter, coming back to it whenever a new character is introduced. In coherently uniting Rio's modernism into an image, the author is not only flattering the art historian's need for visual documentation but attempting to solve a problem that arises from his systematic comparison - S&#227o Paulo's modernism, despite its flaws, was more cohesively organized as a group.</p> <p>Following the third chapter, where the specificities of Carioca print illustration are delineated, a fourth serves the social contextualization of S&#227o Paulo's modernists. Centered on their notions of blackness and primitivism, this section includes some acid comments that betray perhaps a certain disdain towards the group. What makes a belligerent tone unnecessary is precisely the strength of Cardoso's thesis. Rio's modernism is incontestably more organic: rooted in existing commercial practices and urban culture, it results from a particular experience of modernization and authentically responds to its demands. Modernism and modernity, as the title indicates, are here merged concepts.</p> <p>Lastly, the fifth chapter investigates the complicated notion of a "Brazilian type", whose depiction proved a difficult task. The impossibility "of condensing a concept as abstract and complex [...] into a figurative symbol" (223) is ironically illustrated by the abandonment of a planned monument of the "Brazilian man", commissioned by the minister Gustavo Capanema in the 1930s. Brazilian identity lays everywhere between the Black and White of the book's title - colors that not only establish the extremes of Brazil's complex miscegenation, but also refer to the particular media where Rio's modernism was forged: the black and white of modern press.</p> <p>One might ask whether such a marked opposition between S&#227o Paulo and Rio de Janeiro is necessary for the debate. Published amidst the events that mark the Modern Art Week's centennial, Cardoso's contribution questions the very historiography that encourages the celebratory approach that favors S&#227o Paulo. To advocate Paulista modernism as the utmost Brazilian modernism is to consider the concept in its European application. Meanwhile, to sponsor Rio's experience, as Cardoso masterly does, is to propose a modernism with an alternative meaning - and in doing so, the author delivers more than he promises. Although not entirely unprecedented in its thesis, "Modernity in Black and White" is unique for its art historical perspective: topics long discussed now receive a long due scholarly fundament in a discipline still incipient in the country.</p> <p class="italic" style="text-align: right">Laura Ammann</p> </div> </div> </div> <div id="page_footer"> <div class="ie6_font_size" id="separator"></div> <p>issn 1618-6168 / www.sehepunkte.de <img height="10" src="/images/sp10.jpg" width="10"> </p> </div> </div> </body> </html>