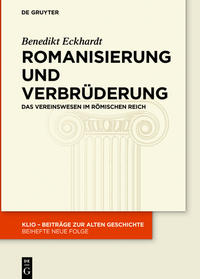 Drawing on a rich repository of literary, epigraphic, and papyrological data, Eckhardt demonstrates the isomorphic process in which the Roman state shaped associative life even as the associations contributed to the development of imperial identities across the Empire. The opening chapter focuses on how associations developed under the Romans, the contributions they made to the organization and maintenance of the state, and their constant potential for subversion. He eschews a homogenized "Romanization" in favor of local peculiarities, while still recognizing that patterns existed across the provinces. He convincingly points to the symbiosis between understanding associational life and understanding political hierarchies and social order at the civic, provincial, and imperial level.

A chronological history of Roman legislation on associations takes place in the second chapter. Focusing on the legal and literary texts, which emphasize the ban on associations, Eckhardt concludes that regulatory practices of the Senate promoted rather than prohibited formation of associations by establishing what a legitimate group would look like and rewarding it insofar as such groups mimic and support the res publica. In chapter three, Eckhardt argues that the collegia of fabri (builders), centonarii (textile workers), dendrophori ("tree bearers") were not private associations but rather semi-public organizations, since they were integrated into state structures and had official recognition as associations, a status Eckhardt extends to many other occupational associations in the western provinces. He includes in this semi-public category groups of veterans and Jewish groups, which received state privileges, along with groups that explicitly express their loyalty, such as the Augustales and the worshippers of Antinous in Lanuvium.

In chapter four Eckhardt argues for a private association system that brought together people who, due to limited resources, posed no real threat to the Roman order, and existed in contexts where the level of organization generally appears to be low. Unlike in the semi-public associations, religion plays a very large part in these private associations. Through detailed examination of documentary evidence from the Roman west Eckhardt arrives at relatively hard distinction between semi-public occupational associations and private religious associations, rightly recognizing that the former could have a cultic dimension and the latter could have some involvement in their urban political contexts. What this sets up, however, is a functional differentiation in the Roman association system that coheres with the literary evidence, particularly the legal texts on association law in which the professional associations have much more power and attract more significant political and elite attention than the religious associations.

Although the textual evidence is much slimmer for the Roman East, the few extant texts that indicate some form of legislation convince Eckhardt that there remains in place regulations around gaining formal approval, fear of legislative dissolution, and focus on the common good, and thus a semi-governmental character to all associations in that half of the Empire. The terminological isomorphism and similarity in internal practices drawn from documentary evidence confirm a connection to the Roman legislative process that governed western associations. The evidence for private associations having such characteristics is quite slim, however, particularly given that much of the evidence Eckhardt points to comes from groups that scholars have already agreed have a semi-public character in the Roman period: veterans, neoi, and gerousia. Nevertheless, it is clear that the associations are closely interlinked to city and state through common ideas and values. This was not forced upon them by the municipalities or the state but reflects an independent appropriation and internalization of how power dynamics work. What this looks like is taken up in detail in chapter 6, where Eckhardt examines the impact of the Roman presence on professional associations, the neoi, and the gerousia in the east, which results, he concludes, in a transformation of the club system so that it reflects the situation in the west. Legal recognition has turned many private groups into semi-public associations while formerly municipal institutions have become partially privatized. Those associations that did not or could not take part in this process were pushed further into the private sphere.

Chapter 7 looks at the development of associations that fall outside of the Roman regulatory framework and how they helped local peoples navigate Roman imperial ambitions while preserving local traditions, drawing principally from cultic associations. Despite the seeming diversity arising from his region-specific analysis, Eckhardt maintains that a well-known model of legitimate associative organization was the foundation from which local variations can be interpreted and analyzed, often by recourse to associations building on their past but more importantly attempting to imitate and integrate into Roman culture.

The eighth chapter moves beyond the local to look at associations that transcended boundaries across the empire, particularly groups of actors and athletes and new cult associations such as those adhering to Mithras or Isis. Unlike the others, these groups developed without state support but also without potential danger; they were fully accepted into state structures - the actor/athlete groups because they shared mutual interests with the state and the new cult groups due to their focus on personal religious experience which pushes them into the private sphere. This was not the case, however, for the Christ cult, whose identification with urban or imperial values was weak and whose translocal networking strong. As a result, they were not recognized as a collective in the Roman Empire and do not fit into the institutionalized isomorphism that Eckhardt argues was the case for associations.

In a rather brief final chapter Eckhardt attempts to explain how such a maligned group rose to a place of acceptance and influence. Since Christians had never been part of the "rigid association laws" imposed by the state from the republican period onwards, they were free to grow and proliferate, in large part because the landscape of what was considered an "association" changed from the beginning of the third century. The Christ groups stood outside this process as differentiated and, after a destabilizing third century, were recognized by Constantine, bolstered by his own beliefs, as a means to strengthen state control.

The taxonomy of semi-public verses private associations that Eckhardt develops in the early chapters of the book is a good heuristic for conversations about the groups, even if one does not fully agree with the extent of the public reach (semi or not) of the occupational groups. Even Eckhardt himself recognizes that his taxonomy is open to reinterpretation (100). Ultimately, through Eckhardt's frequent pointing to how the choices we make in the selection of evidence - what to include and what to exclude and what questions to ask of that which is included - can determine the results we get is an important reminder to anyone working with inscriptions that all conclusions are tentative and open to constant re-examination.

Methodologically, Eckhardt seeks to overturn the use of a "Greco-Roman" paradigm by emphasizing what is essentially and specifically Roman. Given the plethora of data now available, a localized approach makes much sense. Nevertheless, by separating out Christianity as not part of the broad swath of identifiable semi-public and private associations Eckhardt seems to be in a position of claiming Christian exclusivity (and thus superiority), even if inadvertently. There is no denying that Christians formed groups, but by not classifying them as "associations" (which is first and foremost a modern scholarly taxon) they stand apart in Eckhart's work as sui generis within the vast array of group behaviour in the Roman period.

Overall, this book is rich in detail and clear in its argumentation and an important contribution that will propel many conversations forward. There is much to digest, lots to agree with, and space for re-analysis and re-interpretation. It should not be ignored by anyone working on social formations in the ancient world.