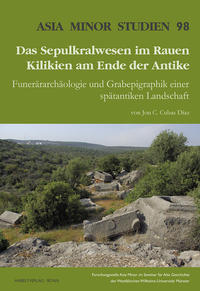 This revised version of a 2018 PhD thesis from Heidelberg examines the funerary culture of coastal eastern Rough Cilicia on the south coast of modern Turkey in the Late Roman period, i.e. the fourth to early seventh centuries CE. After a short introduction to the scholarly literature and the history of the region, chapter 2 describes the sites covered, chapter 3 introduces the epigraphy, and chapter 4 discusses the funerary monuments, followed by a fifth analytical chapter and a conclusion. The arguments are generously illustrated with 91 pages of plates with photographs (many taken by the author), maps, plans, and graphs, some in colour; though convenient for the publisher, the separation of illustrations from the text does involve the reader in a lot of flipping backwards and forwards. Finally, there is a useful set of indices, including subheadings by buildings within the lemma for each site.

The sites covered are the part of Rough Cilicia to the east of modern Silifke, i.e. the cities of Diocaesarea, Sebaste, and Corycus and the villages at Kanlıdivane, Karakabaklı, Işıkkale, and Susanoğlu (ancient Korasion). All these sites are well-known and their ruins have often been studied, though only Sebaste has been well-excavated. Cubas Diaz has decided to omit other sites in this region like the city of Olba (perhaps because of Emel Erten's ongoing research), and villages at Imbriogon, Paslı, and Cambazlı, all of which also offer interesting (though earlier) funerary archaeology. This geographical focus also prompts questions about how far this coastal area differs from the interior. The selected sites do show well that funerary practices could be very local, as suggested by the presence at Corycus of 662 late Roman inscriptions, many specifying the deceased's occupation, far more than the 58 inscriptions that do not mention occupations at the similarly-sized city of Sebaste only 3 km to the north-east. These differences are also nicely brought out in the discussion of the words for tombs preferred in different communities (84-86, 102). The focus on understanding of this part of Cilicia as a group of micro-regions makes this volume more than a rereading of the older material in MAMA 3 (Keil and Wilhelm 1931) and Machatschek (1967), taking into account as it does recent publications on Diocaesarea (Linnemann 2014) and Kanlıdivane (Aydınoğlu 2015), and the synthetic volume on funerary practices in Cilicia and Isauria by Er-Scarborough (2017). However, within this micro-regional approach variations between villages and cities could be further explored, i.e. should we think of villages as just smaller versions of cities or were they different sorts of societies?

Almost all Cilician tombs have long since been robbed, with the exception of two examples at Sebaste, so that our knowledge of funerary culture is heavily dependent on the tombs and inscriptions. Some of the limits this imposes can be seen in the section on the similarity between Christian and Jewish tombs and inscriptions (149-150), highlighting the loss of other forms of evidence that would have shown very different funerary beliefs and practices. Although approaches like those of Ian Morris, Death-Ritual and Social Structure in Classical Antiquity (1992) are hard to apply to the evidence that we have for Cilicia, they remain good to think with.

The discussion in chapters 2-4 is generally at a very high-level, supporting the generalisations with footnotes (containing much up to date literature), rather than a detailed discussion of particular case studies. Thus, there is no mention of the difficulties in dating the inscription (MAMA 3.81) describing a Zeno as consul from Diocaesarea (23, 98n617) or of Patlagean's 1977 analysis of the Corycus inscriptions (89-92), though Trombley's 1987 article is cited. In chapter 4, the analysis of the funerary monuments broadly divides them into three main groups. Most spectacular are built tombs, which includes towers (107-108), (plate 46 shows photographs of towers at Diocaesarea and Imbriogon, though the photograph and text don't make clear the differences between these structures, Diocaesarea being 14.85 m high and visible from further away than the much smaller Imbriogon monument), funerary temples (109-111), and grave houses (111-112). The two other major categories are rock-cut graves (114-116) and sarcophagi (117-121), the latter being the category with the most inscriptions. Chapter 5 synthesizes the conclusions from the earlier chapters, emphasizing both spatial variation within the study region and temporal change since the early Roman Empire. Particularly important is the change in epigraphic and monumental expression between early and late Empire, moving from a focus on families to a focus on individuals, and thus a lesser attestation of women and children in the later period inscriptions.

Overall, this is a useful and up-to-date assessment of the archaeological and epigraphic evidence for central late Roman Cilicia that is particularly valuable for its micro-regional focus and the determination to think about what the tombs and inscriptions tell us about the people who lived, died, and were buried here.