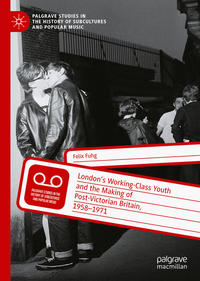 Felix Fuhg's London's Working-Class Youth and the making of Post-Victorian Britain, 1958?1971 is a detailed and ambitious work. It combines Cultural, Social and Urban Histories in a brave attempt to cover a period of unprecedented change in British post-war youth cultures. It provides a thorough distillation of a wide range of secondary and archival-source material ranging from teen magazines to the immense body of research from the Centre for Contemporary Cultural Studies (CCCS) in Birmingham. The book is user-friendly in that it is divided into clear chapters and sub-sections covering historical context, employment, subcultures, social change, pop-culture, fashion, urban development as well as youth venues. In these respects it is a useful contribution to the available literature on youth culture.

The decline of the British Empire, Fuhg argues, created a space for the country's youth to "renegotiate" new patterns of identity. Post-colonial influences certainly made their mark. Fuhg shows how London's youth enjoyed a new popular music with international inspirations and appeal. London's youth culture was shaped by its time and place, embodied in new housing estates and urban landscapes which combined with Victorian infrastructure and values to present a new, confident attitude. This was in a climate where Britain's weakening political position was being replaced by a burgeoning popular culture demonstrated by young people's fashions, music and style.

Terms like "working class", "youth" and "youth culture" are difficult to define, and it would have been useful if Fuhg had been clearer about the age range for his area of study. There is a wide difference between the experience, financial situation, physical maturity, as well as political and cultural awareness between a teenager who might attend a youth club at thirteen and a twenty-two-year-old who might go to a Central London coffee bar. Fuhg's lack of a cut-off point regarding the upper age-range can cause confusion. This occurs, for example, in his detailed chapter on fashion in the high street where he addresses the subject of boutiques on King's Road, Chelsea. The cost of designer clothes in these shops, for example, by Mary Quant, would have been unaffordable for most working-class teenagers at a time when economy led many girls to make their own dresses and skirts. Expensive boutiques like these are more an example of the commodification of youth fashion being sold to the rich or gullible. Fuhg's book races past contested areas and needs to slow down to take on board some of the prevalent complexities, ideological contradictions and conflicts. The Rolling Stones brought out the single "(I can't get no) Satisfaction" in 1965 which robustly challenged material culture and consumerism and struck a common chord among the youth of the time. There were profound ideological debates within youth culture in this period which Fuhg needs to address.

Many of the areas call out for more depth. Research and references are issues here. There are numerous footnotes. For example, chapter 9 has over 700, and Fuhg's references range from reliable academic sources, historical authorities and serious national newspapers like the Guardian, to tabloid and local press, and teen magazines. Fuhg's wide textual research must be applauded, but when there are so many secondary references it can make it hard for the author to thoroughly check each one. He uses reader's letters to teen magazines like Rave, Jackie or Boyfriend as evidence of general youth behaviour and attitudes. These letters (which are not necessarily from authentic teenagers) can be useful illustrative sources, but they do need to be supported with more substantial research in order to establish general cultural trends.

Fuhg has rightly questioned some of the semiotic approaches put forward by some sociological and cultural theorists from, for example the CCCS, choosing instead a more sources-based treatment. Unchecked secondary sources, however, can perpetuate cultural myths. In a discussion on cultural fusion Fuhg cites the Miss World competition held in London in 1963. It was won by Carole Joan Crawford, and Fuhg uses it as an example of black models being "accepted in the world of fashion." (264) Jamaica is a multi-ethnic country, and Fuhg omits to explain that Crawford's title has been criticised due to her relatively fair skin and Caucasian physique. Indeed, her title can be used to argue the opposite point - that "blackness" hadn't been considered seriously in the fashion world. Fashion, instead, conformed to a Westernised stereotype of beauty.

Fuhg's discussion of pop music and the notion or concept of "Britishness" is particularly interesting. Here he charts the global influences that went into what, in chapter 6, he calls the "British Invasion". These include, not just the most obvious and established influences of American jazz and rock & roll but also the significance of music from the new generation of Caribbean immigrants which made a lasting impression on artists such as Georgie Fame and made West Indian calypso and its fusions an established part of the London music scene. He also notes how Beatles and Rolling Stones songs were infused with global influences and included exotic instruments like the sitar.

Fuhg's investigation into the Mod subcultural group and their fashion is inciteful, though a little unbalanced, because he devotes much less space to other contemporaneous groups like the Rockers which went hand-in-hand with the Mods but had different musical tastes and dress styles. His treatment of youth venues from coffee bars to youth clubs in chapter 9, as well as drug distribution among the young, adds to the existing literature in a lightly researched area. Here his detail is let down somewhat by unsupported generalisations like "London's youth fell in love with Soho," (351) when most young people would never have been to Soho.

A final note: Fuhg's research on London's youth culture from 1958 to 1971 could be developed further through ethnographic research. Most of the people who were youths at the time will be alive and no doubt keen and willing to talk about their experiences if they were given the opportunity.